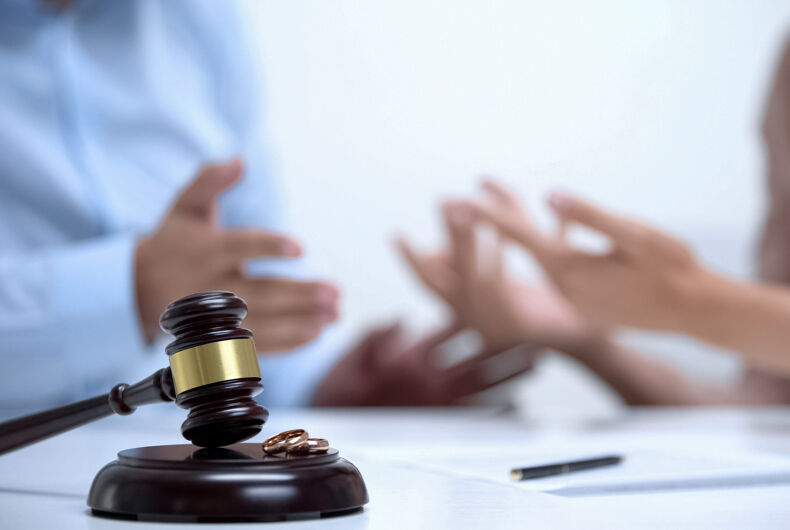 After years of legal battles amidst a media frenzy, a Texas court has granted nearly all custodial and parental rights of a trans girl to her mother, under the condition that her father has regular supervised visits, and the mother does not consent to any gender-affirming hormone or surgical treatment while the child is in her care.

Luna Younger, now eight years old, became the center of a right-wing media blitz on trans youth and gender affirming healthcare over the last two years when her father, Jeffrey Younger, claimed that her identity was being forced on her by her mother, Dr. Anne Georgulas.

Jeffrey further claimed that Georgulas, a pediatrician was trying to force Luna to “permanently” transition through gender-affirming care, although she denied that.

Last week, Judge Brown issued her determination, concluding that Jeffrey “failed to timely make the payments of child support, medical support and interest as [previously] ordered,” and noted that he only began making payments when Dr. Georgulas notified the court.

Based on Jeffrey’s “unwillingness or inability to follow the order designed to serve the best interests of the children,” Judge Brown “finds that it is necessary for the health and safety of the children” to place both of them in the care of Georgulas. Georgulas can now solely determine the children’s primary residence, legal representation, education, extracurricular activities and appearance.

Georgulas can also determine the children’s medical, psychiatric, and psychological care exclusively, but cannot seek hormonal therapy, puberty blocking treatment, or gender-affirming surgeries for the children “without the consent of the parents or court order.”

While very few transgender minors get any form of surgery, puberty blockers are only useful when a transgender person is young. Waiting until several years after puberty to begin any medical treatment results in irreversible and unwanted changes to a trans person’s body that can make gender dysphoria – the distress a person feels when their gender identity doesn’t match their sex assigned at birth – much worse.

That hasn’t stopped many conservative lawmakers all around the country from trying to ban gender-affirming care for youth, partly inspired by right-wing media’s framing that children are being forced to transition medically.

Luna’s story has been used over the years to promote such a theory in conservative media, and conservative to alt-right media such as the Texan, the National Review, and the Federalist continue to deadname and misgender Luna. They have concluded that she is identifying as trans “against her father’s wishes,” even after the ruling.

The order from Judge Brown also orders regularly supervised visitation for Jeffrey with the children at his “sole cost and expense,” the continuation of child support, and the continual of court-mandated therapy for the children and both parents.

Both parents also have to pay for a court-appointed amicus curiae to ensure the “ensure the safety and welfare of the children” and report to the court.

Remember the case of Luna Younger? Welp, courts have granted her mother sole custody. Dad only gets supervised visits. Also, despite raising raising over a 100k from anti-trans forces, Jeff Younger hasn't been paying his child support. https://t.co/3OQfKKVxE2

Won't share the Federalist article, but apparentlly full custody of Luna Younger has been awarded to her trans-affirming mother, Anne Georgulas. Of course, the Federalist points out that the judge is a Democrat and ingores the SCAM ARTIST BEHAVIOR of the dad, Jeff Younger.

In 2019, Luna’s story caught the attention of conservative media. The girl’s mother, as well as medical professionals who worked with her, say that Luna is transgender, but her father says that his daughter is actually a boy and that her mother is forcing a transition on her.

The parents disagreed on much more than her identity, eventually dueling in court over issues such as their children’s haircuts, but when Dr. Georgulas initially sued for sole custody in court, her argument in part was that Younger was not fit for sole custody because he refused to acknowledge Luna’s gender identity.

The issue went to trial (In Texas, custody trials are still held before a jury.) After hearing the case, 11 of the 12 jurors ruled that Georgulas should have sole custody and conservatorship over the children.

Then, the judge overseeing the trial then set aside their ruling on the basis that “the state of Texas has no compelling interest to justify such interference… requiring the father to affirm the child and honor the child’s choices.”

Georgulas appealed that judge’s decision, she was recused, and the case was remanded to a different jurisdiction and court in December 2019. Since then, the court has issued several temporary orders dividing the parents’ responsibilities between them until an agreement could be reached.

Younger began mounting a public campaign for the government to intervene after Georgulas contended that their daughter identifies as female and now goes by the name Luna.

Even after he was ordered to stop commenting publicly on the case, conservative media outlets began presenting the story in late 2019, after several “save [Luna] Younger” campaigns and social media pages (allegedly manufactured or supported by Jeffrey) kept gaining popularity.

A “petition” by the anti-LGBTQ right wing site LifeSite News gained tens of thousands of signatures in support of stopping any affirming of Luna’s activity. Texas Gov. Greg Abbott (R), using her deadname, tweeted that he would have the Texas Attorney General’s Office and Department of Family and Protective Services “look into” it.

Sen. Ted Cruz (R-TX) claimed that Luna is “a pawn in a left-wing political agenda,” while Rep. Dan Crenshaw (R-TX) remarked that “A 7-year-old can’t possibly make this decision or understand it. Parents should know better,” adding that he hope Younger “receives the public support he needs.”

The claim that Jeffrey was trying to “save” his seven-year-old child from hormones and surgery, which were unlikely treatments for a child her age, was repeated. In reality, she had begun socially transition, and evidence was submitted to the court that showed that Luna identified as a girl, even when neither of her parents weren’t present, and denied being told to identify as a girl by her mother.

Neither parent have publicly commented on the matter since this ruling.

Judge Brown’s order is called “temporary” in the ruling, but does list an end date and appears indefinite. For now.

Marjorie Taylor Greene is seething. Trans kids can use Twitter but she’s been banned.