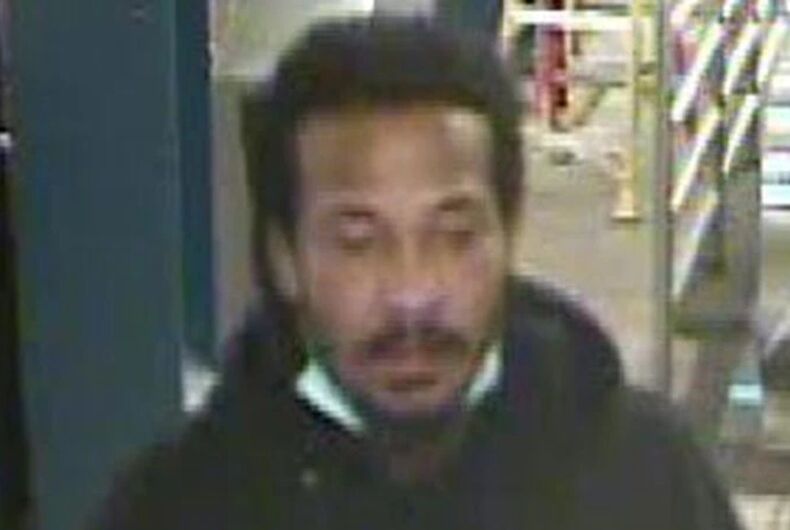 Officers with the New York Police Department (NYPD) are searching for a suspect who attacked a kind male stranger after he realized that stranger was in a same-sex relationship.

The attack happened at 2 a.m. on November 15.in the 57th Street/7th Avenue subway station after the suspect had asked the victim if he could borrow his cell phone. He allegedly became angered after he saw that the victim’s cell phone had a background photo of himself with his boyfriend.

The suspect then allegedly called the man a homophobic slur, slapped him, and threw his phone to the ground before leaving the station, the NYPD said. The slap left the victim with a busted lip but no other injuries.

Even though the attacker escaped, subway security cameras captured his image. The NYPD has released these images in hopes that people will help identify him.

Incidents like this one have been on the rise in New York City. Hate crimes there have risen over 100 percent in the last year, according to an NYPD report released in early December.

That percentage accounts for all hate crimes, including those based on race and religion. Cases of hate crimes directed specifically at the LGBTQ community are up even higher. Throughout the city, anti-LGBTQ hate crimes rose 193 percent over the last year. In 2020, police received reports of 29 victims of anti-LGBTQ hate crime attacks. In 2021, that figure rose to 85 victims.

Nevertheless, the NYPD said that its hate crimes arrests are also up about 100 percent compared to last year. Officers have reportedly completed about half of their hate crime cases.

The NYPD’s Hate Crimes Task Force includes a civilian Hate Crime Review Panel, consisting of a diverse group of community members who review cases to determine whether certain attacks are based on bias against specific community attributes.