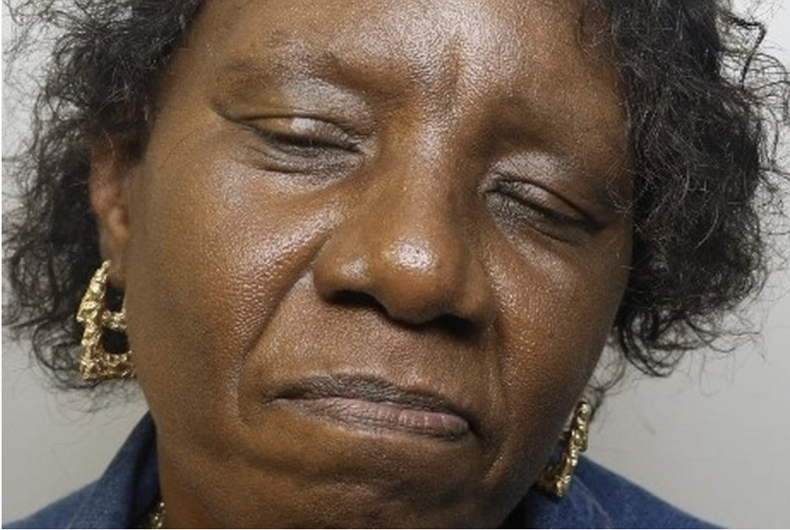 A 64-year-old grandmother has been found guilty of harassment after spending several months terrorizing a gay couple who lived next door.

On Wednesday, the Bristol Magistrates Court in the United Kingdom sentenced Elvira Baptiste – a mother of 10 and a grandmother to more than 20 – to 16 weeks in prison for her treatment of couple Dean Griffiths and Andrew Knight, according to Bristol Live.

A statement from Griffiths read during the trial expressed how Baptiste’s harassment was so bad that it drove the couple to move.

The first incident occurred when she yelled at them to pick up after their dog, and shouted, “You stupid fucking queer.”

From there, Baptiste loudly played offensive songs, continued to hurl slurs at them and tell them they were not wanted there, and even hung homophobic posters in her windows. One poster said, “Wicked lives must burn in hell on judgment day.” Another referenced a “mangina bitch.”

One song she played loudly at least seven times was called “Boom Bye Bye” and discussed shooting gay men in the head. She refused to stop playing it until police told her to stop.

In another incident, she told the couple to “Fuck off” while holding up a soiled tampon.

“I have experienced forms of hate before, but never to this extent,” Griffiths said. “She comes from a place of aggression.”

He added that Baptiste “seems to be watching us all the time…We can not use our garden as it feels like she is watching us. I am not sleeping very well and our relationship is suffering.”

A statement from Knight expressed that he has needed therapy due to the abuse.

“Why would a human being behave like this?” Knight said, adding, “It appears she is enjoying watching us suffer.”

Baptiste has maintained her innocence and claimed that Knight and Griffiths were also hostile to her and that they threw objects into her garden.

Baptiste’s lack of remorse, along with the fact that she has not been diagnosed with any mental health issues, contributed to the guilty verdict.

“As a mother of ten and a grandmother of more than 20 children, I would expect you to understand the importance of people’s mental health and how to respect people,” the judge said.