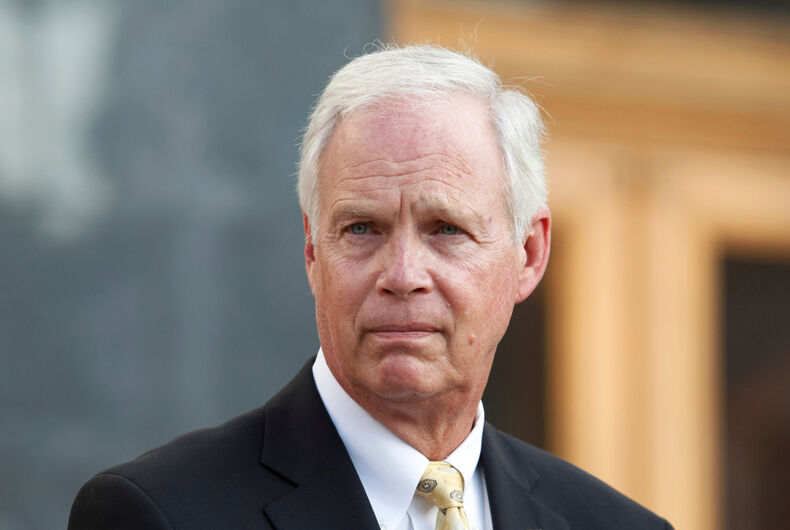 Sen. Ron Johnson (R-WI) accused Dr. Anthony Fauci of overstating the dangers of the Omicron variant of the COVID-19 virus on a Fox News podcast yesterday. Johnson said that Fauci had “overhyped” the AIDS crisis too.

Yesterday was World AIDS Day. More than 700,000 Americans have died from an illness related to HIV.

Johnson has a mixed record on LGBTQ rights, but is generally considered somewhat moderate on queer issues. But when it comes to the coronavirus, Johnson is firmly committed to spewing dangerous Republican misinformation.

“Fauci did the exact same thing with AIDS. He overhyped it,” Johnson told Fox and Friends co-host Brian Kilmeade. “He created all kinds of fear, saying it could affect the entire population when it couldn’t. And he’s doing, he’s using the exact same playbook with COVID, ignoring therapy, pushing a vaccine.”

While he co-sponsored legislation that would exempt individuals and groups from nondiscrimination laws if they cite their religious beliefs  “based on their definition of marriage or beliefs about premarital sex,” in other areas Johnson has been a quiet supporter.

But he decried former President Donald Trump’s ban on transgender military members, telling reporters, “I think any law-abiding American who wants to serve the nation should be able to.”

And while the senator stressed that he opposed same-sex marriage in 2014 as multiple court cases were still making their way through the legal system, he urged Republicans to turn away from marriage equality as a political issue.

“I’m a pretty traditional guy, almost 60 years old. I think marriage is between a man and a woman. But again if the voters decide that they want gay marriage I’m not going to oppose it,” he said.

“Social issues are going to primarily be decided in the states through the democratic process and that’s the ‘why’ it should happen… I’ll certainly go with the judgment of the American people in terms of where they want to fall on, whether it’s abortion issues or gay marriage or wherever.”

Levine was confirmed and she became the first transgender person to be confirmed by the Senate to a high-level position in the government.

Levine was sworn in as a four-star admiral, making her the first transgender four-star officer in all eight of the uniformed services. Admiral Levine will also be the first female four-star admiral in the U.S. Public Health Service Commissioned Corps.

He earned a score of 0 on HRC’s Congressional Scorecard.

Ron Johnson on Omicron: "Fauci did the exact same thing with AIDS. He overhyped it. He created all kinds of fear, saying it could affect the entire population when it couldn't. He's using the exact same playbook with COVID, ignoring therapy, pushing a vaccine." pic.twitter.com/uL2IMThje7