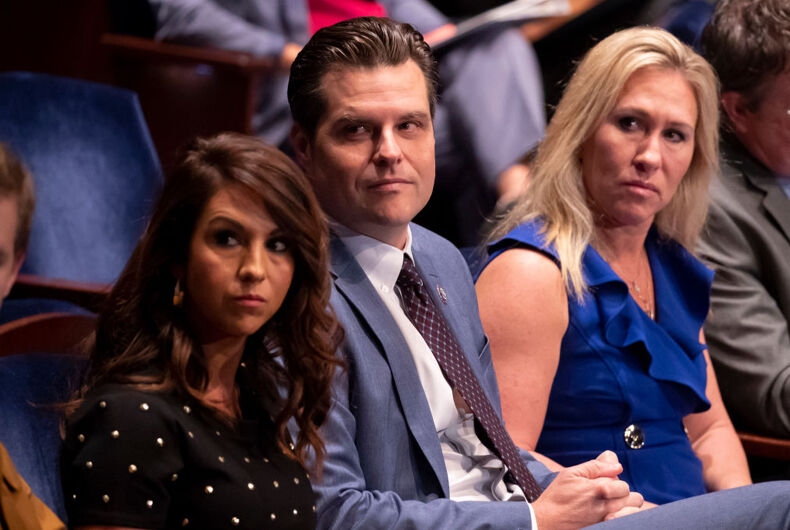 A “grifter,” “trash,” a “religious bigot,” and “tattletale” are only some of the recent insults lobbed between Republican congresswomen Nancy Mace (R-SC) and Marjorie Taylor Greene (R-GA) in their ongoing feud over racist comments made by another GOP flamethrower.

And while House Minority Leader Kevin McCarthy is pleading with the two women to stop fighting in public, Rep. Lauren Boebert (R-CO), the instigator of the drama, paints herself as the victim of it all.

The back-and-forth escalated further on Tuesday as Mace summed up her opinion on “grifter” Greene to reporters saying, “All I can say about Marjorie Taylor Greene is bless her fucking heart.”

At a recent campaign event, Rep. Lauren Boebert (R-CO) made up a story about being in an elevator with Rep. Ilhan Omar (D-MN), which she used to joke that Omar is a terrorist and called her part of the “Jihad Squad.” Earlier this month, Boebert falsely claimed that Omar married her own brother in a speech on the House floor in order to insult the Black, Muslim Congresswoman.

After national outrage, Boebert said she would call Omar to apologize and settle their differences. But both women reported in on social media that the conversation did not end well, with Omar hanging up on Boebert after Boebert demanded Omar apologize for being “anti-American.”

Mace condemned Boebert’s remarks on CNN, saying they were “racist” and “disgusting.” Greene took umbrage on behalf of her closest political ally.

“Nancy Mace is the trash in the GOP Conference,” Greene tweeted. “Never attacked by Democrats or RINOs (same thing) because she is not conservative, she’s pro-abort.”

Mace is anti-abortion but supports exemptions for rape and incest survivors. She is a rape survivor after being sexually assaulted as a teenager.

“Mace you can back up off of @laurenboebert or just go hang with your real gal pals, the Jihad Squad,” Greene continued. “Your out of your league.”

“What I’m not is a religious bigot (or racist). You might want to try that over there in your little ‘league,’” Mace wrote.

A short while later, using emoji, Mace tweeted, “This is what batshit crazy looks like.”

“She’s a grifter, she lies to grift and it’s not okay,” Mace told FOX News. “She is pulling the wool over so many eyes, so many vulnerable people. Lying to them like she’s fighting for them. She has no power, she has… she’s done nothing for America or the American people since she got elected to Congress. She doesn’t have the ability to. Meanwhile, I’m passing legislation to help gold star families.”

“She hasn’t done a damn thing since she got into office.”

Greene, upset that she was being called out by fellow Republicans, ran to former President Donald Trump to complain.

“Just had a great conversation with President Trump about @NancyMace,” Greene tweeted after the call. “I absolutely love President Trump. He’s our leader!”

“Don’t look now, but it’s MTG unable to take the heat, running to the principle’s office to tattletale because she can’t stand on her own two feet,” Mace replied, retweeting Greene. “Bless her heart.”

Don’t look now, but it’s MTG unable to take the heat, running to the principle’s office to tattletale because she can’t stand on her own two feet.

Boebert, however, spent the day trying to raise money off of the controversy, whining that “the left has launched unprecedented attacks on me.”

The Left has launched unprecedented attacks on me these past few weeks.

They are trying to stop me from being your voice! I won’t back down.

We will save America! https://t.co/Zo4xyiKCmM

Dr. Oz is running for Senate as a Pennsylvania Republican. He lives in New Jersey.