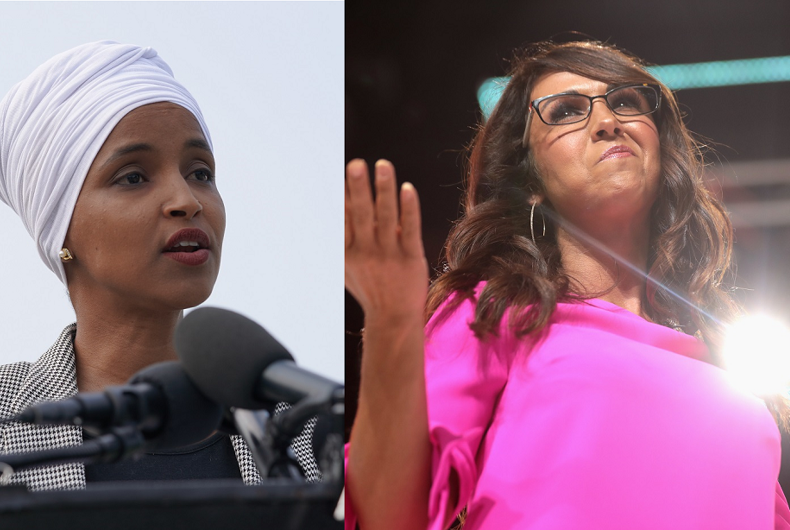 Rep. Lauren Boebert (R-CO) and Rep. Ilhan Omar (D-MN) have been standing off over the past few days after Boebert implied that Omar, who is Muslim, is a terrorist and called her part of the “Jihad Squad” while telling supporters a fictional story about Omar.

After national outrage, Boebert said she would call Omar to apologize and settle their differences. Now they’ve both taken to social media to announce that it did not go well.

“So the other night on the House floor was not my first Jihad Squad moment,” Boebert told a group of supporters. “I was getting into an elevator with one of my staffers and he and I were leaving the Capitol, we’re going back to my office and we get in the elevator and I see a Capitol Police officer running hurriedly to the elevator. I see fret all over his face. And he’s reaching. The door is shutting. I can’t open it.”

“What’s happening? I look to my left and there she is, Ilhan Omar, and I said, ‘Well she doesn’t have a backpack, we should be fine,'” Boebert continued. “So we only had one floor to go and I say, do I say it or do I not? And I look over and I say, ‘Look, the Jihad Squad decided to show up for work today.’ Don’t worry, it’s just her staffers on Twitter that talk for her. She’s not tough in person.”

“Fact, this buffoon looks down when she sees me at the Capitol, this whole story is made up. Sad she thinks bigotry gets her clout,” Omar tweeted in response. “Anti-Muslim bigotry isn’t funny & shouldn’t be normalized. Congress can’t be a place where hateful and dangerous Muslims tropes get no condemnation.”

By Friday, Boebert had issued an apology to “anyone in the Muslim community I offended.”

“I have reached out to her office to speak with her directly,” Boebert wrote.

She said today that she tried to call Omar on Friday and got a chance to talk to her today on the phone. Neither Congresswoman said the conversation went well.

“Today, I graciously accepted a call from Rep. Lauren Boebert in the hope of receiving a direct apology for falsely claiming she met me in an elevator, suggesting I was a terrorist, and for a history of anti-Muslim hate,” Omar said in a statement. “Instead of apologizing for her Islamophobic comments and fabricated lies, Rep. Boebert refused to publicly acknowledge her hurtful and dangerous comments. She instead doubled down on her rhetoric and I decided to end the unproductive call.”

“I believe in engaging with those we disagree with respectfully, but not when that disagreement is rooted in outright bigotry and hate.”

Boebert also spoke to her supporters, and her version of events didn’t differ much: she called Omar, refused to apologize for the discriminatory nature of her comments, and then doubled down on her Islamophobic rhetoric.

“As a strong Christian woman who values faith deeply, I never want anything I say to offend someone’s religion,” Boebert said in a video. “So I told her that.”

“She said that she still wanted a public apology, because what I said wasn’t good enough,” Boebert exclaimed. “So I reiterated to her what I had just said. She kept asking for a public apology, so I told Ilhan Omar that she should make a public apology to the American people for her anti-American, anti-Semitic, anti-police rhetoric.”

This isn’t even the first time this month that Boebert has attacked Omar for being an accomplished Black, Muslim, immigrant woman. On the House floor two weeks ago, Boebert accused Omar of marrying her brother – which is not true – and called her “the Jihad Squad member from Minnesota.”

Full video: Lauren Boebert’s just said she talked to Ilhan Omar and refused a request for a public apology. Boebert told Omar to apologize and ended up being hung up on, calling it “cancel culture 101.”

Fact, this buffoon looks down when she sees me at the Capitol, this whole story is made up. Sad she thinks bigotry gets her clout.

Anti-Muslim bigotry isn’t funny & shouldn’t be normalized. Congress can’t be a place where hateful and dangerous Muslims tropes get no condemnation. https://t.co/S1APT7RbqW