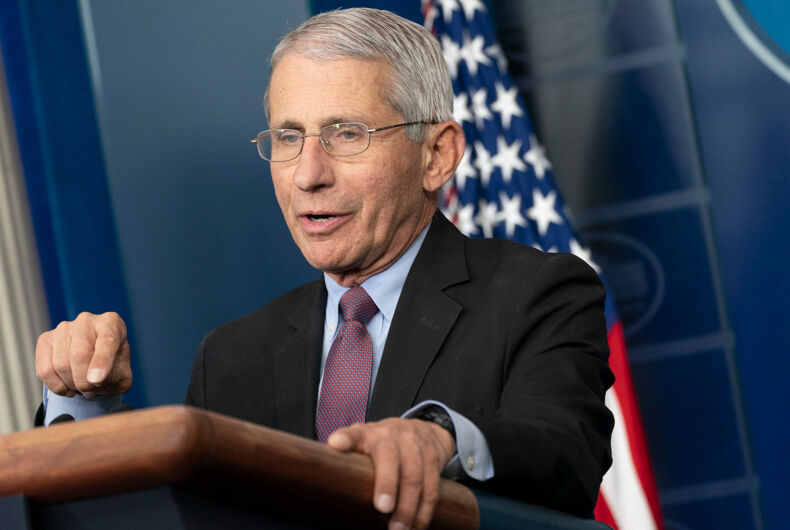 A Fox News host called for the death of Dr. Anthony Fauci, director of the National Institute of Allergy and Infectious Diseases (NIAID), and now Fauci is calling for the far-right pundit to be fired.

Fox personality Jesse Watters was speaking this past Monday at Turning Point USA’s AmericaFest conference when he told conservatives to “ambush” Fauci with questions about gain-of-function research. The relevant rightwing conspiracy theory states that Fauci funded the research to make COVID-19 more deadly at a lab in Wuhan, China, so that he could watch millions of people die all over the world. There is no evidence that this is true.

“Now you go in for the kill shot,” Watters told the crowd. “The kill shot? With an ambush? Deadly. Because he doesn’t see it coming.”

In an interview on CNN yesterday, Fauci said that Watters’s comments were “awful.”

“And he’s going to go, very likely, unaccountable,” Fauci said. “I mean, whatever network he’s on is not going to do anything for him. I mean, that’s crazy. The guy should be fired on the spot.”

Fauci has been the target of Republican ire for the past two years ever since his public profile as chief medical advisor to the president rose because of the pandemic. He criticized Donald Trump’s response to COVID-19 and told people to wear masks and then get vaccinated, which conservative elected officials responded to by accusing him of killing puppies, calling for him to be prosecuted, and telling voters that Fauci likes to watch people die.

“The only thing that I have ever done throughout these two years is to encourage people to practice good public health practices: to get vaccinated, to be careful in public settings, to wear a mask,” Fauci said on CNN. “And for that, you have some guy out there saying that people should be giving me a kill shot to ambush me? I mean, what kind of craziness is there in society these days?”

Fox News stood by Watters in a statement.

“Based on watching the full clip and reading the entire transcript, it’s more than clear that Jesse Watters was using a metaphor for asking hard-hitting questions to Dr. Fauci about gain-of-function research and his words have been twisted completely out of context.”

Fauci has been protected by an armed security detail since April 2020 because of the threats made against him.

There’s finally some good news out about the Biden administration