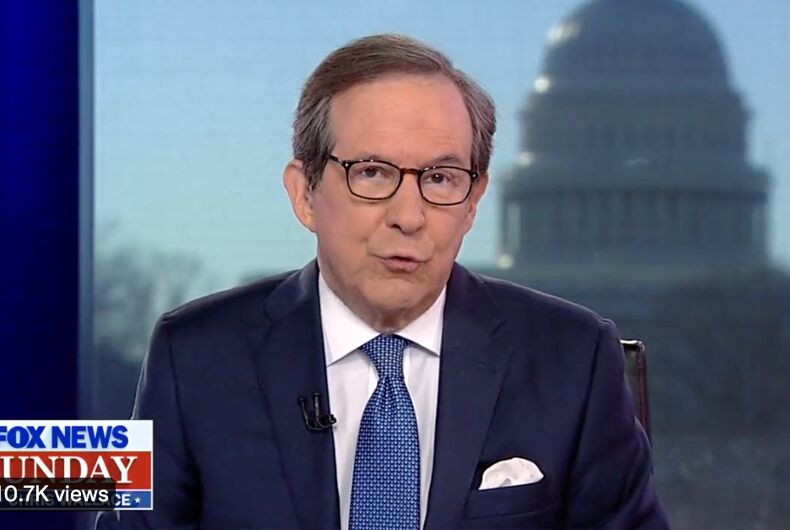 Fox News host Chris Wallace has announced he will leave the networkPhoto: Screenshot

Fox News anchor Chris Wallace announced during his weekend broadcast that it would be the last and he is leaving the network. Wallace is reportedly joining CNN’s streaming service.

Wallace, a 16-year veteran of the network and their last respected journalist amongst a plethora of far-right talking heads, follows the departure of out anchor Shepard Smith. Smith was also known as a journalist rather than a pundit.

While Smith was frequently criticized by the LGBTQ community for working for Fox, he always insisted that it was important to have someone inside the system. His steadfast willingness to honestly describe the Trump administration’s policies for what they were earned him redemption – and angry attacks from the former president.

But when Smith left, the network’s reactions to the news were remarkably different. For once, Fox celebrated the gay man and gave the cold shoulder to the straight guy.

“We are extremely proud of our journalism and the stellar team that Chris Wallace was a part of for 18 years,” the network said in a general statement. “The legacy of FOX News Sunday will continue with our star journalists, many of whom will rotate in the position until a permanent host is named.”

Wallace, also a frequent target for ridicule by the former president, praised the network while announcing his exit, specifically pointing out that the management had never censored his coverage – even when it obviously proved that the angry talking heads were lying to their audiences.

But when Smith fled, the company’s president made a statement himself – and it was much more stellar.

“Shep is one of the most premier newscasters of his generation and his extraordinary body of work is among the finest journalism in the industry,” Wallace said, revving up for more accolades. “His integrity and outstanding reporting from the field helped put FOX News on the map and there is simply no better breaking news anchor who has the ability to transport a viewer to a place of conflict, tragedy, despair or elation through his masterful delivery.

“We are proud of the signature reporting and anchoring style he hones at FOX News, along with everything he accomplished here during his monumental 23-year tenure,” he continued. “While this day is especially difficult as his former producer, we respect his decision and are deeply grateful for his immense contributions to the entire network.”

Smith was slightly more colorful than Wallace and frequently sparred with the primetime pundits and calling baloney on some of their radical conspiracy theories.

Chris Wallace signed a four-year deal with Fox back in 2017. His contract was expiring this year, and he decided to leave. "Fox News Sunday" will have rotating hosts for the time being.

Republicans are already laying the groundwork to overturn elections in 2024