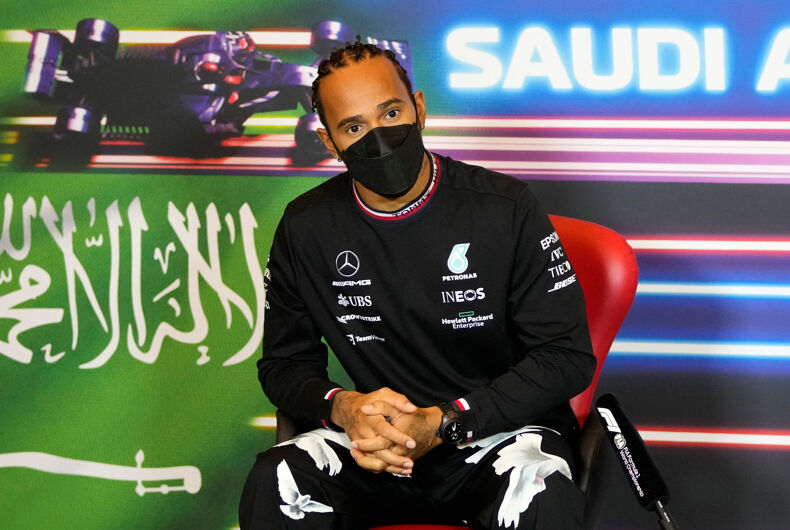 Shortly before this weekend’s Grand Prix race in Saudi Arabia, Formula One drivers are decrying the country’s “terrifying” laws that persecute LGBTQ people and women.

Star racer and seven-time world champion Lewis Hamilton, who also wore a rainbow-striped helmet in a race in Qatar two weeks ago to protest the country’s laws that criminalize gay sex, went so far as to admit he didn’t want to be there.

Related: This gay man is trying to break into a different kind of drag racing

“Do I feel comfortable here? I would not say I do,” Hamilton told reporters during a pre-game press conference. “But it’s not my choice to be here. The sport has taken the choice to be here. And whether it’s right or wrong, while we’re here I feel like it’s important that we try to raise awareness.”

“For the last race, for example, you saw that helmet that I wore. I will wear that again here, and at the next race [in Abu Dhabi]. Because that is an issue that is a law. If anyone wants to take the time to read what the laws are for the LGBTQIA+ community, it’s pretty terrifying. So there are changes that need to be made.”

Hamilton, who is currently in second place for the season, also highlighted the plight of women inside the country.

“There are changes that need to be made,” Hamilton said. “For example, women’s rights. They were only permitted to drive in 2018. But why are some women still in prison for driving many years ago? There are a lot of changes that still need to happen and I think our sport needs to do more.”

Other drivers are also taking a stand for human rights and starting to speak out on social justice issues. Hamilton says they are “duty-bound” to point out the injustices that are being overlooked by the sports authority.

Driver Mick Schumacher wore a rainbow-striped wristband while Sebastian Vettel sported shoes adorned with a rainbow stripe. Vettel told reporters that he had arrived fresh from attending a go-karting event for Saudi women.