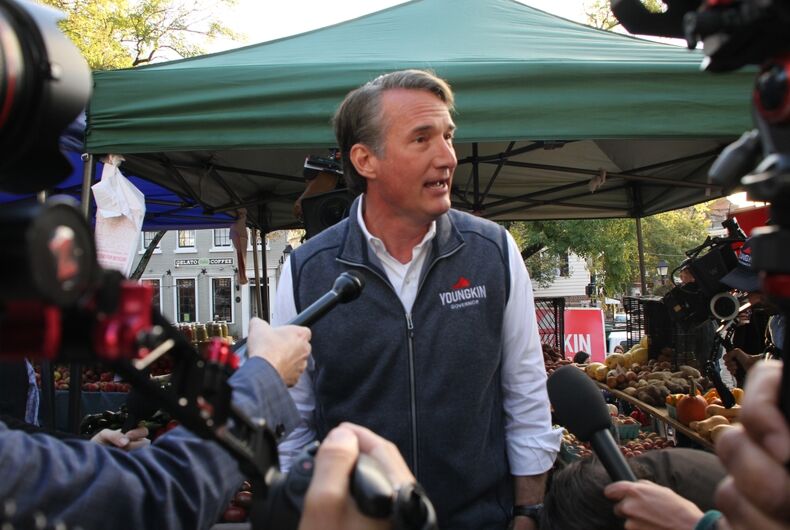 After narrowly winning the Virginia gubernatorial race over a week ago, governor-elect Glenn Youngkin (R) has begun naming officials to his transition team as he prepares to take the oath of office on January 15.

Youngkin, who has already declared that he opposes marriage equality, has already chosen numerous anti-LGBTQ conservatives to ceremonial and official posts who will shape his agenda and staff before he takes office. One of his transition’s top officials wrote the legislation that outlawed marriage equality in Virginia for a decade, and the other has helped build the careers and reputations of anti-LGBTQ conservatives such as Mike Pence and Amy Coney Barrett.

Related: The religious right is crowing they won the Virginia governor’s race by sowing fear of trans people

The transition is being led by Jeff Goettman as Director, but as American Independent details, several other anti-LGBTQ people are involved in the operations as well. The transition is co-chaired by Kay Coles James, who is the former president of the Heritage Foundation, and state Sen. Steve Newman (R), formerly president pro tempore of the Virginia Senate.

After Pence left office facing death threats and a reputation in shambles on all fronts, it was James’ and the Heritage Foundation that swooped in to give him his first post-office venture in February. James said that Pence “frequently collaborated with Heritage and will now continue to do so as a distinguished visiting fellow.”

The Heritage Foundation claims laws that protect LGBTQ Americans from discrimination based on their sexual orientation and gender identity are unjustified, saying they “do not protect equality before the law; instead, they grant special privileges.” Transgender people have been specifically targeted, based on the group’s claim that “[W]e are created male and female and that male and female are created for each other.”

In addition to Pence, other anti-LGBTQ conservatives that the Heritage Foundation helped bloom into stars on the right include current Supreme Court justice Amy Coney Barrett, Clarence Thomas’s wife Virginia, and Trump aide Roger Severino, who helped shape anti-LGBTQ policies in the Health and Human Services (HHS) Department under Trump.

Prior to working at the Heritage Foundation, James was a Reagan administration official who rose to prominence on the right herself by becoming a vice president of the Family Research Council (FRC), now designated an anti-LGBTQ hate group by the Southern Poverty Law Center.

Newman has been in the Virginia Senate since 2006. Despite the state slogan, “Virginia Is for Lovers,” he has ran on opposing LGBTQ rights successfully since the 1990s. In his first year in the Senate, co-authored and sponsored the now-invalid amendment to the state’s constitution that banned marriage equality.

He has consistently voted against removing the amendment, and against any pro-LGBTQ proposal, since 2010. Equality Virginia gave him a 9% rating this year, while the Family Foundation of Virginia has given him 100%.

Youngkin’s campaign hasn’t stopped there. They have named several “honorary” transition co-chairs, starting with former Virginia Gov. George Allen, who most recently served as a U.S. Senator representing the state for one term.

Allen suffered from several controversies during and between both offices. In 1994, while serving as Governor, Allen not only lobbied against LGBTQ rights, but claimed homosexuality was not “acceptable behavior.” He called for homosexuality to remain illegal and said the government should not “condone that sort of behavior.” In 1997, he also signed a law “defending” the “traditional” definition of marriage at the time.

He became a Senator in 2000, with Kay Coles James serving on his staff, and during his time in Washington he sponsored a constitutional amendment that would have banned marriage equality nationwide. Allen also supported Newman’s similar amendment in the state legislature, which proved successful.

He lost reelection as Senator in 2006 in large part due to a video that recorded Allen calling a campaign employee a racist slur. When he ran again in 2012, he once again proudly declared his opposition to LGBTQ rights, pledging on his campaign website that he would not vote in favor of making anti-LGBTQ bias qualify as a hate crime — despite the fact that legislation declaring just that was passed in 2009 and signed into law. He also lobbied against LGBTQ people being allowed to openly serving in the military or receive protections from discrimination at work.

Youngkin’s transition named another former governor as an honorary co-chair: Bob McDonnell. As a state delegate, the state’s attorney general, and then governor for one term, McDonnell regularly opposed LGBTQ rights. He also prevented LGBTQ employees from receiving protections from discrimination at work. As a delegate, he openly claimed a lesbian judge violated sodomy laws in the state after she was accused of sexual harassment, trying to suggest she was ineligible to serve on the bench because of her identity.

In 2014, right as his term ended, McDonnell was indicted, and subsequently convicted, of federal corruption charges. His prison sentence was suspended and his entire conviction was later reversed on appeal.

Youngkin’s transition being heavily influenced by anti-LGBTQ advocates follows a trend set by his campaign. The private equity fund CEO was heavily focused on attacking school boards and educators, while trying to avoid association with Donald Trump and admitting that he opposed marriage equality.

Trump endorsed and campaigned for him anyway, and Youngkin admitted days before the election that he is against same-sex marriage, although he pledges he “will support” that right when he is in office.

Youngkin’s campaign was being run by Goettman as campaign COO, who served in numerous federal posts under the Trump administration prior to the role.

While he spent months avoiding that belief, Youngkin’s actions as a candidate couldn’t have been more clear. He repeatedly denigrated trans people, referred to trans youth as “biological males” who are “not fair” for trying to participate in sports, and was honored at a gala by an anti-LGBTQ group — which itself was supported by hate groups and Trump-affiliated organizations.

The keynote speaker at the event was Trump’s former White House Press Secretary Kayleigh McEnany, who once proclaimed that the man who banned trans military personnel had “a great record when it comes to LGBT issues.”

In addition to Trump, Youngkin had the endorsement of Coles’ former employer and hate group, the Family Research Council.

Ever imagine what a place just for straight men to hang out & make friends would be like?