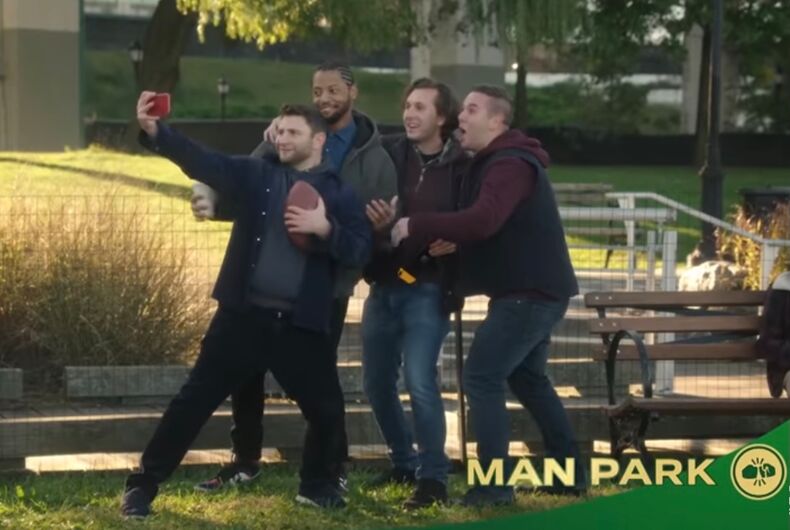 Men "networking" together in the "Man Park." Photo: Screenshot/NBC

Have you ever imagined what it would be like to have a place just for men, bored with nothing to do, trying to connect with others and build friends outside of sexual relationships?

Saturday Night Live imagined such a place. For straight men, that is.

A recorded skit in yesterday’s episode, hosted by The Harder They Fall actor Jonathan Majors and featuring superstar singer-songwriter Taylor Swift as the musical guest, was an ad for such a concept, called the “Man Park.”

“According to studies, many men say they have no close friendships,” a narrator for the ad says, “and three in four report receiving all their emotional support from their wife or girlfriend, often the moment they come home from work.”

The ad shows couples, such as Ego Nwodim and Pete Davidson, trying to navigate the male partner’s loneliness.

“I need you to go out of the house and make a friend so you can talk to other people about this stuff and not just me,” Nwodim’s character tells Davidson’s.

“That’s insane!” Davidson’s character responds. “Where would I go?”

As the ad reveals, there is now such a place: Man Park. “It’s like a dog park, but for guys in relationships, so they can make friends and have an outlet besides their girlfriends and wives,” the narrator declares.

The “ad” features several men “networking” together, which includes yelling at each other, playing video games and rough housing while their girlfriends and wives watch. Men at the park have enough room for their favorite bonding activities, such as determining the “GOAT” (the answer was Bo Burnham), cool down with an IPA, and learning that Vin Diesel has a twin brother.

The different guys bond over repeating names and phrases at one another, such as “rise and grind,” “Marvel,” and “Rick and Morty.”

“It’s not their fault masculinity makes intimacy so hard,” the narrator states.

Of course, ladies get in to the park for free.