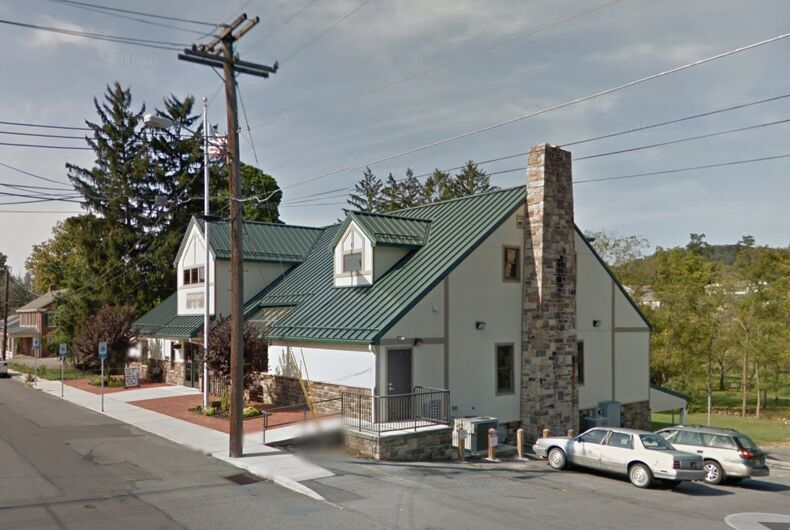 When a pair of bumbling Republican politicians tried to promote their anti-LGBTQ agenda by refusing funds for a local library, their plan backfired dramatically and ended up raising more than seven times the amount of withheld money.

Rural Fulton County, Pennsylvania is a hotbed of Trump country and two out of the three county commissioners are Republicans. They’re upset that an LGBTQ support group hosts biweekly meetings at the local library.

“There’s really no other place for that community to meet in the county… to have a safe comfortable meeting place,” Fulton County Library director Jamie Brambley told the Philadelphia Inquirer.

Already working on a shoestring budget after their funding had been severely cut, the library had requested an extra $3,000 to their measly $15,000 annual budget. But when a flier advertising the support group to the county’s minuscule number of queer residents was brought to their attention, the two men denied the request.

They accused the librarians of supporting “hate groups.”

“If we support them, we have to support Proud Boys and Black Lives Matter,” Commissioner Randy Bunch told the local newspaper. Bunch’s business, a construction company, has an eight-foot-tall mural of Donald Trump on the side of its building.

“Do we want Muslims moving into our county?” Commissioner Stuart Ulsh asked.

“I don’t hate anybody. I’m just saying that LGBTQ and any of those organizations make people upset. I personally think none of them need any part in Fulton County. I don’t dislike anybody; I just don’t want something that’s going to create friction between people,” Ulsh added after the vote.

Emily Best, a local activist and former Democratic candidate for the state senate, started a GoFundMe to raise the money the library needed.

“The Fulton County Library is one of the best parts of McConnellsburg, and really, the entire county. It is a place where people can learn about the world outside of rural Pennsylvania and be exposed to new ideas. When my family lived in McConnellsburg, the library was one of the few places where we felt safe and like we belonged,” Best wrote on the site, hoping to raise the requested funds.

“The library needs the additional support to continue their mission of being a community resource for ALL. Show your support for community libraries and supportive places by donating. Don’t let the hateful ideas coming from leadership be the only voices heard in Fulton County!”

But when word got out about the fundraiser, the contributions started to pour in. And when Lt. Gov. John Fetterman (D) gave it a boost on Twitter, even more money arrived. Over $21,000 has been donated to the library so far.

Calls to ban books with LGBTQ content, as well as content about race and gender, are taking place across the country. School board meetings have become contentious and violent as Trump supporters storm the meetings. The Department of Justice has asked the FBI to look into the threats of violence against school personnel and board members by the far right.

In October, Texas State Rep. Matt Krause (R) demanded schools identify any books they have that cover topics related to sexuality, HIV/AIDS, and STIs, as well as any book that might make students feel “discomfort” or “psychological distress” by “consciously or unconsciously” implying that their race is “inherently racist, sexist, or oppressive,” using language from white parents this past year who protested school districts to stop teaching about racism.

Virginia, however, has been at the center of the debate over book banning, as the state’s anti-LGBTQ governor-elect Glenn Youngkin (R) ran on a platform of supporting “parents’ rights” in education. Two school board members in Spotsylvania called for books on LGBTQ topics to be burnt.

“If you have a worldview that can be undone by a novel, let me suggest that the problem is not the novel,” a school librarian told the shame-faced board members during a contentious meeting this week that pitted angry residents against the two conservatives and their religious right supporters.

The school plans to buy more internet hotspots for locals so they can access the internet and expand their minds outside of the rural community.

How stylist Sam Ratelle rose from the streets to “superstar”