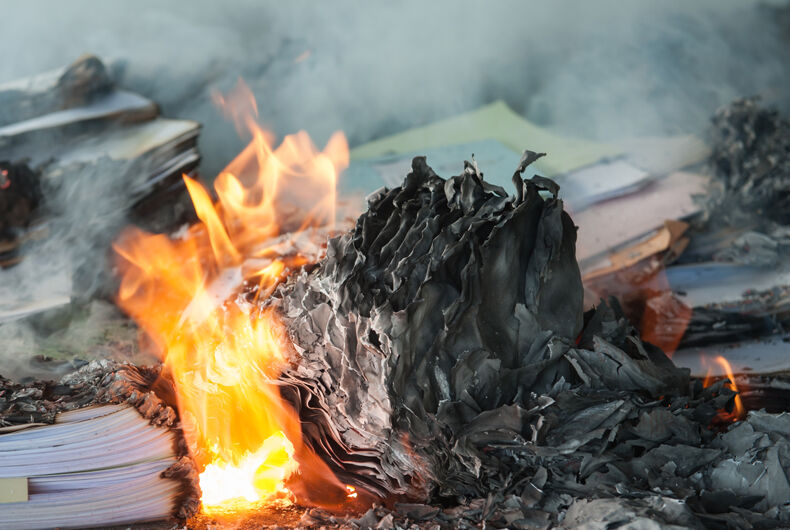 Parents, students, teachers, and librarians were not happy after members of their school board called for book burnings of “bad, evil-related material” in school libraries, and they let them know in no uncertain terms.

“If you have a worldview that can be undone by a novel, let me suggest that the problem is not the novel,” a school librarian said at a Spotsylvania, Virginia School Board meeting last night.

Related: GOP governor cracks down on school libraries after being enraged by “Gender Queer” memoir

Last week, a parent in the district became very upset to discover that LGBTQ content was available in her son’s school’s library after looking through the library system’s app.

So she went to a school board meeting to tell board members about one particular book – 33 Snowfish – that she found there. That book is about a group of homeless teens and contains LGBTQ storylines and discusses sexual abuse, drug addiction, and sex work.

“I think we should throw those books in a fire,” said board member Rabih Abuismail.

“There are some bad, evil-related material that we have to be careful of and look at,” said board member Kirk Twigg, who suggested they “see the books before we burn them, so we can identify within our community that we are eradicating this bad stuff.”

The board voted to remove “sexually explicit” content from the district’s libraries. And after that meeting got some news coverage, parents and others in the community with more mainstream views showed up at this week’s meeting to give the school board a piece of their mind.

“[Your behavior] is the most egregious example of unprofessionalism I have ever witnessed,” one parent said, according to Adele Uphaus-Conner, a reporter for the Free Lance-Star. “The only course of action I see fit for you is a formal public apology to all the librarians in this county & for you to submit your resignation from the school board.”

“You have labeled books you have no knowledge of and placed shame upon them,” said a district librarian. “You have no right to judge anyone or what they read.”

Some people at the meeting explained just how privileged it is to get mad at books that have LGBTQ stories or that discuss racism, as if they’re not important topics.

“This is an opportunity to review the definition of ‘privilege,’” said another teacher. “People searching for books that include heterosexual romance have the privilege of not needing to search for anything more specific than ‘romance.’”

“After reading To Kill a Mockingbird in school, I was never called the n-word again,” one student said. “How long before the color of my skin becomes offensive yet again?”

“If you are scared of a community you are supposed to represent, this is not the job for you,” said another student.

One teacher went to the heart of the matter and responded to attempts by conservatives to paint teachers and public education as the enemy. Such rhetoric on rightwing media has intensified this year, leading conservatives to protest school boards all over the country to oppose mask measures, teaching about diversity in schools, and allowing trans students equal access to an education.

“Parents and community members, keep in mind that your students’ teachers are not your enemies,” one teacher said. “We’re working to make sure your children have the education they deserve. We’re not seeking to undo what you’re teaching them at home.”

“Once you politicized this office, you created an adversarial relationship between parents and teachers,” another teacher said. “You are here to serve the interests of the students.”

The school board ended up voting 5-2 to rescind their ban on “sexually explicit” books in the district’s libraries. According to Uphaus-Conner, the two dissenting board members were Abuismail and Twigg, the same two who were the most extreme the first time around in calling for a literal book burning.