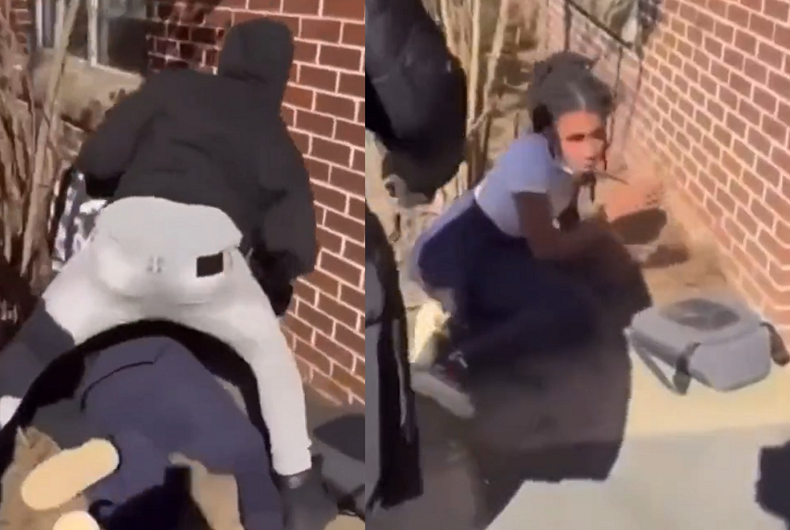 Shantae Payne had only been enrolled at the school for a month when her fellow students pummeled her to the ground and rendered her unconscious.

Cell phone footage, caught by classmates at the school, shows two boys standing over Shantae and beating her while she’s already on the ground. Other students crowd around but don’t help her.

Prior to the beating, her attackers had spent the week threatening her.

“On Thursday she walks down the hall and one of the boys walks right by her and threatens her,” Shantae’s guardian, Blanche Payne, told 11 Alive news. “[They told] her that if she comes back to school ‘we’re going to drag her in the bathroom.'”

Shantae’s attackers have not pulled out of school and it’s not clear whether they will receive disciplinary action. School administrators are currently investigating what happened.

Blanche Payne is calling for their arrest.

“No one has a right to judge or attack someone because they are different,” she said.

Someone saying they are Shantae’s cousin posted video of the brutal beating on Twitter, calling for action against the attackers.

“My little cousin shantae was Jumped by a group of boys at her school on tuesday and the school has not taken any action to make it safe for her to go back,” the tweet said, also including the school’s phone number.

Pebblebrook High School in Georgia the school’s number is 770.819.2521 pic.twitter.com/NTsftmweD8

A statement from the school said, “Administration is aware of the video and is investigating. All involved students will be dealt with according to district policies. We are unable to provide further detail due to privacy laws which protect student criminal and discipline records.”

While all of this unfolds, Shantae said the attackers continue to threaten her.

But she also said she won’t back down.

“People like me are judged every day, we are targeted every day,” Shantae said. “This is a hate crime. This happens all the time and it’s swept under the rug. And me being who I am, I’m not going to let it go, I need to be heard because I have a voice just like everybody else, and I’m going to use it.”