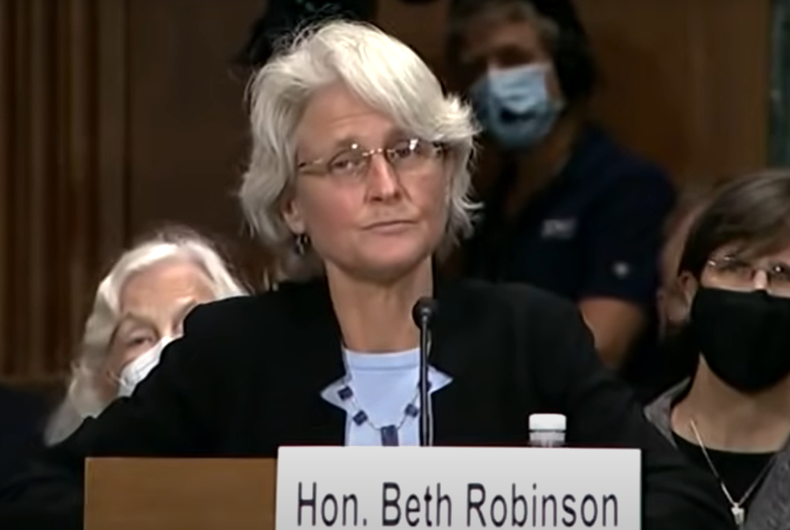 Judge Beth Robinson was grilled by Republicans at her Senate confirmation hearingPhoto: Screenshot/YouTube

Beth Robinson will officially become the first out LGBTQ woman in the country to serve on a U.S. appeals court.

In a 51-45 vote yesterday, the Senate confirmed Robinson to the U.S. Circuit Court of Appeals for the 2nd Circuit, which has jurisdiction in Connecticut, Vermont, and New York. It is a lifetime appointment for the 56-year-old graduate of Dartmouth College and University of Chicago Law School.

Robinson has been an associate justice on the Vermont Supreme Court for the past ten years, where she also made history as the state’s first out LGBTQ supreme court justice.

She is also known for her role as co-counsel in Baker v. Vermont, the first case in the country to grant the same legal protections to LGBTQ couples that are afforded to heterosexual married couples.

“Robinson’s confirmation is particularly historic given the dearth of LGBTQ+ representation on our courts and her legacy of advocating for LGBTQ+ equality,” Rakim Brooks, president of progressive association Alliance for Justice, told HuffPost.

Her appointment also creates a liberal majority on the Second Circuit.

Robinson’s confirmation hearings were not without hostility, though. According to the Keen News Service, she faced intense questioning from Republican Senators, who asked her questions like, “How many biological sexes do you believe there are?” Robinson wouldn’t answer since, she said, a case involving that question could arise in court.

Sen. Ted Cruz (R-TX) also reportedly attacked her for “marked hostility toward religious liberty,” citing a case in which she defended a Catholic pro-choice group after a printing shop refused to print their flyers.

Upon her confirmation, Sen. Bernie Sanders (I-VT) congratulated her in a tweet. “I know you will make Vermont proud and will be an excellent addition to the federal bench,” he wrote.

I want to congratulate Vermont Supreme Court Justice Beth Robinson for her momentous confirmation today to the Second Circuit Court of Appeals. Thank you for your continued service. I know you will make Vermont proud and will be an excellent addition to the federal bench. https://t.co/iJKDxHmEkL

“I am confident she will make all Vermonters & Americans proud,” he said.

BREAKING: Senate JUST CONFIRMED #VT's Beth Robinson to 2nd Circuit on a BIPARTISAN VOTE. An historic nomination—1st openly gay woman to rise to our fed. circ. cts.—of a brilliant, fair, & impartial jurist. I am confident she will make all Vermonters & Americans proud.

While Robinson’s appointment is indeed historic, it also brings to light the lack of LGBTQ representation in federal judgeships.

“There are 870 federal judgeships, but only 13 — now 14 — are held by openly gay or lesbian judges,” Sharon McGowan, legal director of Lambda Legal, said in a statement. “Five federal circuits do not have a single openly LGBT judge.”

President Joe Biden, however, has appointed a diverse array of judges across the country. He has had 28 appeals and district court judges confirmed, which is more than any other modern U.S. president by this time in office, according to Huffpost.

In addition to racial and ethnic diversity, many of Biden’s appointees also come from progressive backgrounds as civil rights lawyers and public defenders.

“It’s no longer a bench … that is simply prosecutors, partners in large law firms,” said Senate Majority Chuck Schumer (D-NY), according to HuffPost, “but rather many, many others from walks of life with different and needed perspectives on the federal bench.”

And she'll be the very first openly lesbian judge to serve on any federal appellate court in the country!

Editor’s Note: Originally, the above quote from Sharon McGowan mistakenly stated there were now 13 federal judgeships held by out gay or lesbian judges, as well as four federal circuits without an out LGBTQ judge.

Robinson is actually the 14th out federal judge, and there are five federal circuits without an out LGBTQ judge. The quote has been updated to reflect these numbers.