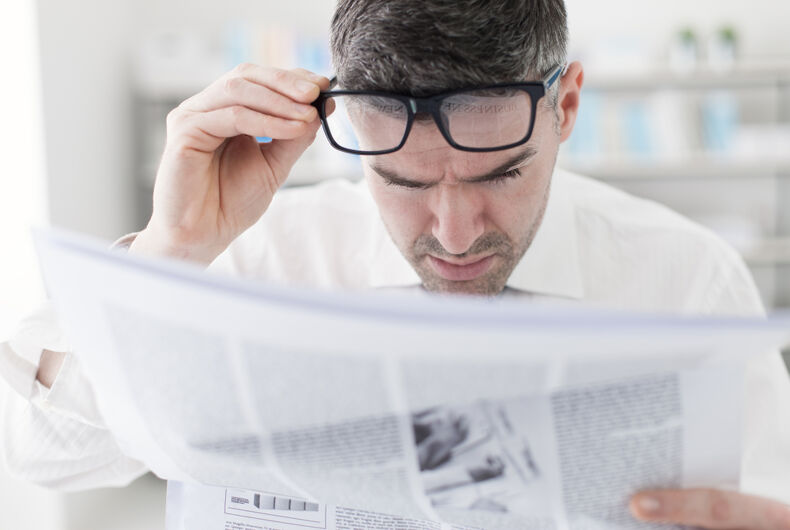 In the era when the daily newspaper served up an eclectic variety of content, from politics, business, crime, sports, recipes, and comic strips, the advice column quickly became one of the most popular features of most dailies. And while newspaper readership has continued to spiral downward in recent years, the popularity of asking an old “agony aunt” for advice hasn’t waned – it’s just moved to a new location, online.

For many millions of Americans, advice columns served the important dual function of providing advice to those seeking help and providing a stimulating, interesting peek into the lives of the people around us. They also often provided the first mention of homosexuals outside of newspaper police reports where gays were presented as a criminal threat, or in mid-century “security sweeps” of the federal government where the loyalty of gays was placed in doubt. The influence of advice columns could be wide and impactful, as more than 100 million readers regularly read one of the columns in their heyday.

Related: Halloween special sponsored by Twix has outraged conservatives howling like a banshee

Advice columnists of all types took up the subject of homosexuality as early as the 1920s and demonstrated positions that varied from empathy and compassion to damnation and scorn. Traditional lovelorn columnists and those offering psychological or social advice were among the first to step into the discussion, but many have followed, including astrologists, evangelical religious leaders, and even veterinarians. In all instances, advice columnists seemed to reflect – and sometimes lead – American attitudes toward their LGBTQ brethren.

Not only did the columnists themselves offer varying views on homosexuality, readers were not shy in offering their own viewpoints. As the topics and advice contained in the columns continued to evolve, readers could show disgust and approval.

One mother, writing to the venerable Ann Landers in 1974 declared, “I am wondering just how far the publisher will let you go before they decide to throw your column out of the newspaper. I am sick and tired of trying to beat my teenagers to the front porch to see if your column is fit for them to read. I refer specifically to some of the trash you have printed on homosexuality and venereal disease.”

Such views contrasted widely with a reader thanking “Ask Beth” impresario Elizabeth Winship as she retired from her column in 1998: “I grew up in a small town as a gay teen. Reading the letters in your column (in the 1980s) from other gay teens, along with your reassurance and frank and honest information, helped me realize that I was not some freak of nature, helped me through one more day, and I believe, may have saved my life.”

As author Diane Anderson-Marshall noted, the gay kid writing to “Ask Beth” represented “the voice of the coming (teen) age Gen Xer” and credited Winship with offering a forum where a gay person (or their parents) could ask a question without being portrayed as being “weird or stupid.”

Of course, it wasn’t always so. Newspapers and mass media, in general, were unfriendly territory for homosexuals for much of the 20th century. Many a gay man or lesbian woman scanned newspapers or books for the word “homosexual” in a sometimes-desperate search for community beyond their own closet. Police blotters provided the most regular place where a gay person could find mention of their kind, but only in the context of being a problem (even a criminal one) in search of a solution.

The only notable exceptions were occasional psychological or social discussions of the homosexual as “a deviate” where emphasis upon their differences from “the heterosexual norm” were highlighted, and the entire issue of gay or lesbian sexuality was confined to the perspective of a problem needing an answer.

Even when newspapers attempted to cover homosexuals as either victims or perpetrators of crime in a coy or shielded way with broadly worded news stories, they were subject to criticism. In his 1941 essay about the coverage of homosexual issues in newspapers, sociologist F.A. McHenry argued that newspapers should be more explicit in their coverage of homosexuality, particularly gay men as perpetrators and victims of crime, that a “clear attitude of mind toward the problem of homosexuality” was as necessary as previous media focus on the dangers of sexually transmitted diseases, such as syphilis.

From this examination of advice columns, we hopefully learn the expected framework of how Americans understood their homosexual compatriots, but also how attitudes and feelings toward them continued to evolve and expand. The advice columns effectively illustrate the journey of homosexuals from residing in a problem perspective to more sympathetic portrayals of lesbians and gays as legitimate members of the family and society.

Andrew E. Stoner, Ph.D., is a professor of Communication Studies at California State University, Sacramento. He is the author of a dozen non-fiction works, including the biography of openly gay journalist and author Randy Shilts. This piece is an excerpt from his new book, “Dear Abby, I’m Gay: Newspaper Advice Columnists and Homosexuality in America”