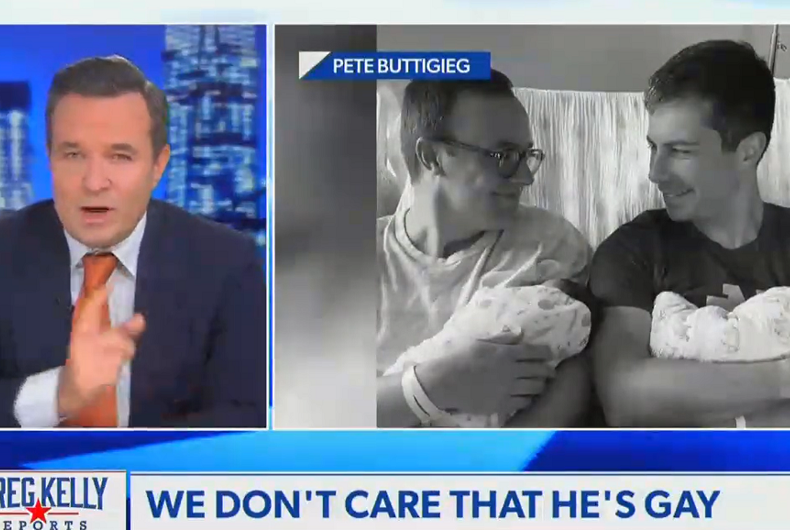 Greg Kelly stressed that he doesn't care that Pete Buttigieg is gay as he ranted about it.Photo: Screenshot

A far-right news host is accusing out Secretary of Transportation Pete Buttigieg of treating “being gay… like a full-time job” in an anti-gay rant.

Showing a picture of Pete and Chasten Buttigieg with their children, Newsmax host Greg Kelly said, “Why does he even have a Cabinet job? Why would a small-town mayor ever be taken seriously when he runs for president?”

“Quite frankly, it has to do with his orientation, his sexual orientation,” Kelly said. Buttigieg was the first out gay Democratic presidential candidate in history and no LGBTQ person has ever won a major party’s presidential primary.

Kelly showed some headlines about Buttigieg that mentioned his sexual orientation before saying, “They could not stop writing about this guy being gay!”

“You saw it in the movie, that he’s obviously participating in being gay- I mean it’s almost like a full-time job,” Kelly said, before adding “I could care less.”

To show how cool with the gays he is, Kelly said that the first “open, out of the closet, if you will, gay person in a presidential cabinet was Ric Grenell,” referring to Grenell’s three-month stint as acting Director of National Intelligence, a Cabinet-level position.

Grenell spends a lot of time telling people that he’s gay, but he has apparently not yet gotten a full-time position being gay.

i dunno, i was a freelance gay in high school but the benefits were so attractive i went full-time https://t.co/Ov3qG6QYcj

On Twitter, people mocked the idea of being gay as “a full-time job.”

it's true, i have no time for vacation with my wife and kids. https://t.co/LC5lwyrWsy

“To hell with that full time gay stuff. With Gay-er I can set my own schedule for when I’m gay and when I’m not” pic.twitter.com/UoR7Ae8yol

I am readily willing to admit that being gay is my full-time job. pic.twitter.com/K6abbQO4Bb

i dunno, i was a freelance gay in high school but the benefits were so attractive i went full-time https://t.co/Ov3qG6QYcj

Being gay's been my full-time job for decades, but I only recently switched from hourly to salaried.

The benefits are better, and I love getting my nights and weekends back.

But there are times when I miss the flexibility.

Being gay is a full time job because Taylor Swift keeps releasing and rereleasing albums and there are a lot of podcasts to listen to about them https://t.co/dxW0RTEvJa

if being queer is a full-time job, where tf is my check

Hetero is only a part-time gig for me.

Well he does kind of chew them up and spit them out whenever they are foolish enough to give him the opportunity.