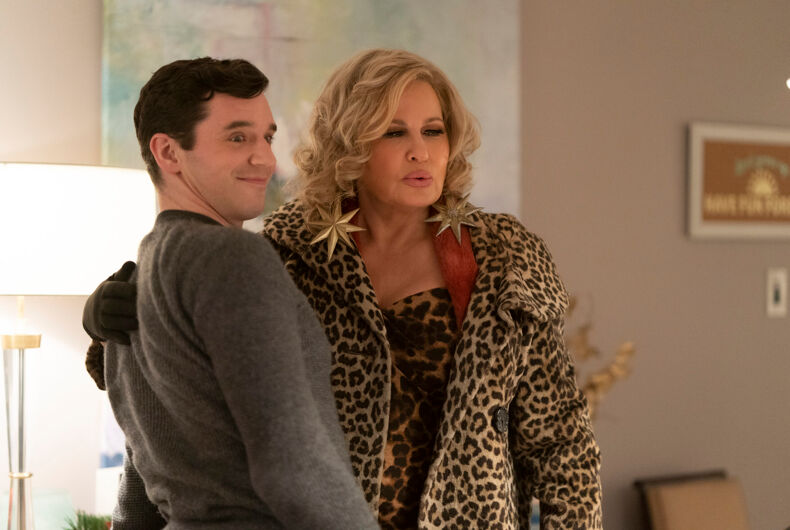 Netflix’s upcoming gay holiday rom-com is filled with stars and laughs, but icon Jennifer Coolidge will steal every scene if the new trailer released today is any indication.

Hallmark and Lifetime will also release LGBTQ-themed holiday movies this year after LGBTQ Nation called on the networks to create flicks that centered queer relationships and storylines and not solely cisgender heterosexuals.

Related: Don’t wait on Hallmark. Here are a few LGBTQ holiday films you can already watch.

Desperate to avoid his family’s judgment about his perpetual single status, Peter (Michael Urie) convinces his best friend Nick (Philemon Chambers) to join him for the holidays and pretend that they’re now in a relationship. But when Peter’s mother (Kathy Najimy) sets him up on a blind date with her handsome trainer James (Luke Macfarlane)— the plan goes awry.

“The formula you have, we all love and it will work just as well for a gay couple,” Daniel Villarreal wrote in his open letter to the makers of the perennial feel-good holiday shows. “So, Hallmark, Lifetime: How about a gay Christmas in 2020?”

Around the time we published the story, Hallmark’s parent company CEO responded to the charge that the channel’s “Countdown to Christmas” isn’t diverse enough. When questioned about whether a gay-led film could ever be put in the works, CEO Bill Abbott said that he was “open” to the possibility.

The idea enraged conservatives who called Hallmark “the next Chick-fil-A” and questioned how “family-friendly” the TV network is. One evangelist site called out “the homosexual mafia” for trying to get one movie with non-cisgender or straight main characters in it.

While the religious right was peeved that they’ll have to share Christmas with LGBTQ people, Urie and Chambers might have to deal with Coolidge horning in on their holiday plans.

As she says in the trailer, “The gays just know how to do stuff. And for some reason, they’re always obsessed with me.”

Tired of his family always asking why he’s single, Peter brings his BFF Nick home for the holidays, making everyone wonder if their connection is more than platonic.