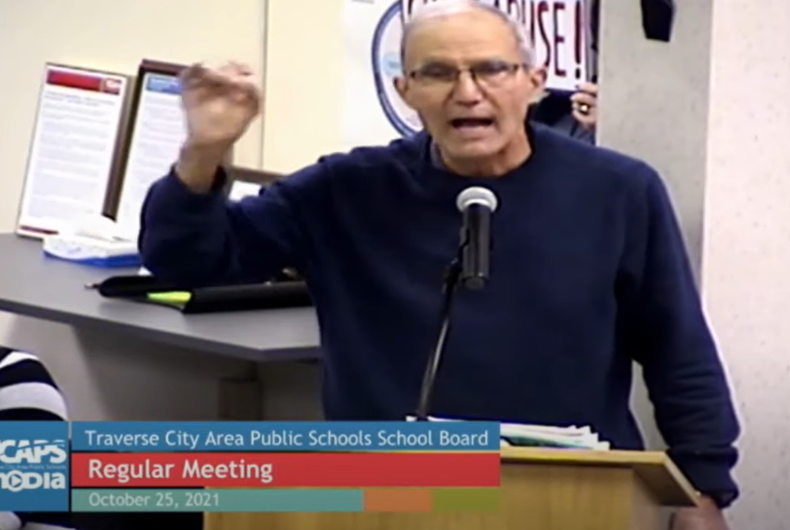 Bill, who is apparently like this every. single. meeting.Photo: Screenshot

A man in Chasten Buttigieg’s home town of Traverse City, Michigan went on a rant about “fecal matter” and “sodomy alliances” in schools at a school board meeting this week.

The Traverse City School Board considered – and passed – a mask mandate for students and staff at a meeting last Monday, but not before parents and other residents provided their own odd points of view on the matter, including one man named Bill who ranted about LGBTQ students.

He opened with, “The election was stolen from every American,” as someone near the recording apparatus sighs audibly.

“The whole coronavirus thing was manufactured to bring down the election,” Bill said, before bringing up that the school district is also debating an LGBTQ-inclusive measure.

The measure “shouldn’t be advertised on the computer, because it’s promoting a high-risk behavior,” he said. “It’s the riskiest behavior, according to the homosexual doctor, that there is sexually.”

He did not say who “the homosexual doctor” is.

“How can we be having gay-straight alliances here in the school?” Bill asked. “It should be called Sodomy Alliances, which is the most dangerous behavior.”

“Yes, you will come in contact with some fecal matter. You are entering a butthole. It is where poop comes out-” he said as a board member cut him off.

“Come on, come on!” the board member said. “Kids watch our board meetings!”

“So we can promote this behavior, you can promote sodomy, the most dangerous sexual behavior-”

“Did you come here just to be offensive?” the board member asked, cutting Bill off again. “What you’re saying is so inappropriate.”

“What you’re promoting it is so inappropriate!” he shot back. The same board member started to tell him that her kids watch the recordings of the meetings, before he protested again: “I say it should be discouraged in schools!”

After some discussion among the board members, the frustrated member said, “I apologize. It’s every single meeting of inappropriateness.”

“Every day of the year you’re promoting homosexuality to the kids!” Bill shouted back. “We can bring up about the rainbow, the pretty rainbow, we can talk about ‘gay,’ but we can’t explain what sodomy is about, what happens when the act occurs, that it gets dirty.”

Another person at that meeting compared mask mandates to the Holocaust, said that masks and vaccines don’t work, and called the mask mandate part of “Satan’s agenda.”

“I’m just wondering if we’re attending a clown show,” the woman said. “You know how ridiculous you guys look with all these masks on? Satanic, OK?”

Woman at Traverse City Sch Bd meeting this week: “Satan’s agenda is behind this. Masks don’t work and neither do vaccines. It’s destroying and killing. You want to program children to turn in their parents. Right now, there are classrooms in the US that are teaching cannibalism.” pic.twitter.com/ZBZJwCvCKk

School board meetings across the country have been inundated this year with parents and other people protesting against mask mandates, teaching about diversity and racism, and equality for transgender students. The National School Boards Association has requested federal assistance in dealing with the threats of violence – including death threats – coming from these protestors.