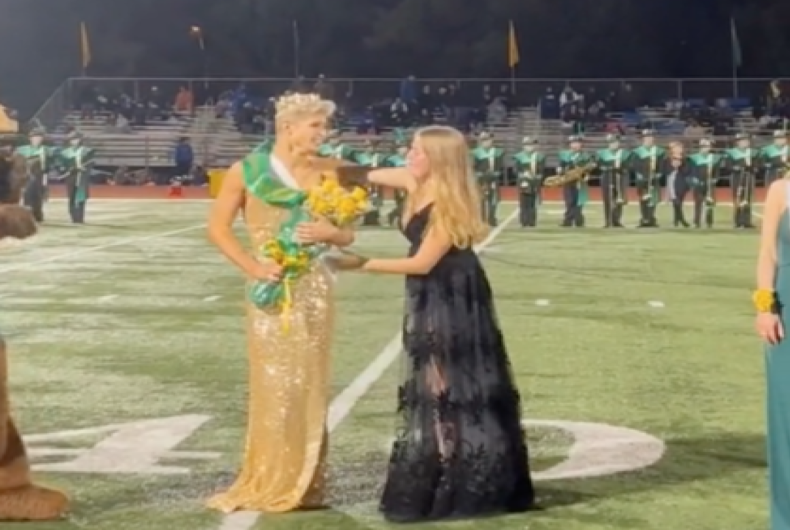 Zachary Willmore, a senior at Rock Bridge High School in Columbia, Missouri made quite the splash when he was crowned Homecoming Queen. His victory was celebrated by the media, his fellow students, and LGBTQ people, but the usual suspects quickly started insulting the teen.

But Willmore, who has over a million followers on TikTok, wasn’t willing to take the abuse and shot back with a video that spelled it out plainly for his haters.

Willmore asked his followers whether he should run for Homecoming King or Queen and when they chose Queen, he entered the popularity contest. And won.

“They thought Queen would look prettier on the sash,” Willmore said. “I was like, ‘You’re so correct.’ So I chose Queen.”

He has repeatedly challenged the school district’s dress code, condemning teachers’ attempts to make him conform to more masculine clothing.

“Teachers were allowed to make the call of what was appropriate,” Willmore told local news. “Many times I did feel like they could target students, and I did feel targeted in some scenarios.”

Columbia Public Schools spokesperson Michelle Baumstark gave the student kudos for his outspokenness though, saying he “has challenged the dress code over his time at Rock Bridge and is working with the school to develop a more up-to-date dress code.”

“A group of students has been assembled to work on the dress code revisions with administration,” Baumstark said. “They are still at the beginning stages, but Rock Bridge hopes to have a revised dress code by the end of the school year and before Zachary graduates.”

And when online trolls started insulting the popular and persistent senior after video of his win swept the internet (with over 3.5 million views), he wasn’t about to back down from the challenge.

Using a comment from the TikTok user “floridian_republican” as his jumping off point, Willmore looks at the camera and says, “Before I start this video, let me just put on my crown that I won fair and square because Homecoming is quite literally a popularity contest.”

The comment appears behind him as he speaks. It reads, “Taking a girl’s dream away, lovely.” The user has since made their account private.

“A lot of you guys’ main points in the video of me winning was that I was stealing some little girl’s dream,” he continued. “It was some little boy’s dream too and that little boy was me. You guys are hiding your hatred and homophobia in a thick layer of fake empathy.”

“People were happy for me. You guys weren’t because of your fixed mindset.”

“Why did I decide to wear a dress?” he continued. “I feel pretty in a dress. Gold is my color.”

“For all the haters on my page, thank you guys so much for boosting my video. Because of you guys I have an interview with NBC. I love it. Love it. See you on TV!”

Reply to @floridian_republican sorry I couldn’t post for a week but I’m back!💕 #gay #viral #lgbt #trending #xyzbca