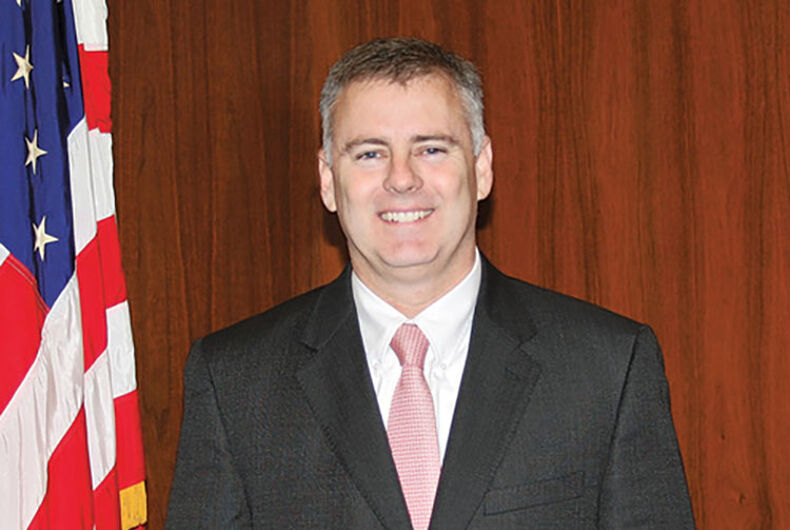 A federal judge in Texas has just ruled that businesses that say they’re religious and churches can fire LGBTQ people, chipping away at the protections granted by the Supreme Court’s decision in Bostock v. Clayton Co. last year.

The case was brought by long-time anti-LGBTQ activist Stephen Hotze’s management firm, Braidwood Management Inc., which he said was a “Christian” management firm.

Hotze “does not allow Braidwood to hire or employ individuals who are known to engage in sexually immoral behavior or gender non-conforming conduct of any sort, including homosexuality, cross-dressing, and transgenderism,” his lawsuit said.

Braidwood sued the Equal Employment Opportunities Commission (EEOC) for enforcing Bostock, where the Supreme Court ruled that Title VII’s ban on job discrimination “because of sex” also bans anti-LGBTQ discrimination because it’s impossible to discriminate against LGBTQ people without taking sex into account.

Braidwood said that Bostock violates its “sincere and deeply held religious beliefs,” even though it’s a management firm and not a religious organization. Hotze’s church, the Bear Creek Bible Church, was also a plaintiff in the lawsuit.

Hotze and Braidwood filed their lawsuit in the right court because they got anti-LGBTQ extremist Reed O’Connor as their judge. And O’Connor ruled in their favor.

O’Connor granted Braidwood a summary judgment in its favor, saying that the Religious Freedom and Restoration Act (RFRA) and the First Amendment both require the government to provide a religious exemption to anti-discrimination law. He said that requiring a Christian business like Braidwood to hire LGBTQ people would be a substantial burden on the business’s ability to practice its religion and that there is no compelling government interest in requiring Braidwood to do so, rejecting the EEOC’s argument that eliminating workplace discrimination is a good reason to have laws like Title VII.

He also ruled that any business is allowed “to regulate the sexual conduct of their employees… including sodomy, premarital sex, adultery, and any other kind of sexual activity that occurs outside the context of a marriage between a man and a woman,” as long as such a policy “applies evenly to heterosexual and homosexual sexual activity.” He did not explain how requiring employees to marry someone of the opposite sex applies evenly to LGBTQ and straight people.

Last, O’Connor ruled that all employers can set dress codes and restroom usage according to sex assigned at birth instead of gender, even though one of the plaintiffs in Bostock was transgender and this issue was brought up in that case.

The judge also said that the only way to determine if a business qualifies for a religious exemption is if their “asserted religious belief” seems like “an honest conviction.”

O’Connor, who was appointed by George W. Bush, ruled earlier this year that a Catholic hospital doesn’t have to follow federal anti-discrimination laws when it comes to the provision of health care because of the chance that they’d be forced to provide care for a transgender person that affirms their gender, even if the procedure is not one the hospital objects to. His reasoning for the sweeping religious exemption for the Catholic hospital was that President Joe Biden and Barack Obama have a “pattern” of religious animus so they can’t be trusted to enforce the law correctly.

In 2015, O’Connor blocked federal benefits for workers married to spouses of the same sex. The federal government approved the benefits and directed states and other employers to implement them. O’Connor ruled that, since marriage equality was banned in Texas at the time, it would be illegal for LGBTQ workers living in Texas to access them.

Hotze has made the news in the past for his anti-LGBTQ extremism. In 2015, he went on a speaking tour in Texas to denounce “homofascists.”

“Homofascists were enabled and appeased by those who treated their behavior as normal or acceptable,” he said at the time. “The indoctrination started in public schools, by design. Remember: Homosexuals can’t reproduce. They have to recruit.”

Hotze – who once said that Supreme Court justices “want to let sodomites queer our country” – runs a PAC, Conservative Republicans of Texas, that sued in 2013 to get the city of Houston to stop offering marriage benefits to same-sex couples.

His PAC argued that he and the other plaintiffs “suffered a ‘particularized injury’ because they are devout Christians who have been compelled by the mayor’s unlawful edict to subsidize homosexual relationships that they regard as immoral and sinful, in violation of their sincere religions beliefs.”

In 2016, his extreme anti-gay rhetoric got the Conservative Republicans of Texas labeled a hate group by the Southern Poverty Law Center.