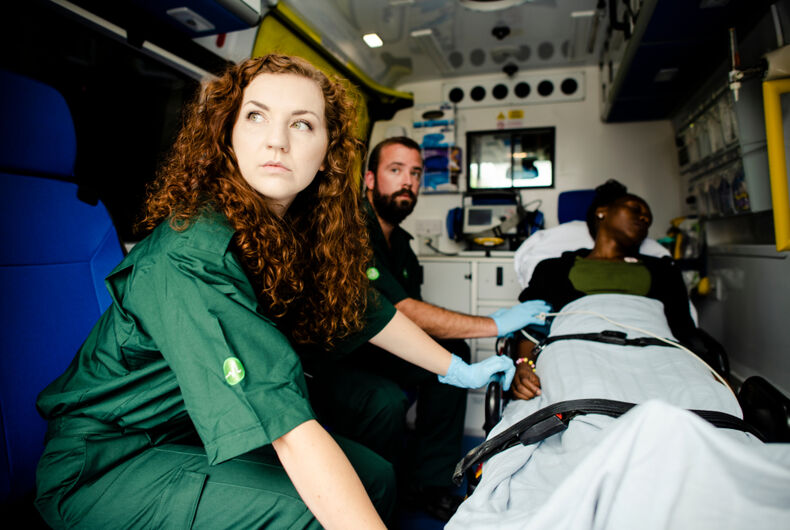 A federal judge just ruled that a Catholic hospital network can’t be forced to comply with the entire section of the Affordable Care Act (ACA, or Obamacare) that bans health care providers from discriminating based on sex – including against LGBTQ people. He said that the ban on sex-based discrimination could force religious doctors to perform abortions and “gender transition procedures.”

George W. Bush appointee District Judge Reed O’Connor in Texas ruled that Obamacare “forces Christian plaintiffs to face civil penalties or to perform gender-transition procedures and abortions contrary to their religious beliefs,” which he called ” a quintessential irreparable injury” even though no hospital was actually forced to perform the procedures.

The Obama administration interpreted Section 1557 of the ACA, which bans sex-based discrimination, to ban anti-LGBTQ discrimination by health care providers that receive federal funds because it’s impossible to discriminate against an LGBTQ person without taking their sex into account. The same reasoning has been used by federal courts, including the Supreme Court in Bostock v. Clayton Co.

The Franciscan Alliance, a Catholic network of hospitals, sued saying that their rights under the Religious Freedom Restoration Act (RFRA) were violated since they would be forced to perform abortions and provide gender-affirming care. No one had ever filed a complaint against the Franciscan Alliance accusing them of discrimination, but their lawsuit claimed that their rights were violated by the mere possibility that it could happen one day.

After years of working its way around the legal system, O’Connor ruled in Franciscan Alliance v. Burwell that Section 1557 can’t be enforced against the Franciscan Alliance at all, even though their lawsuit was just about how the Obama and Biden administrations interpreted the section.

O’Connor issued the permanent injunction blocking the entire provision and argued that if both the Biden and Obama administrations interpreted it the same way then that represents a “pattern.”

“To ignore this pattern would be to face the Neuralyzer,” O’Connor wrote in his unusually informal and eccentric opinion.

O’Connor also said that the Biden administration “may” have “some sort of religious animus in the failure to include reasonable religious exemptions” in its interpretation of Section 1557, although he didn’t point to any evidence that the Catholic president has it out for Catholic health care providers.

If the decision stands, the Franciscan Alliance can discriminate against anyone on the basis of sex if they say that their religious beliefs require them to do so. In a statement, they promised not to use their new religious exemption to turn away LGBTQ patients

He repeated the argument that the lawsuit was about the threat of facing “multimillion dollar penalties by a controversial HHS regulation if they refused to perform gender-transition procedures,” even though the decision went beyond the HHS interpretation and blocked Section 1557 itself.

Moreover, he didn’t explain why a transgender person would seek a surgeon who doesn’t perform gender-affirming procedures in the first place – or how it would be discrimination to just not specialize in those procedures – which could mean that his clients are actually worried that transgender people would ask them to perform procedures that they perform for cisgender people but just don’t want to perform if the patient is transgender.

The ACLU said that the lawsuit could lead to hospitals and health care providers “screening patients based on religious doctrine and turning away transgender patients seeking necessary gender-confirming care or reproductive health care.”

“This lawsuit aims to undermine critical protections against discrimination in health care,” said Louise Melling of the ACLU. “No one — whether they’re male or female, transgender or not — should fear being turned away at the hospital door because of who they are.”