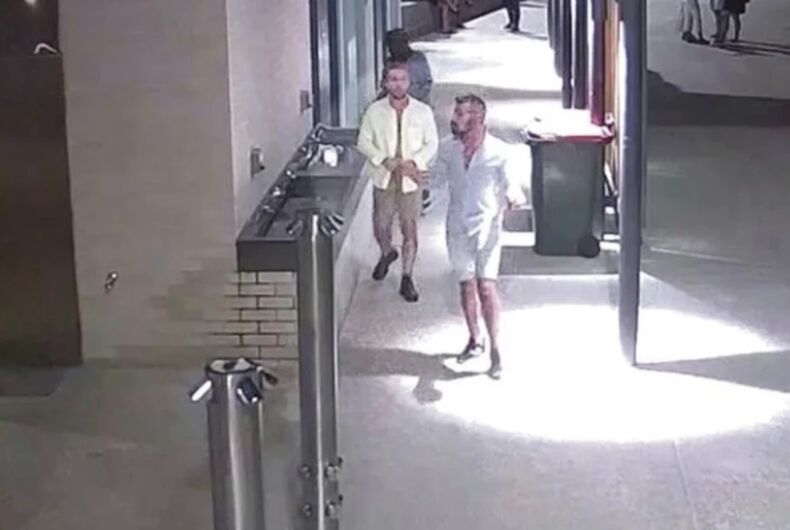 The men leave the restroom after allegedly raping the victim, buttoning up their clothes.Photo: WA Police

Two straight men are accused of pretending to be a gay couple in order to lure a woman into the restroom with them to sexually assault her.

Restaurant owner Alberto Nicoletti, 29, is facing 10 charges related to allegedly assaulting six women over the course of five years, including one woman who authorities say he raped with his friend Vincenzo Mineo, 36, who both appeared in court in Perth, Australia earlier today.

The victim told police that she befriended the men at The Lookout bar in the suburb of Scarborough and that they led her to believe that they were a couple. They then invited her to take cocaine in a public restroom on the beach.

She went with them and they allegedly raped her. Security footage shows the two men leaving the restroom before the victim was found inside.

According to WA Today, police believe that the men went to a different bar in the area and raped two other women separately later that night.

Western Australia Police released images from the security footage last month and were then able to identify and arrest Nicoletti. Police tied Nicoletti to several other sexual assaults, including one from 2016 where the alleged victim dropped her complaint because “it was too much to deal with.”

Several other alleged victims were found, including one last year who said Nicoletti pretended to be an Uber driver in order to lure her into his car outside a nightclub and another who said he grabbed her off the sidewalk where she had fallen over.

The prosecutor said that Nicoletti targeted women in their 20’s who were drunk.

“It must have been a terrifying experience for that young lady. It was an opportunistic, pre-planned objective by him, to hang around nightclubs in the early hours of the morning, preying on vulnerable females — that is what those alleged facts give a sense of,” the prosecutor said.

Nicoletti’s lawyer said that his client called one of the victims the next day after she gave him her number, which to the lawyer meant that he had not “done something nefarious.”

His lawyer said that he friended the victim from the beach bathroom the next day on a social media network, which the lawyer said was “not the conduct of someone with a guilty conscience.”

Nicoletti applied for release, his lawyer arguing that he has been “subjected to abuse on social media” after the security footage was made public so it’s unlikely that he’ll even leave his home, much less attack anyone else. The lawyer said that Nicoletti employs 11 people at his restaurant and he needs to run his business and care for his father who has health problems.

He was denied bail after police said that he is “a dangerous predator” who is likely to assault more women.

The prosecutor said that several investigations into alleged assaults connected to Nicoletti are still ongoing and that he may face more charges.