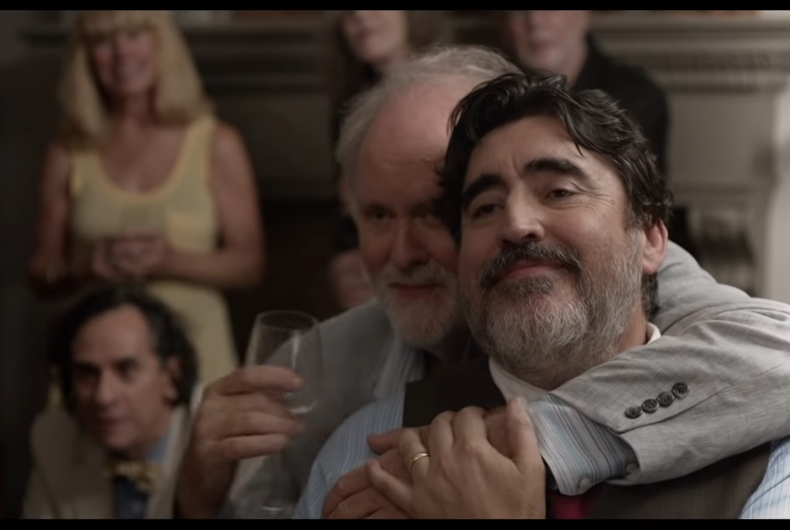 For so long, we have witnessed the gay characters getting killed off on screen. We’re so used to them dying young of illness, taking their own lives consumed by shame, or being beaten to death for who they are. But you can grow old as an LGBTQ person, and it’s vital that is shown in media – both to reflect the real world and to show queer and trans youth that it gets better.

Let’s celebrate some of the best elderly LGBTQ representation in TV and film.

“Amid shifting times, a former baseball player keeps her lesbian relationship a secret from her family for seven decades.”

Professional baseball player Terry Donahue and her partner Pat Henschel ran a successful interior decorating business together, all while hiding their love from those around them. This Netflix documentary tells their 65-year journey of love, after falling for one another in 1947. They describe how they overcame generations of prejudice to be together and it’s sure to pull on your heartstrings. This real-life love story is so moving and not only shows that queer love can stand the test of time, but that such happiness can come from breaking the rules.

“For as long as they can recall, Grace and Frankie have been rivals. Their one-upmanship comes crashing to a halt, however, when they learn that their husbands have fallen in love with each other and want to get married. As everything around the ladies is coming apart, the only thing they can really rely on is each other.”

This comedy spans seven seasons and focuses both on gay romance and friendship between two women in their 70s. We get to witness such vibrant chemistry between two elderly gentlemen alongside goofy jokes. It depicts intimacy and companionship between seniors – both gay and straight – in groundbreaking ways, and it’s just a delight from beginning to end.

“When Yorkie and Kelly visit San Junipero, a fun-loving beach town full of surf, sun and sex, their lives are changed.”

This famous Black Mirror episode begins in 1987, where Yorkie and Kelly hook up at a bar and embark on a whirlwind romance. They exist, however, in a simulated reality where the dead can live and the elderly can visit temporarily, inhabiting the bodies of their younger selves in a chosen time period. Without dishing out spoilers, this episode doesn’t depict elderly queer love in the most typical of ways. What it does do, however, is tell a beautiful story of lesbian romance that completely transcends time and every ounce of logic we know regarding the universe. It is heartfelt and so memorable – as well as full of good music.

“Kevin, Kate and Randall, three siblings, go through unique personal struggles at different intervals of life as they try to find happiness and get over a tragedy in their past.”

This drama series tells several poignant LGBTQ stories with such progressive and refreshing storytelling. The senior representation, however, comes in the form of William Hill, who gives us a rare depiction of an elderly, bisexual, black man. His character makes an impact from the get-go, with the show addressing his sexuality in a realistic yet sensitive, compassionate way. His character is truly a breath of fresh air and it is clear he’s been crafted with such care to deliberately avoid harmful stereotypes. His sexuality isn’t what makes his character – it is merely one part of his identity – it is simply accepted, particularly by William himself, a man who grew up when being openly LGBTQ was met with great resistance.

“A newcomer to the community retirement centre, Margaret, creates an upheaval in the lives of three friends, Hank, Charlie and Sidney.”

How often do you get to see gay characters in a retirement home? This series depicts the comedic situations the group get entangled in as they navigate life in the home they now live in – which isn’t liked by all. It’s wild (literally, they steal cars, commit credit card fraud and throw a wild party – and that’s just the pilot episode), and Sid Delacroix is openly gay and perfectly content with exactly who he is through it all.

“After Ben and George get married, George is fired from his teaching post, forcing them to stay with friends separately while they sell their place and look for cheaper housing – a situation that weighs heavily on all involved.”

This romance-drama movie is simply gorgeous with impeccable acting. To see two men spend 40 years in a relationship, then decide to marry, shouldn’t be unusual. But, while it is, we should welcome it with open arms. This project is everything from sweet to sad, but it does a wonderful job of exploring both intimacies and just exactly how much of our identity is invested in coupledom – especially in a long-term partnership.

Sam and Tusker are traveling across England in their old RV to visit friends, family and places from their past. Since Tusker was diagnosed with dementia two years ago, their time together is the most important thing they have.

Get your tissues ready for this weepy romance movie. It may sound strange, or silly, but a gay man living to the typical age of dementia, and experiencing all the emotional and psychological effects of that condition, is seldom seen in TV or film. It’s a completely human process and part of growing old, but it just never gets airtime. Yet in this tearjerker, we witness the impact of dementia on both people in a long-established same-sex relationship. The on-screen chemistry is so moving and the storytelling is beyond powerful, showing the men wrestling with their consciences and responsibilities as they make one final campervan trip together.

“Two closeted gay men in their twilight years contemplate a possible future together after unexpectedly falling in love.”

This Chinese romance-drama follows a 70-year-old married taxi driver who refuses to retire, who meets a 65-year-old retired single father. Despite keeping their sexuality a secret, they are proud of the lives they have created and the hardships they’ve overcome. They share a brief encounter, but their initial meeting ignites something inside them both that had been suppressed for so long. They recount their personal stories and begin to contemplate a future together.

Life
A Secret Love, Black Mirror, Grace and Frankie, Love Is Strange, Supernova, The Cool Kids, This Is Us, Twilight's Kiss