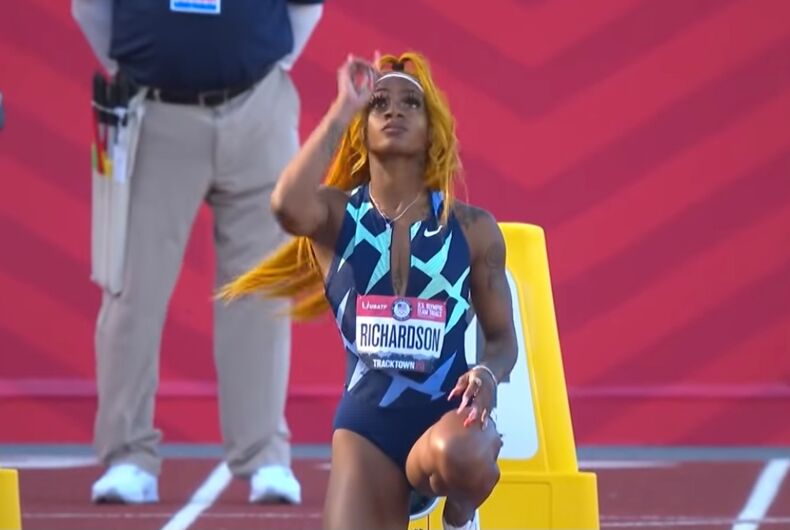 As bills banning transgender students from participating in school sports were passed in states around the country, LGBTQ visibility in athletics is more important than ever.

This year, professional athletes came out in droves, speaking up for their community and speaking out for causes they believed in. Many who were already out also continued to advocate for LGBTQ equality. Beyond that, many of them simply dominated in their respective sports.

Related: 9 quotes from LGBTQ celebrities that will comfort you as you’re coming out

Here are seven out athletes we’re thankful for this year. 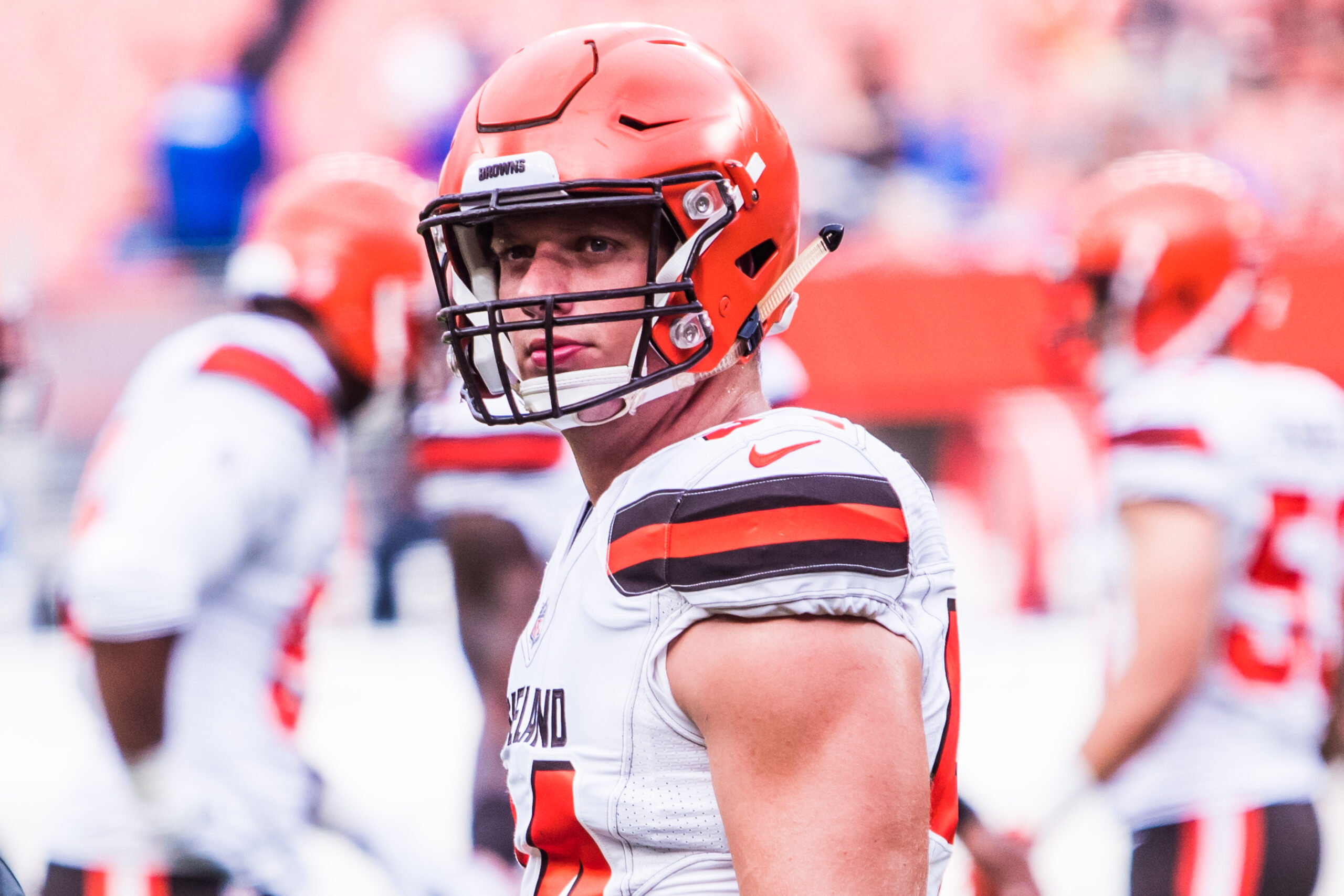 Carl Nassib made sports history when he came out as gay in a June 21 Instagram post, making him the first active NFL player to do so.

In his post, Nassib included a video and several screenshots of notes from his phone, explaining his decision to share the news now.

He then became the first out NFL player to get a spot on a team’s NFL roster, and then the first out player to compete in a regular season game. During that game, the defensive end also made one of the most vital plays of the night, helping to seal a victory for his team on top of making history.

In a league that has long been known for its homophobia, Nassib’s bravery will no doubt make a big difference.

Kumi Yokoyama, a professional soccer player who has played in Japan, Germany, and the United States, came out as a transgender man this summer.

The 27-year-old, who is currently playing for the Washington Spirit in the pro soccer league NWSL, revealed that they had been transitioning for years and had already received gender-affirming care, but felt the need to stay closeted while playing in Japan.

Yokoyama revealed the news in an interview with their former teammate, Yūki Nagasato, released on YouTube.

“When my girlfriend said there was no reason for me to stay closeted, it really hit me,” they said. “Coming out wasn’t something I was enthusiastic about, but if I think about my life going forward, it would be harder to live closeted, so I found the courage to come out.”

Yokoyama was hailed as one of the most high-profile Japanese athletes to come out, which is especially significant for  a country that struggles with acceptance of LGBTQ people.

“More people in Japan are becoming familiar with the acronym LGBTQ and it’s seen more [in the media],” Yokoyuma said, “but I thought if influential people like myself don’t come out and use their voices, [awareness and acceptance] won’t grow.” 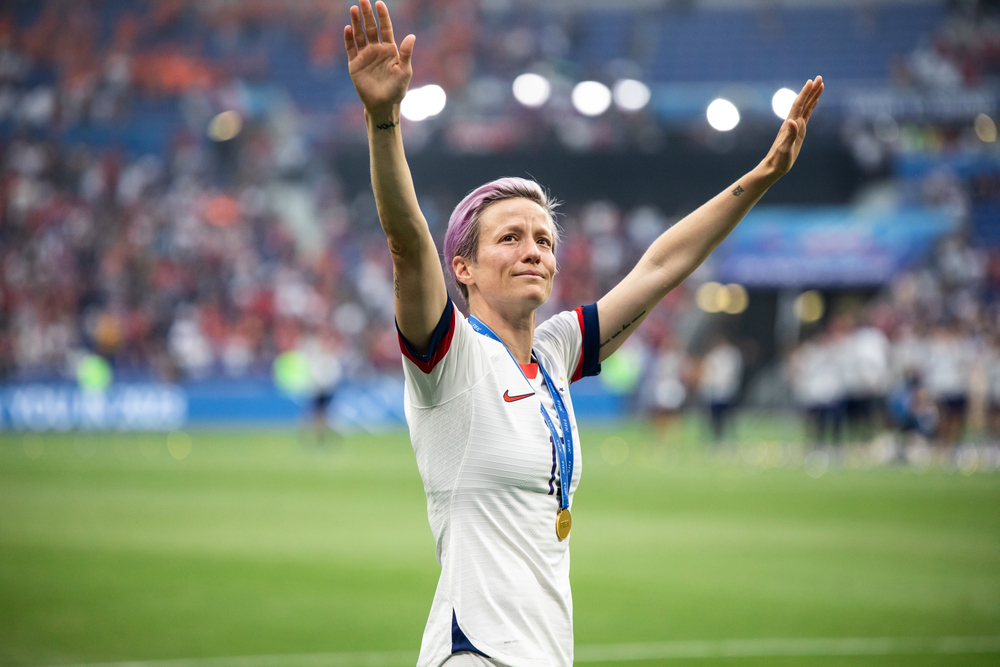 This year, out soccer Megan Rapinoe continued to use her influence to stand up for what she believes in. In March, Rapinoe testified before Congress about gender pay inequality and how even world-famous athletes still experience it.

Rapinoe led the U.S. Women’s National Soccer Team to victory at the Women’s World Cup in 2019, but she said told the House Oversight and Reform Committee that success on the field didn’t translate into equal pay.

“The U.S. Soccer Federation has continually lobbied against our efforts,” Rapinoe said. “And if it can happen us and it can happen to me – with the brightest light shining on us at all times – it can and it does happen to every person that is marginalized by gender.” 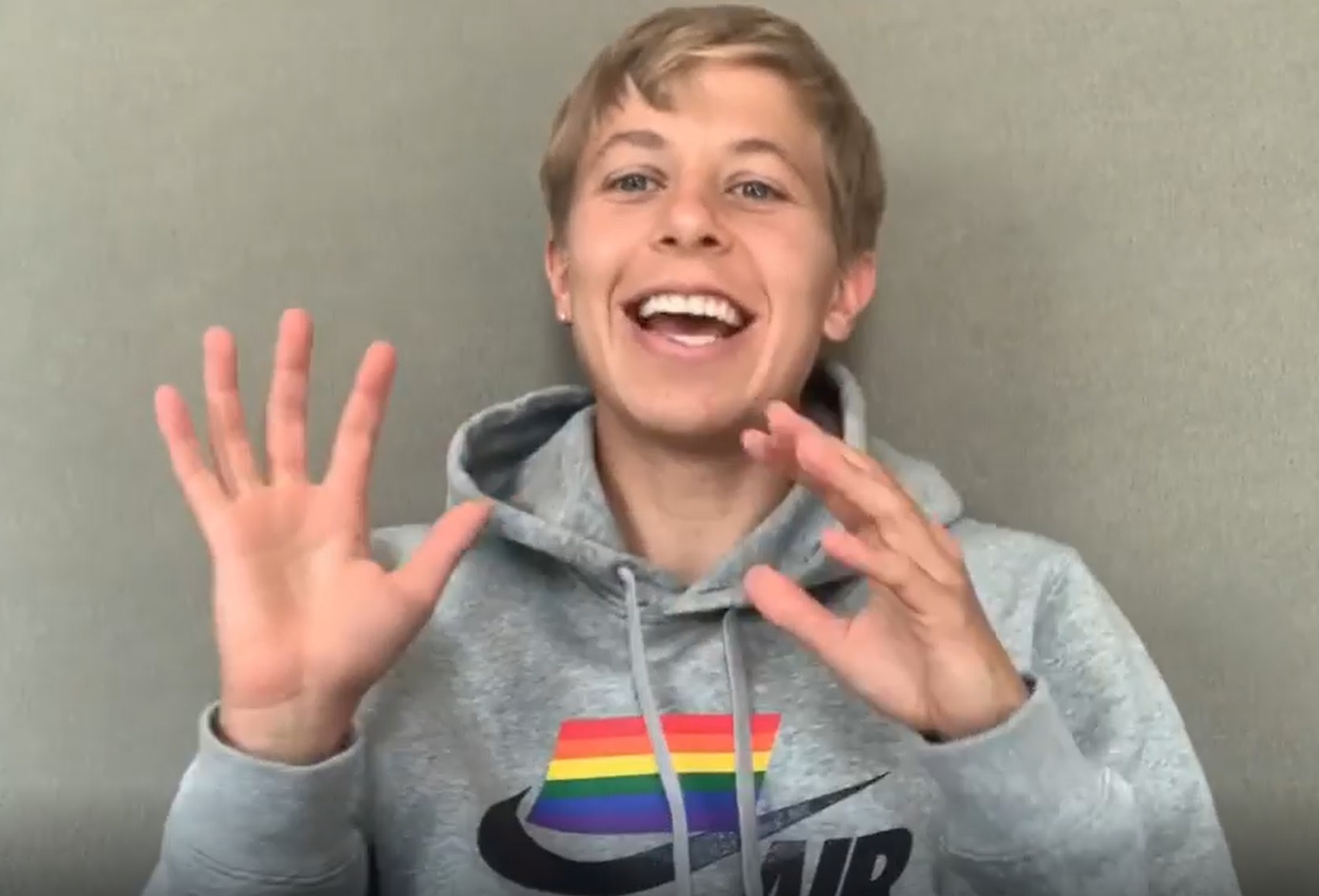 Soccer player Quinn, a member of team Canada, became the first out transgender athlete, and the first non-binary athlete, to win a gold medal at an Olympic Games. Quinn played in over 300 of the team’s 600 minutes of competition, both as a midfielder and forward.

A soccer star for the Canadian women’s national team, Quinn came out as transgender in September. On July 21, before the Opening Ceremony even commenced, they became the first openly trans athlete to participate in Olympic competition.

Quinn has also used their platform to speak out for trans rights.

After competing in the team’s opening match, Quinn posted to Instagram that they “don’t know how to feel.”

“I feel optimistic for change,” they said. “Change in legislature. Changes in rules, structures, and mindsets. Mostly, I feel aware of the realities. Trans girls being banned from sports. Trans women facing discrimination and bias while trying to pursue their Olympic dreams. The fight isn’t close to over… and I’ll celebrate when we’re all here.” 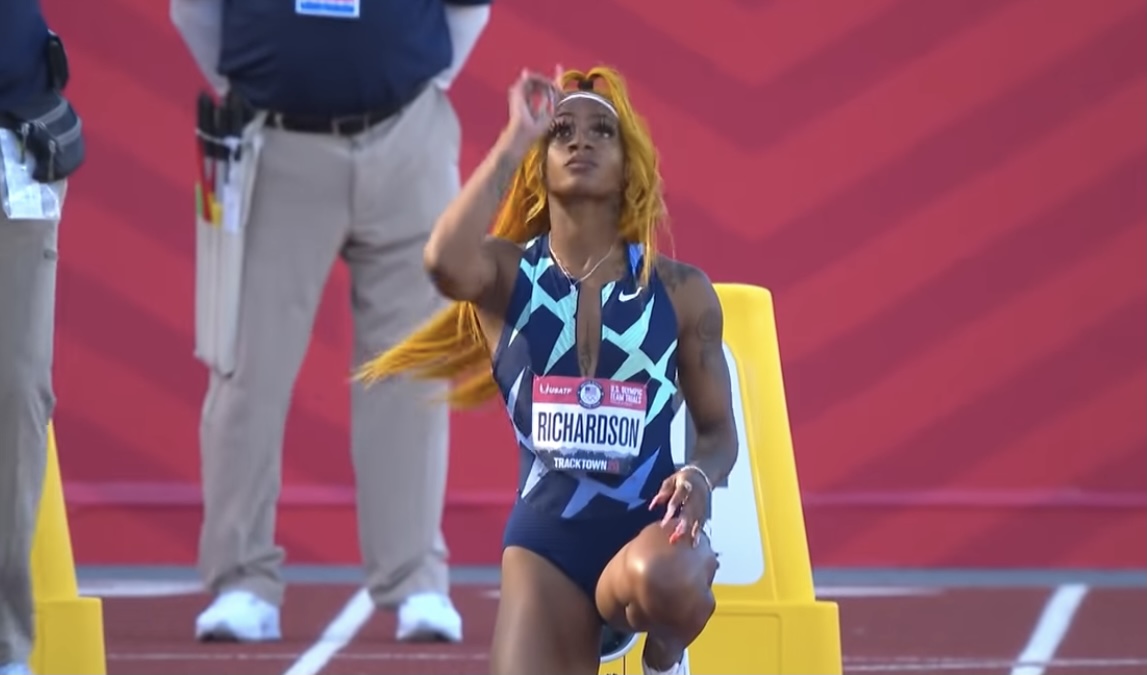 Out track and field athlete Sha’Carri Richardson wasn’t able to participate in the Olympics after marijuana was found in her system, but that didn’t stop her from capturing America’s hearts during the Olympic trials.

At 21 years old, Richardson won the 100-meter dash with incredible speed, all while sporting bright orange hair that shot out behind her like a flame while she ran.

Richardson completed the 100-meter dash in a stunning 10.86 seconds on June 19 at the trials in Eugene, Oregon.

After testing positive for marijuana, Richardson said she had smoked to deal with the recent death of her mother. Fans across the country rallied to support her. Over half a million people signed a petition to convince the Olympics to let her run.

Nevertheless, Richardson was banned from participating this year–based on what many argued are unfair, outdated, and racist policies–but something tells us we have not seen the last of Richardson.

This year, Robyn Lambird became one of the first openly trans or non-binary athletes to earn a medal at the Paralympics. Lambird won a bronze medal in the women’s 100-meter T34 wheelchair sprint on August 29.

Lambird, who is 24, became just the second trans and non-binary person to medal in either Olympic or Paralympic history, which was only seconds behind two record-breaking performances.

“I’ve been really training hard for the past six years, so to end up on the podium really would really be a dream come true,” Lambird said in an interview before their victory.

They made those dreams come true with a time of 18.68 seconds in the race.

Lambird has lived with cerebral palsy since they were nine. Outside of racing, they are also a model and disability rights advocate.

The Out Athletes of the U.S. Women’s Basketball Team 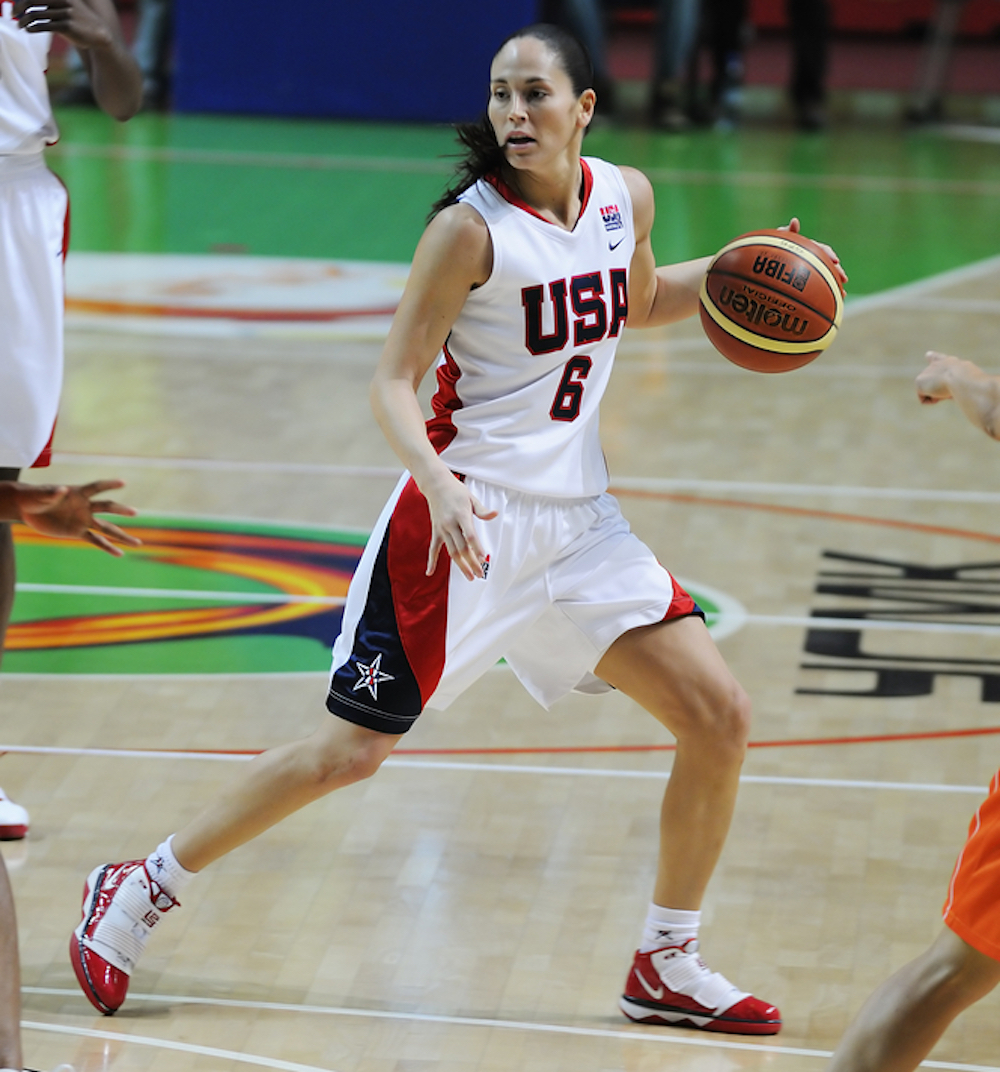 At this year’s Olympics in Tokyo, the U.S. Women’s national basketball team won yet another gold medal, their seventh straight in Olympic competition since 2000. With six out players and at least one out assistant coach, the team brought LGBTQ representation to a global stage.

With the victory, Sue Bird — who is engaged to Megan Rapinoe — has earned more gold medals than any other Olympic basketball player, alongside Diana Taurasi.

The other out players on the team also shined in the gold medal game. Breanna Stewart had 14 points, 14 rebounds, 5 assists, 4 steals and 3 blocked shots. Taurasi had seven points, eight assists, and eight rebounds, and Chelsea Gray had six points and four assists.

A’ja Wilson had 19 points and 5 blocks in a game held on her 25th birthday.