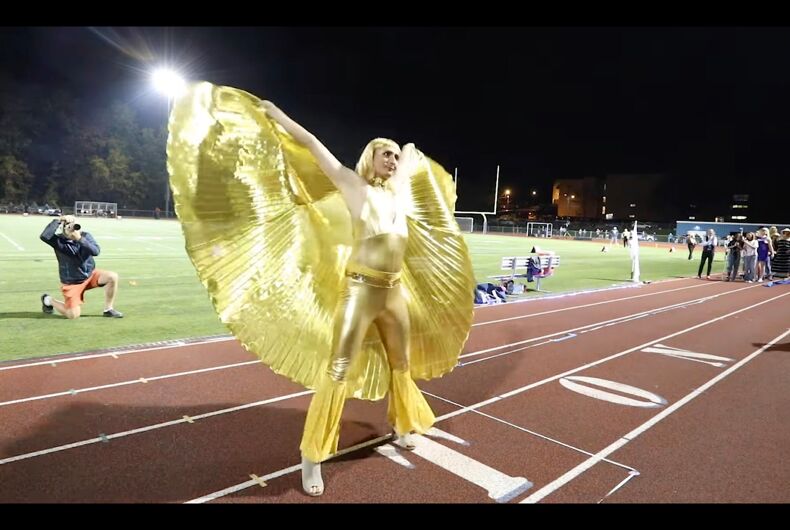 The crowd went wild at a Vermont high school homecoming football game as the halftime show transformed the field into a fabulous drag ball.

Both faculty and students from Burlington High School strutted across the field as drag queens and kings. They wore colorful wigs, sparkly ensembles, feather boas, knee-high boots, and more.

Meanwhile, those packed into the stands for the highly anticipated event were dressed head to toe in rainbow and waved Pride flags as they excitedly chanted, “Drag Ball.”

Each of the approximately 30 performers had their moment to spin and twirl for the crowd. The group also performed a lip sync to “Rainbow Reign” by Todrick Hall.

Those involved were touched by the support they received from the community.

“Things went amazing,” Ezra Totten, student leader of the Gender-Sexuality Alliance, told The Associated Press. “The stands were completely packed. … It was just so heartwarming to see.”

The drag ball was the brainchild of English teacher Andrew LeValley, an adviser to the Gender-Sexuality Alliance.

“I was just really hoping to give our students — who are both out and the students that were in the stands who are not out — a moment to shine and feel loved, and know that there is a place for them in public schools,” LeValley said.

LeValley felt it was important to hold the event at a football game to send the message that everyone should be welcome in all types of spaces.

“We have to assume that there are LGBTQ folks everywhere, which include[s] really masculine spaces,” LeValley told local Vermont publication Seven Days. “Why does this space have to be one way or the other? It can be both, and there’s beauty and benefits in having it be both.”

Adalee Leddy, a student at Burlington High School who attended the game, told Seven Days the show was “absolutely amazing.”

Totten added that now that they have seen the joy it brought, the group hopes the drag ball will happen annually.

“It shows the Burlington community is there for each other,” Totten said.