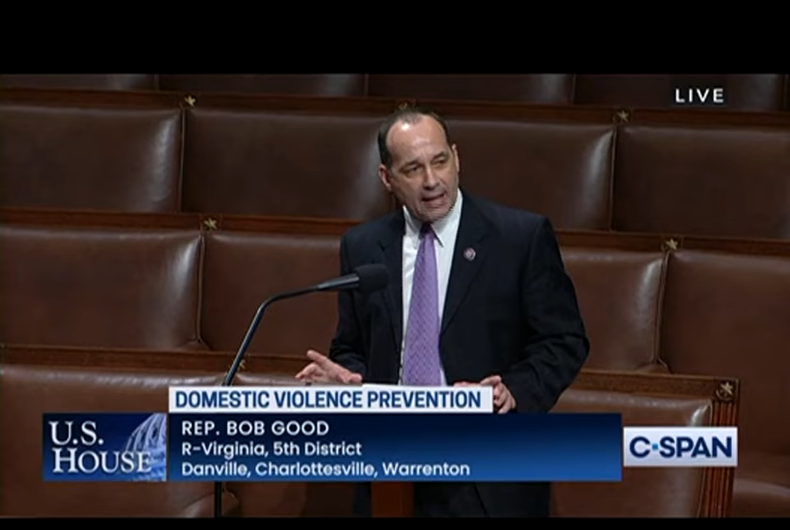 Rep. Bob Good (R-VA) made a stunningly bigoted speech on the House floor yesterday to defend his decision to vote against domestic violence protections.

“Nearly everything that plagues our society can be attributed to a failure to follow God’s law and his rules for and definition of marriage and family,” Good asserted before making sure everyone knew he meant transgender people and same-sex marriage.

Good insisted the bill would require churches to espouse LGBTQ rights, shut down religious charities, and “devastate” families. Democrats’ priority, he thundered, is to “force our faith-based providers out of business, redefine sex, and to change the identification of gender.”

“My colleagues on the other side claim they want to protect the family,” he continued, “but instead, they’ve chosen to attack the very bedrock of country, the moral principles, and the traditional family that hold our families and communities together.”

H.R. 2119, the Family Violence Prevention and Services Improvement Act of 2021, amends federal domestic violence law to make some improvements. One measure requires recipients of some federal grant money to follow anti-discrimination laws and specifically states that it bans discrimination on various grounds, “including sexual orientation or gender identity.”

The law also expands the definition of “underserved populations” to include victims who have trouble accessing services “on the basis of… sexual orientation or gender identity… faith or religious practice or lack thereof.”

In a statement to The Independent, Good said he opposed the anti-domestic violence bill because it would require “faith-based providers to accept views on sexual orientation and gender identity that violate their deeply held beliefs.”

“I believe in God’s definition of marriage without apology, and I will continue to oppose any effort to further undermine timeless truths regarding gender and life,” he said. “Democrats would rather a Christian shelter not serve victims, than continue to hold religious views that do not align with their agenda.”

Earlier this year, House Republicans voted against the Violence Against Women’s Act and the Equal Rights Amendment on the same day Senate Republicans said LGBTQ equality would destroy women’s rights, and complained that women’s rights were not being seen as important as LGBTQ rights.

Good defended his vote against those bills with similarly dubious justifications, saying “This legislation makes it clear that Democrats consider gun ownership a second-class right” because it added serial domestic abusers to the national gun registry of people who shouldn’t be sold firearms for safety reasons. Over half of all intimate partner homicides are committed with a firearm.

Rep. Virginia Foxx (R-NC), another anti-LGBTQ extremist, preceded Good at the podium where she also announced her vote against protections for victims. Instead, she blamed President Joe Biden for domestic violence. She stressed that domestic violence should be addressed “at the local level” and that “government cannot always provide the answers.”

Allowing federal grant-recipients to use their religious beliefs to refuse service to some domestic violence victims will disproportionately harm LGBTQ people, as much of the litigation in the past decade about religious exemptions to anti-discrimination laws has targeted LGBTQ people.

The “most obscure famous artist” was a photographer of lesbian sexuality