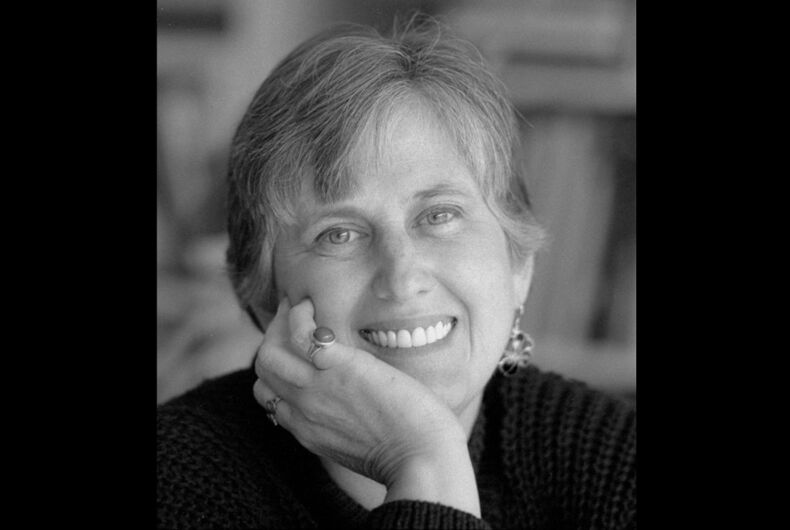 Over her decades as a lesbian photographer and artist, Tee Corinne said “I’m one of the most obscure famous artists.”

Famous? Yes. Obscure? Certainly not within artistic circles nor within the queer art world where she began doing groundbreaking work in the 1960s. According to Completely Queer: The Gay and Lesbian Encyclopedia, “Tee Corinne is one of the most visible and accessible lesbian artists in the world.”

Corinne said in an interview with photographer Barbara Kyne in 2000 about why she chose photography, “I wanted to do something where content and politics could be satisfied. Fine art has problems with accessibility. I was a southerner active in the civil rights movement in the south. Printmaking was one way I could integrate art with politics. Photography is another.”

Corinne wrote of her move to Oregon where she lived in various women’s land communities before settling in her own place outside Medford, “Slowly, in Oregon, I reconnected with the deep levels of creativity that run in me and began producing work which pleased me.”

Corinne was succinct in what she was striving for in her work: “I’m interested in loving, beautiful, sexy images. I also want the images to be a turn-on, create an adrenaline high, a rush of desire so intense that the act of looking is sexual.”

In Beyond the Static Image: Tee Corinne’s Roles as a Pioneering Lesbian Artist and Art Historian, Stefanie Snider writes that, “Corinne’s work manages to fulfill feminist ideals while also working outside of the norms set up in both the lesbian and mainstream realms of art and art history.”

Writing in Uncommon Heroes, Paula Neves notes that Tee Corinne’s “graphic depictions of women of all shapes, sizes, beauties and physical abilities have departed from both fashionable standards of sexual correctness and from the Playboy mentality.”

Neves’ assessment is accurate. Corinne photographed herself and other women nude more often than not and those depictions fall well outside the patriarchal standards of what female bodies are supposed to look like and the role they should play. Corinne didn’t just shatter the male-gaze stereotypes of lesbians, she shattered and redefined the lesbian standard of photographs by daring to depict butch lesbians naked, disabled lesbians as sexual, and sexual acts between women as almost otherworldly in their sensuality.

Corinne’s work was so far outside heterosexual norms that it was frequently the subject of censorship. In 1998, Corinne’s Cunt Coloring Book was used by the Traditional Values Coalition as an example of pornography in a presentation to the Senate. Her book was also cited as exemplifying the personal peccadillos of James Hormel, a gay San Francisco philanthropist who had been nominated by then-President Bill Clinton for the ambassadorship to Luxembourg. Corinne’s book was, at that time, part of the Gay and Lesbian Center of the San Francisco Public Library that Hormel had helped fund and which is now named for him.

What defined Corinne as both an artist and person was her boundless curiosity. She was relentlessly interested in everything, and her excitement at uncovering something new — like a tidbit of art world gossip from this century or another — was accompanied by an entre nous telling of the story that was, due to Corinne’s excitement at the discovery, as intriguing for the listener as it was for her.

That burning interest kept her vision expansive until her untimely death from bile duct and liver cancer in 2006 at 62.

Born in St. Petersburg, Florida in 1943, Corinne began carrying a camera at eight and writing about her artistic vision in high school, filling notepads with drawings and other images.

Corinne studied art and painting at Newcomb College in New Orleans, then earned a B.A. in printmaking and painting, with minors in English and history, from the University of South Florida in 1965.

Corinne was awarded a Masters of Fine Arts in drawing and painting from Pratt Institute in 1968, after which she began teaching college art courses. She moved to San Francisco in 1972 and worked briefly in the sex education field, which propelled her into other artistic work.

She also started drawing female genitalia and collected those drawings, self-publishing them in Cunt Coloring Book in 1975. When the lesbian publishing company Naiad Press was formed in 1973, Corinne created the first 50 covers.

Corinne’s work expanded into art history and art criticism. She wrote about art for a variety of publications and, from 1987, was the art books columnist for Feminist Bookstore News.

She was a co-facilitator of the Feminist Photography Ovulars (1979-1981) and a co-founder of The Blatant Image, A Magazine of Feminist Photography (1981-1983). A co-founder and past co-chair of the Gay & Lesbian Caucus, an affiliated society of the College Art Association, she also co-founded the Women’s Caucus for Art Lesbian & Bisexual Caucus.

This work was an integral part of her oeuvre as an artist, and throughout her life, Corinne researched to uncover the work of lesbian and other women artists.

Corinne’s final work was Scars, Stoma, Ostomy Bag, Portacath: Picturing Cancer In Our Lives. The subject was her partner Beverly Brown’s body during the last year of Brown’s life when she was dying of cancer.

Corinne said, “The images we see, as a culture, help define and expand our dreams, our perceptions of what is possible. Pictures of who we are help us visualize who we can be.”

Moonforce Media created the Tee A. Corinne Prize for Lesbian Media Artists in 2006 to annually honor Corinne as an artist with bold vision and a fierce dedication to encouraging and preserving lesbian art. The award is an unrestricted grant of up to $1,000 annually. The prize is dedicated to artists working in photography, film, video, digital media, new media, or any fusions of these forms and in any genre including documentary, narrative, experimental, or any other styles or combination of genres. The award furthers Corinne’s wish that individual lesbian artists be financially supported to work independently and without censorship.

Corinne’s work is archived at the University of Oregon Libraries’ Special Collections and University Archives, where it is available for research. The collection includes “correspondence, literary manuscripts, artwork, photographs, artifacts, and other documents that reflect Corinne’s life and work.”