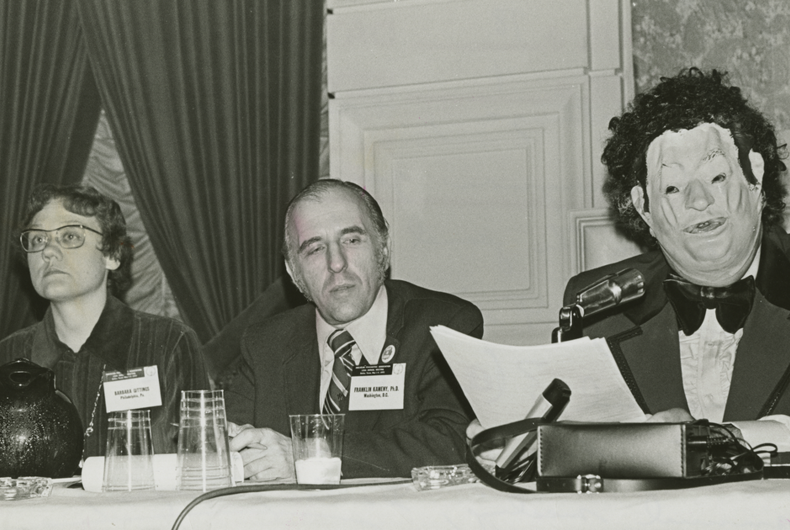 We had been jointly planning our tactics over the past month. I and my compatriots of the Gay Liberation Front and Gay May Day collective, friends from the Mattachine Society, and members of the newly-formed Gay Activists Alliance were to gather on this bright morning during the first week of May in 1971 and carpooled up Connecticut Avenue in northwest Washington, DC to the Shoreham Hotel.

Also uniting with us were people from out-of-town who joined us as part of “Gay May Day” as we attempted to shut down the federal government for what we considered as an illegal and immoral invasion into Vietnam.

Related: Outrage after woman diagnosed with “homosexuality” by her gynecologist

We parked about a block away since we didn’t want hotel security and attendees at the annual American Psychiatric Association conference to notice a rather large group of activists sporting T-shirts and placards announcing “Gay Is Good,” “Psychiatry Is the Enemy,” and “Gay Revolution.” Half the queer men decked themselves in stunning drag wearing elegant wigs and shimmering lamé dresses, glittering fairy dust wafting their painted faces.

A year before, activists demonstrated outside the APA conference held in San Francisco. As a result, conference organizers conceded to permit a panel to lead a discussion workshop at this year’s annual conference in DC under the title “Lifestyles of Nonpatient Homosexuals.”

The panelists included Dr. Franklin Kameny, Director of Mattachine DC; Barbara Gittings, Director of the Philadelphia office of Daughters of Bilitis; and Jack Baker, first “out” U.S. student body president at the University of Minnesota.

In their capacity as official conference panelists, they were granted inside access to all proceedings, including admission to the annual Convocation of Fellows, in which all attendees were to hear U.S. Attorney General Ramsey Clark deliver the keynote address in the hotel’s over-the-top Regency Ballroom.

Earlier in the week, some of us checked out the hotel’s layout. The day before, a comrade placed a wedge in a doorway coming from the Rock Creek Park woods into the hotel, where we gained access.

All along, the panelists were to serve as our Trojan Horses. After the Convocation was called to order, and halfway through Clark’s address, our insiders opened the doors, and in we poured chanting, waving, shouting. On stage, we witnessed a stunned Attorney General surrounded by similarly stunned and also upset APA officials, and seated in the front rows we noticed elderly men who wore gold medals around their necks.

When they saw us, they stood and began beating us with their medals while shouting “Get out of here. We don’t want any more people like you here!” Others yelled: “You’re sick, you’re sick, you faggots, you drag queens!”

Other psychiatrists stood up from their seats and attempted to push us physically from the hall. I was able to escape their grasp, and I sat locking arms with a contingent on the floor just beneath the stage.

I then saw Franklin Kameny rush the stage and grab the microphone, his booming voice cracking through the pandemonium even after the technician cut the power.

“Psychiatry is the enemy incarnate,” he yelled, the anger seemingly oozing from his pores. “You may take this as a declaration of war against you!”

And this was, indeed, our intent: to declare war on the psychiatric profession for the atrocities, the colonization, the “professional” malpractice it had perpetrated over the preceding century in the name of “science,” the biological and psychological pathologizing of sexual and gender transgressive people.

Psychological professions have often proposed and addressed, in starkly medical terms, the alleged “deficiencies” and “mental diseases” of LGBTQ people.

During what has come to be known as the “Eugenics” movement in science (coined by Francis Galton in England in 1883 from the Greek word meaning “well-born” or “of good origins or breeding” in which the socially constructed hierarchical concept of “race” was codified), some members of the scientific community viewed people attracted to their own sex as constituting a distinct biological or racial type — those who could be distinguished from “normal” people through anatomical markers.

Members of the medical professions have committed lesbians, gay males, bisexuals, and those who transgress so-called “normative” gender identities and expressions (often against their will) to hospitals, mental institutions, jails and penitentiaries, have forced pre-frontal lobotomies, electroshock, castration, and sterilization. We have been made to endure “aversion therapy,” “reparative therapy,” “Christian counseling,” and genetic counseling.

The first Diagnostic & Statistical Manual of Mental Disorders (DSM-I) (the APA-sponsored and endorsed handbook of mental disorders) published in 1952 listed homosexuality, for example, as a form of sociopathology. The “updated” 1968 DSM-II described homosexuality as an “Ego-Dystonic Disorder,” a mental illness in a similar category with schizophrenia and manic depressive disorder.

The year following our storming the Shoreham Hotel’s Regency Ballroom, APA held its next annual conference in Dallas, Texas. No activists propped open a side entrance, and no multi-group contingent burst into the assemblage, for something seemed to have changed within the organization over the intervening year.

Barbara Gittings and Franklin Kameny again presented their views and facilitated a workshop discussion, this time joined by “Dr. H. Anonymous” (a.k.a. psychiatrist Dr. John E. Fryer) wearing a costume mask to hide his identity and who discussed his experiences as a gay psychiatrist and member of the APA.

By 1973, the American Psychiatric Association had finally changed its designation of homosexuality, now asserting that it did not constitute a disorder:

“[H]omosexuality per se implies no impairment in judgment, stability, reliability, or general social or vocational capabilities.”

Two years later, in 1975, the American Psychological Association followed suit and urged mental health professionals “to take the lead in removing the stigma of mental illness that has long been associated with homosexual orientations.”

The American Psychiatric Association published DSM-III in 1980 listing a diagnosis of “gender identity disorder,” which the manual imposed upon transgender people. However, the diagnosis has been updated in its DSM-V, published in May 2013. The subcommittee considered its change to “gender dysphoria” as a more neutral designation, which it views as descriptive rather than diagnostic and pathologizing.

The DSM–5 states explicitly that “gender nonconformity is not in itself a mental disorder.” It also includes a separate “gender dysphoria in children” diagnosis. The APA and its DSM, however, still need to go further in precisely depathologizing gender diversity.

I am very proud of the actions we took during those difficult and also exhilarating times. We contributed our small piece to the large jigsaw puzzle of queer history, a piece that when interlocked with all the other pieces, as we comrades interlocked arms to prevent the outraged psychiatrists from evicting us from the Regency Ballroom, have exposed the biases and, most importantly, the foundational power dynamics in the social constructions of “abnormality,” “disease,” “mental illness,” “hysteria,” “disability,” “immaturity,” for us and for so many other marginalized groups, including women, people who are differently-abled, young people, and elders.

Following our successful and historic zap on the APA psychiatrists that day in May 1971, we exalted comrades returned to the Gay Liberation Front commune in Northwest DC, and we sang in unified and joyous harmony “When the Gays Go Marchin’ In.”

And in fact, we did!