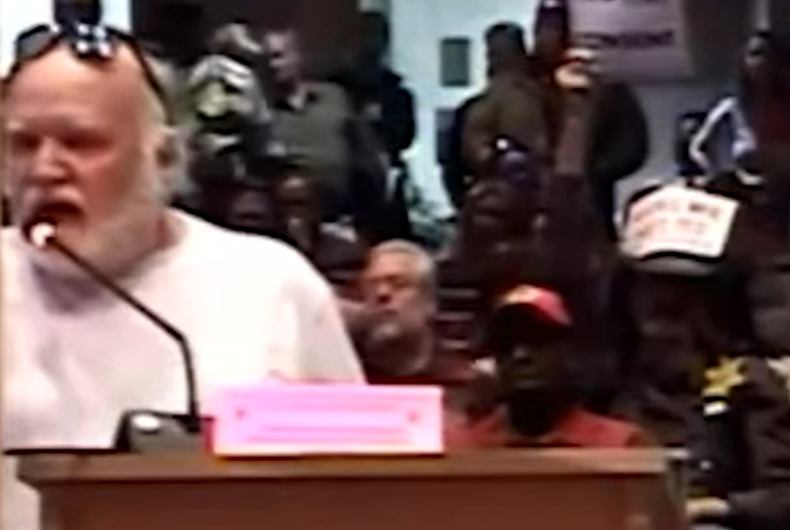 A failed Republican candidate in Alaska who recently called an out gay politician a “cocksucker” during a city assembly meeting about a mask mandate has died of COVID-19 at age 74.

Paul Kendall ran for office at least three times and failed each time. But that didn’t stop him from getting involved in politics as an activist, becoming a gadfly in Anchorage politics.

Kendall opposed mask mandates until the end of his life, ranting about them at a meeting of the Anchorage Assembly in September as Alaska faced the biggest surge of COVID-19 yet.

“Don’t you dare ever, ever mask up my grandchildren or my children,” he said in a speech that was caught on video. “That’s assault. That’s a life-threatening assault.”

He said that the assembly was denying his “freedom” and then turned to Assemblyman Chris Constant, a supporter of the mask mandate.

“Mr. Constant, I bear you no ill-will, I thought you were just a cocksucker but you’re a coward,” he said as his supporters cheered. He was then escorted out of the building by security.

“I’ve been called worse by better,” Constant said after the meeting. “It’s not worth my breath.” He added that it showed Kendall’s “quality of character” as well as that of the people who cheered him.

Many of those who cheered at the meeting wore yellow Stars of David to compare mask mandates to the Holocaust. “Do not comply” was written on the Stars of David in English, printed in a Hebrew-esque font. Local Jewish leaders have spoken out against anti-maskers using that as a symbol.

Just weeks later, the website SorryAntivaxxer.com reports that he passed away due to COVID. Fellow Alaska activist Dustin Darden posted a message to Facebook saying that Kendall “is now a victim of the global elite at Alaska Regional Hospital.”

“This man spoke bold words and his efforts were not in vain,” Darden wrote. “We will continue to fight in love with the word of God, the pen, and the laws on the books with the grit and vigor Paul carried.”

Man who would've ever imagined this guy would die of covid? pic.twitter.com/tcuLDtkNcu