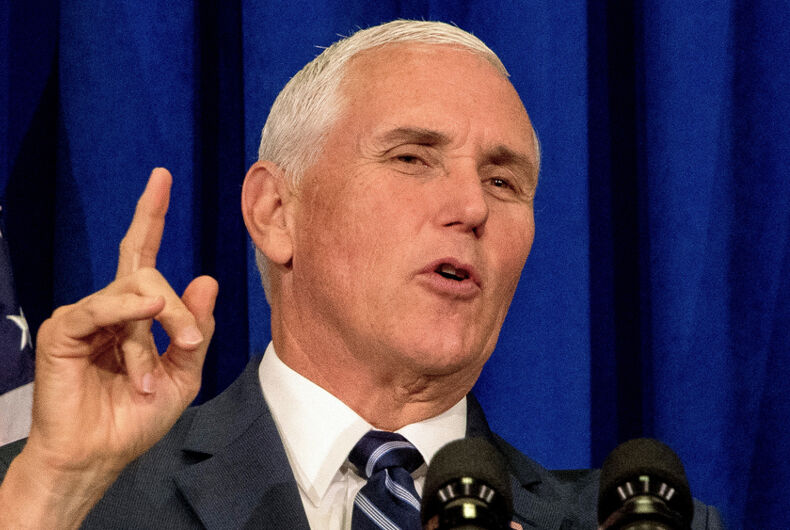 A college professor filed a lawsuit this week after she was allegedly fired for saying that anti-LGBTQ former Vice President Mike Pence has a “demon mouth.” She is accusing the public school she worked at of violating her First Amendment rights.

Lora Burnett was a history professor at Collin College, a public community college in McKinney, Texas. During the vice presidential debate last year, she tweeted, “The moderator needs to talk over Mike Pence until he shuts his little demon mouth up.”

She wasn’t the only person who watched that debate who was annoyed with how Pence constantly tried to talk over Vice President Kamala Harris – even Harris herself had to tell Pence that she was talking – but Burnett may be the only one who got fired for discussing it.

The tweet got attention on rightwing media. Fox News published an article about female college professors insulting Pence and included her tweet, and the article even suggested that her political opinions may interfere “with her ability to teach in an unbiased way.”

Matkin said that he was “aware of the situation” and that he “will deal with it.” He bid Leach “good luck in November,” possibly referring to the upcoming election.

The college then gave Burnett an “employee coaching form” as a warning about her personal social media use. The form said that she could post what she wants, but Burnett said it felt like a punishment and bothered her for months.

In January 2021, she linked an obituary for a fellow professor at Collin who died of COVID-19, saying he was “another Collin College professor” who “has died of COVID.” She and other professors had been critical of how Collin College was handling the pandemic, while administrators said that reports of COVID-19 deaths were “clearly inflated.” She had already called out the school for being late to share news of student and faculty deaths with the college community.

The college issued a “level 1 warning” against Burnett. She was told that her tweet was inaccurate since the professor was a “former employee” of the college. The obituary just listed Collin College as a place the professor worked but did not specify the dates of his employment.

A month later, Collin College refused to renew Burnett’s contract. She filed a complaint with the school, but the college denied it.

Since Collin College is a public school, Burnett says that her speech was protected by the First Amendment, since firing her for her personal social media statements is effectively the government punishing her for a speech act. Communications that are a part of a teacher’s job duties, though, don’t get the same protection.

Burnett’s not the only Collin professor who is suing over an alleged free speech firing. Former Collin education Professor Suzanne Jones says that she was fired after she wrote an op-ed opposing Confederate statues in Dallas in 2017. She was told by an administrator to remove Collin College from her signature in the op-ed, but she didn’t.

This year, she was told her contract would not be renewed, and she was allegedly told by an administrator that it was because of the op-ed in 2017 and her opposition to the school’s pandemic response. She filed a complaint but was refused, with another administrator telling her that her personal social media posts about COVID-19 were to blame.

In 2019, Leach, the Texas GOP lawmaker who texted Burnett’s boss about her tweet, defended the state’s “Save Chick-fil-A bill” because “I don’t think you should be able to argue with the organizations that Chick-fil-A chooses to support,” referring to the fast food chain’s financial support of anti-LGBTQ organizations.