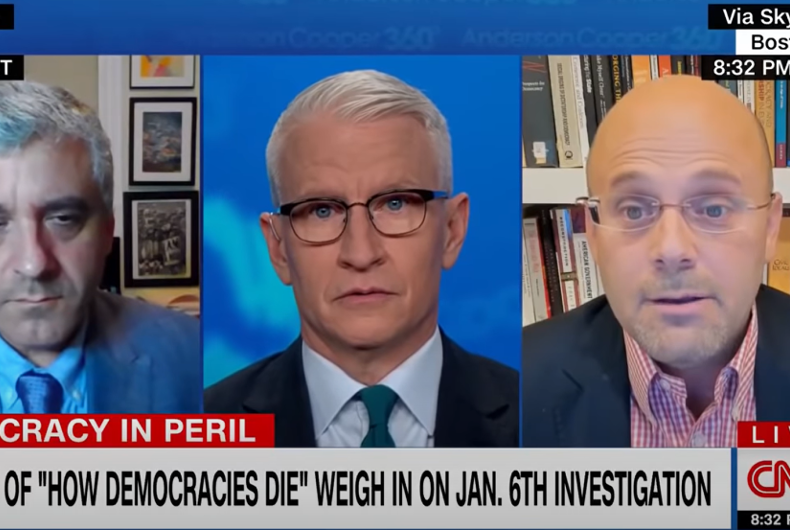 Out CNN host Anderson Cooper said Harvard political scientists Steven Levitsky and Daniel Ziblatt’s description of the Republican attacks on democracy this past year are “terrifying.”

Levitsky and Ziblatt wrote When Democracies Die after the 2016 elections, where they focused on how “mutual toleration” in political systems – that is, having enough respect for one’s political opposition to see their power as legitimate even if one doesn’t agree with them – is eroded as countries descend into authoritarianism.

Levitsky said that they wrote their book about how “the Republican Party… allowed Donald Trump to be elected [in 2016]. They sort of dropped the ball and failed to protect our democracy from an authoritarian demagogue.”

“We did not expect that the entire Republican Party would evolve into an anti-democratic force, and that’s where they are today,” he said. “The entire Republican leadership, with a small handful of exceptions, is now no longer willing to accept electoral defeat.”

Ziblatt brought up historical examples of European democracies that descended into authoritarianism in the last century, noting that anti-democratic forces attacked elections as illegitimate before seizing power. He said that “how mainstream politicians and establishment figures respond to events like this determine our fate.”

“That’s terrifying, that a lot of it depends, at a juncture like this, on what our political leaders choose to do,” Cooper responded. “That’s… that’s pretty stunning.”

Levitsky said that he and Ziblatt were accused of being “alarmist” when their book first came out in 2018.

“After January 6th, after Donald Trump spent two months incessantly trying to illegally overturn the election, it’s really difficult to deny that we’re in a dangerous place,” he said.

Levitsky predicted that if democracy dies in the U.S., it won’t be the result of a violent confrontation but something like a state legislature throwing out the votes from a county where Democratic voters are concentrated or choosing alternate electors for the electoral college that don’t reflect the voters’ will, nullifying the democratic process.

The Dutch princess can marry another woman & still become Queen