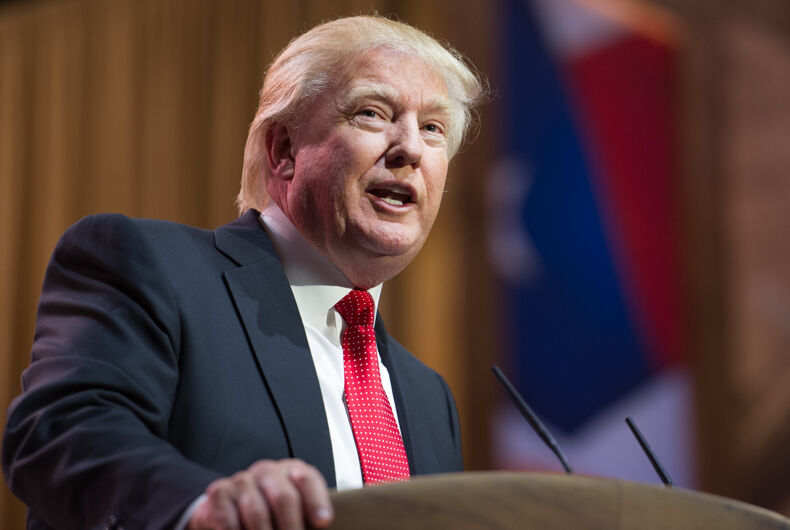 The one thing you can count on in the era of Trumpism is that no idea is too outlandish. That’s why the latest rumor floating around is not entirely out of the realm of possibility. It’s also likely to be a talking point in next year’s midterm elections, when the GOP hopes to re-capture the majority in Congress.

The rumor is that, if Republicans win back the House of Representatives, they will choose Donald Trump to be the Speaker of the House.

Related: Respect for the United States has soared around the globe since Joe Biden became president

As far-fetched as that sounds, there’s no legal barrier to Trump becoming Speaker of the House. The Speaker does not have to be an elected member of Congress. The position outlined simply allows a major of the House to choose anyone. There is no stated age or citizenship requirement. However, since the Speaker is second in the line of succession for the presidency, the Speaker would have to be at least 35 years old and a natural-born citizen to hold the office.

Every Speaker of the House in American history, thus far, has been a member of Congress though. However, given all the norms that Trump and his fellow Republicans have broken, what’s one more to break? Republicans in Congress who know how to stoke Trump’s ego are happy to encourage the prospect.

“Can you just imagine Nancy Pelosi having to hand that gavel to Donald J. Trump?” mused Rep. Matt Gaetz (R-FL), currently being investigated for sex trafficking, to a crowd in Iowa this summer. “She didn’t like when that Jan. 6 guy was sitting in her chair in her office. She is sure not going to like seeing Donald Trump sitting in her chair.”

(By the way, the “guy in the chair,” Richard Barnett, was part of the Capitol insurrection aimed at overturning the election results. He has pled not guilty to multiple federal charges and is awaiting trial.)

Such talk resonates with its intended target. Trump hasn’t refused to rule out the possibility, in typically slippery terms.

“Well, I’ve heard the talk and it’s getting more and more, but it’s not something that I would have considered. But it is — certainly there’s a lot of talk about it,” the former president said in an interview.

The downside for Trump is that the position actually involves work. Much as Trump would love all the attention that being Speaker would bring, he amply demonstrated as President that he can’t be bothered with showing up during work hours, let alone doing any of the tedious tasks of governing.

Moreover, the man that Trump would have to offload his work to, Kevin McCarthy, is salivating at the prospect of replacing Pelosi himself. McCarthy is perhaps the most feckless GOP leader in modern times, so he would no doubt cave to Trump’s whims.

The problem is that the virtually every Republican in the House of Representatives caves to Trump’s whims. If Trump were to get serious about the position, they would drop everything to give it to him. That would be the worst thing that could happen to the GOP.

Ramping up the talking about a “Speaker Trump” will certainly thrill his hard-core followers. It would also disgust Democrats and Independents who turned out in force to throw Trump out of office last year.

“If we lose this election, it’ll be because the election’s not about Joe Biden, but about Donald Trump,” Republican strategist John Feeher, who worked for House Speaker (and convicted sex offender) Dennis Hastert, told NPR. “I know that Trump believes that everything good happens when the people talk about him. But actually, in this midterm election, for Republicans to be successful they need to kind of keep the focus on Joe Biden’s failures, not Donald Trump’s speakership.”

The flip side is that Democrats love nothing more than the opportunity to use the rumors to their benefit.

“The idea for some that Donald Trump could become the speaker of the House is almost as frightening as the idea of him becoming president again,” Democratic strategist Karen Finney also told NPR. “That will potentially advantage Democrats — again, just the fear of it, just the very thought of it.”

As with so much else Trump-related, the rumor is probably nothing more than hot air. Trump is focused on the 2024 election and the money that he can make for teasing a run for president again.

But the fact that Republicans would even consider such a possibility is yet another sign of how far down the road to authoritarianism they are willing to travel with Trump.