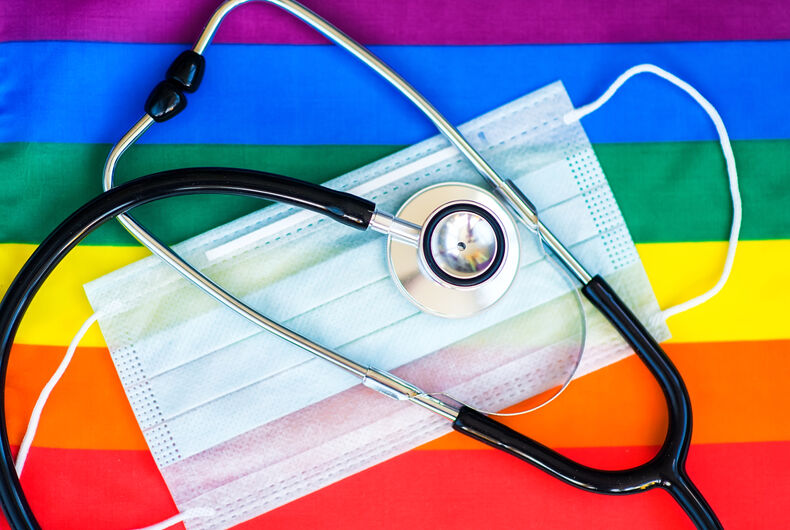 LGBTQ health experts have given the nation their all this year, from helping us navigate safety during the coronavirus pandemic, to continuing the decades-long fight against HIV/AIDS, to expanding gender-affirming health care access.

With a steady hand, these leaders have guided us through unprecedented challenges. LGBTQ Nation has nominated five for Hero Keeping us Healthy.

You can vote now to tell us who who think should be LGBTQ Nation’s Hero Keeping us Healthy.

Our nominees are Michael Donnelly, a statistician who helped the CDC track a Covid-19 outbreak in real-time; Dallas Ducar, the CEO of the country’s first independent trans health care center; Harold Phillips, the new AIDS Czar appointed by President Biden; Jared Polis, who has expertly guided Colorado through the pandemic; and Dr. Stephaun Wallace, who worked to ensure the covid-19 vaccines reached communities of color.

Statistician Michael Donnelly was credited by the CDC for collecting and providing vital data about an outbreak of the delta variant that helped them change their mask guidance to respond to the fast-spreading, more infectious version of COVID-19.

Donnelly used his and his husband’s social network to personally document an outbreak that took place in Provincetown, Massachusetts – a popular LGBTQ vacation spot – over the Fourth of July weekend.

A data scientist in New York City by trade, Donnelly had already worked to forecast the pandemic as it happened with a small team of independent researchers working for the state of New York. He knew declaring an outbreak takes weeks of research.

So he compiled information on his own website, COVIDOutlook.info, and documented 51 people who tested positive for coronavirus in the same three-day period, all possibly from Provincetown.

Donnelly was able to use his knowledge of the LGBTQ social scene in the area to help the CDC understand the spread.

“It’s not the easiest thing in the world to go to a meeting with 10 CDC epidemiology experts and explain the intricacies of Circuit Week versus Bear Week and just how many hundreds of people they can squeeze into those spaces with terrible music,” Donnelly told NPR. “I’ve been telling my friends, you haven’t lived until you’ve talked about twinks with the CDC.”

Dallas Ducar has dedicated her career to making healthcare more accessible to the trans community.

According to the Center for American Progress, almost half of transgender people have been discriminated against or had a negative experience with a health care provider. This mistreatment not only affects the quality of trans people’s care, but it also leads to increased hesitancy to seek medical care at all.

In Massachusetts, Ducar is trying to change that.

Ducar is the founding CEO of Transhealth Northampton, which opened in May as a groundbreaking, trans-led independent health care center.

The trans-led organization is devoted to providing high-quality, gender-affirming health care to trans people of all ages, both in person and virtually, across the state. The center was made to create a safe space for trans people to receive health care and build community.

Being gender-affirming is not just creating gender-neutral systems and spaces, but intentionally creating opportunities to be seen, known, and heard. ✨💛🥰

“Trans folks have been locked out of health care for most of at least modern American medical history,” Ducar told The Daily Hampshire Gazette. “We’re really trying to center those voices that have really been left out.”

A certified clinician, she added that Transhealth Northampton is especially focused on trans people in rural areas, which face a dire lack gender-affirming healthcare.

Rural trans communities, like so many minoritized groups, need telehealth. We must increase availability, not rescind it.

Read more about it in my latest piece for @TheHillOpinion:https://t.co/bv2geEtk76

In June, President Joe Biden announced the appointment of Harold Phillips as the new Director of the White House Office of National Aids Policy, a position informally known as “the AIDS Czar.”

Biden has made clear his dedication to increasing federal funding for HIV/AIDS prevention programs, and Phillips is leading the Administration’s efforts.

Even nominating Phillips to the position was a sign of the Biden administration’s commitment to ending the HIV epidemic; the role was left vacant for years because Donald Trump didn’t appoint anyone to it after Barack Obama’s appointee left.

Phillips previously worked as the Senior Advisor in the Office of Infectious Disease and HIV/AIDS Policy (OIDP), which is under the Department of Health and Human Services (HHS). He also was Director of the Office of HIV/AIDS Training and Capacity Development (OTCD) at the Health Resources and Service Administration’s (HRSA) HIV/AIDS Bureau.

Phillips, a gay man, has been living with HIV since 2005. He is now helping to usher in a more aggressive national strategy to fight this decades-long epidemic.

‘As a black, gay, virally-suppressed, HIV-positive man, I am encouraged by the new #GlobalAIDSStrategy’
Bold personal endorsement for #GlobalAIDSStrategy from Harold Phillips, head of the @WhiteHouse Office of National #AIDS Policy at #PCB48🙏👍 @UNAIDS @Winnie_Byanyima @PEPFAR pic.twitter.com/dkm3krBrKu

Like anyone tasked with leading this nation through the pandemic, out Colorado Gov. Jared Polis (D) has certainly had his work cut out for him. The first out gay governor in the country, Polis took on the governorship before he knew the impossible challenges laying in wait. Nevertheless, he rose to the occasion, working tirelessly day and night to keep Coloradans safe.

As with all political leaders, people didn’t always agree with his decisions about when to lock down, when to open back up, and the myriad of other difficult choices he has had to make every day. But Polis pushed on, and with a steadfast, unrelenting approach, continued to do what he thought was best for his state.

Right now, Colorado’s death rates are some of the lowest in the country.

A recent profile of Polis in The Colorado Sun chronicles his journey leading Colorado through this crisis, a journey that includes reading “every article published” about Covid-19.

“A lot of days I thank God that he’s in charge,” Polis’s Chief of Staff Lisa Kaufmann told the Colorado Sun, “because he really has pushed us to break old paradigms and push norms and meet the moment of whatever it is we’re dealing with.”

Polis and his partner Marlon Reis tested positive for COVID-19 in November. Reis needed to be hospitalized, and in a tizzy of love and fear Polis got down on one knee and proposed shortly before Reis was taken in.

This remains a pandemic of the unvaccinated and we know that the Delta variant has threatened our progress, our economy and way of life and the FDA approval of the vaccine is a step forward.https://t.co/n12P4lO24i

Dr. Stephaun Wallace, an epidemiologist with the Fred Hutchinson Cancer Research Center, has helped lead the effort to ensure COVID-19 vaccines and vaccine trials are accessible to communities of color.

Through his work as head of external relations for the COVID-19 Prevention Network, which has been in charge of overseeing vaccine clinical trials, Wallace focused his outreach on ensuring enough people of color were represented in the trials – and also that communities of color trust the vaccines.

“Acts of racism in the medical establishment are not just historical,” Wallace told Bill Gates in an interview, talking about why many people of color don’t trust the health care system. “People are still very actively experiencing these very same sort of abuses and traumas today.”

At the same time, Wallace knows how important it is for people to get vaccinated, as the pandemic has had an outsized effect on them.

When COVID-19 trials began, Wallace worked with experts to design recruitment strategies that would attract people of color to participate. He worked on digestible messaging that didn’t use confusing scientific jargon, and he himself even participated in one of the trials. His efforts worked. Wallace said more people of color were involved in COVID-19 trials than he typically sees.

Wallace is also head of external relations for the HIV Vaccine Trials Network, which is working to find an HIV vaccine.

Who is your 2021 Hero Keeping us Healthy? Vote now!