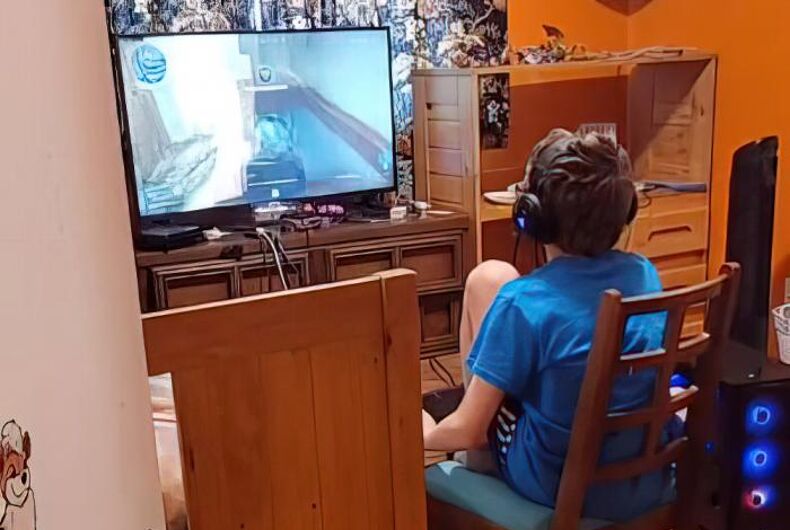 A 12-year-old told off other games who were making anti-LGBTQ comments.Photo: screenshot

A 12-year-old has gone viral in a pair of videos posted by his lesbian sister on TikTok. She stood behind him in the doorway while she recorded.

The boy can be seen playing a video game while chatting with other players on a headset. But it’s what he said that’s hitting everyone in their feel-goods.

When his friends said they don’t like LGBTQ people, the young man was quick to react.

“You seriously have a problem with people being gay?” he asks one of the players. “So you’re homophobic?”

Play continues for a little bit as the other kid responds.

“So you just blatantly admit to being homophobic?” the boy says in response. “You realize that means I automatically don’t like you? Because that’s really fucked up.”

As the argument continues, the boy tells the other players his sister is a lesbian.

“She’s gay and you blatantly said you don’t support gay people,” he continues, driving his point home. “I genuinely do care, and I want to have this argument.”

He goes on in another video to try to explain that not all LGBTQ people are gay in his own 12-year-old way, but it didn’t seem to convince the other players.

In an interview with the Daily Dot, the TikTok user confirmed that the argument didn’t have a happy ending. She said both her brother and the other kid ended up “pissed off.”

Still, she’s proud of her little brother for defending her.

“It was really nice knowing that he listens,” she said.

Together the videos have been viewed over a million times.