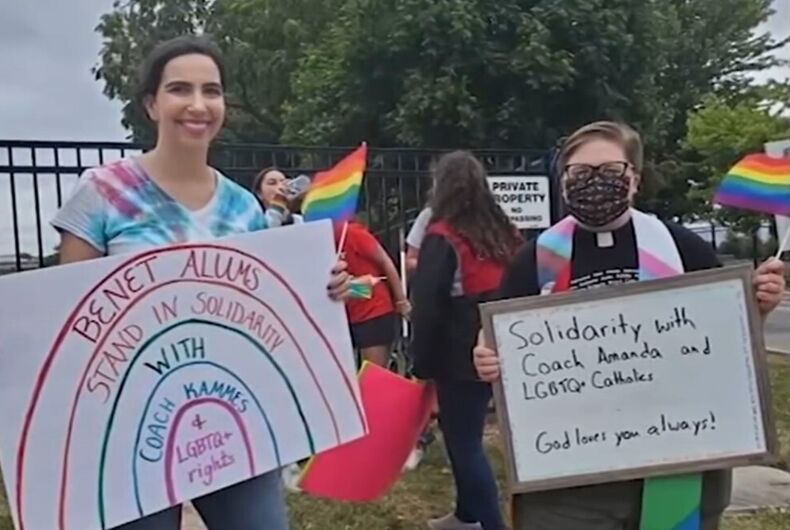 Students and parents at Benet Academy rallied in favor of a lesbian denied a position as a lacrosse coach.Photo: Screenshot

A Catholic high school in the Chicago area has reversed its decision not to hire a lacrosse coach just because she’s married to a woman after students rallied in support of her.

Amanda Kammes was offered a position as the head coach of the girls lacrosse team at Benet Academy, but the school rescinded the offer when she filled out paperwork and put her wife down as an emergency contact.

“Likewise, as a Catholic school, we employ individuals whose lives manifest the essential teachings of the Church,” the school said in a statement, “in order to provide the education and faith formation of the young people entrusted to our care.”

Earlier this week, 40 alumni, parents, and students protested near the campus, shaming Benet Academy for refusing to hire someone because of their identity.

“We are ashamed of your narrow interpretation of Christian morality,” read a petition sent to administration that had over 3000 signatures.

“We write to express our dismay and anger at the news that Benet Academy recently declined employment to an otherwise qualified candidate on the basis of her marriage to another woman,” the petition said. “By rejecting a talented potential staff member on the basis of whom she loves, you have utterly failed to uphold the principles of dignity and charity that you purport to practice as Christian institution.”

And it worked. Benet Academy issued a statement saying that it “has extended an offer to Amanda Kammes” for the same position it had offered her before finding out she is married to a woman.

“The Board has heard from members of the Benet community on all sides of this issue over the past several days,” the statement said. “We had an honest and heartfelt discussion on this very complex issue at our meeting.”

“Going forward we will look for opportunities for dialogue in our community about how we remain true to our Catholic mission while meeting people where they are in their personal journey through life. For now, we hope that this is the first step in healing the Benet community.”

“I am so proud of the girls on the team and of their parents,” she told NBC News. “They have really rallied around Amanda, and it’s been unbelievable. They have blown my mind.”

Kammel has not commented on the matter.