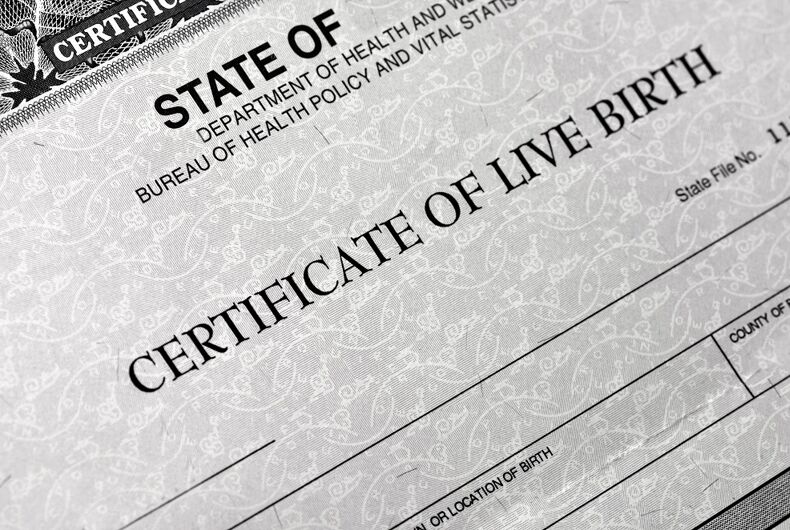 A Republican lawmaker in Utah is trying to ban transgender people from getting gender markers corrected on birth certificates after the state supreme court ordered judges to allow gender marker corrections.

State Rep. Merill Nelson (R) introduced a bill that would ban transgender people from getting correct birth certificates, saying that the law is necessary because “I don’t think it’s sound public policy to equate biological sex with gender identity.”

Earlier this year, the Utah Supreme Court sided with two transgender people who tried to get their birth certificates corrected but were turned down by a lower court judge. While judges have been granting gender marker changes for years in Utah, this judge declared “Some biological facts are not subject to voluntary modification.”

After years of litigation, the state supreme court said that “the sex change we are discussing has less to do with biology than with identity” and ordered courts in Utah to grant gender marker corrections on birth certificates for trans people who present evidence of “appropriate clinical care or treatment for gender transitioning or change provided by a licensed medical professional.”

“It’s been a long time coming, and to be affirmed today? It means the world,” plaintiff Sean Childers-Gray said at the time. Transgender Education Advocates of Utah noted that the decision can help trans people avoid humiliation, discrimination, and violence by not outing them when they present a birth certificate.

But Nelson said that the supreme court decision attacks the “bedrock on what sex means and what gender identity means,” arguing that the sanctity of dictionary definitions is more important than the material impact of the law.

He stressed that he believes that trans people “should be free to declare [their gender identity] any time, any place, and be respected in that gender identity,” except on their birth certificates because “that’s a different document, and sex is different from gender identity.”

He did not state why, if sex and gender identity are completely separate, legal documents need to reflect one instead of the other.

Instead, Nelson says that he’s ready for backlash to his backlash against the state supreme court decision.

“It’s a very delicate issue, a very sensitive issue, a controversial issue. And anyone who undertakes this, be prepared for a lot of arrows,” Nelson said about his bill attacking trans people’s rights.

He introduced similar legislation in 2019 and in 2018 state Sen. Todd Weiler (R) introduced a similar bill in the state senate.

According to the 2015 U.S. Transgender Survey from the National Center for Transgender Equality, 32% of transgender people whose ID didn’t match their gender presentation said they have been harassed, assaulted, denied benefits, or forced to leave as a result.

Almost every state has a process by which transgender people can correct the gender marker on their birth certificates. Idaho attempted to ban gender marker corrections last year, but a federal court overturned that law.

Survivor’s Jeff Probst will stop saying “Come on in, guys” for gender equality

Marjorie Taylor Greene flips out on Capitol steps & gets told off by Michigan Rep. Debbie Dingell