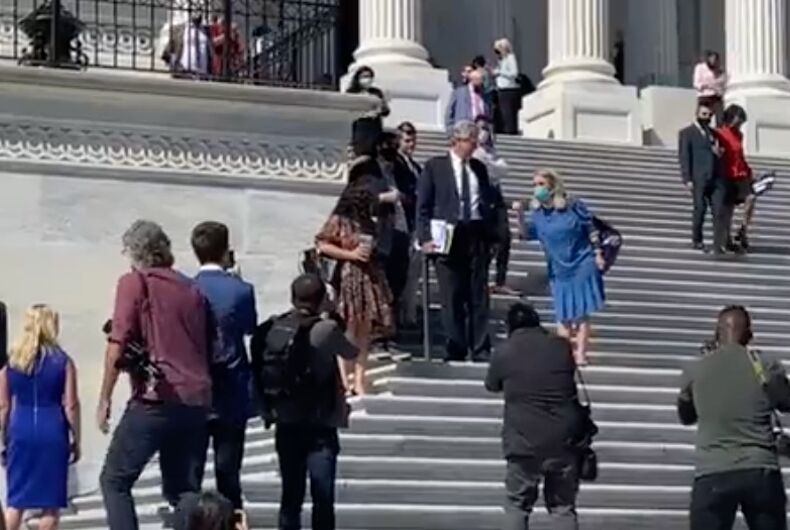 A Democrat press conference was interrupted by Rep. Marjorie Taylor Greene (R-GA) when the congress member descended the steps of the Capitol building and started yelling at lawmakers and reporters.

Green stood at the top of the stairs to yell at several Democratic congresswomen following the passage of the Women’s Health Protection Act to ensure abortion access for women. When they retreated indoors and away from the potentially violent lawmaker, Green turned her sights on a gaggle of lawmakers gathered for a photo-op.

Greene started yelling about the border as she approached the group. The Democrats were taking a photo to commemorate the “Build Back Better for Women” initiative.

“Congresswoman, I wish you would stand with women,” one unnamed woman told Greene, spawning a nonsensical rebuttal that Greene stands with “unborn women” and “motherhood.”

“Horrendous. You should all be ashamed!” Greene yelled at the congress members.

“You should be ashamed of your incivility,” Dingell replied.

“We have lots of laws we follow, and you should practice the basic thing you’re taught in church. Respect your neighbor,” Dingell replied.

“Taught in church, are you kidding me? Try being a Christian and supporting life!” Green sniffed.

“You try being a Christian and try treating your colleagues decently,” Dingell said before stumbling on a step.

“Watch your step, lady, you’re going to fall down,” Green snarled. “Control yourself.”

And then the woman who had descended a long flight of stairs, yelling and demeaning most of the people she saw on her way down and spurring members of congress to seek shelter away from her, spun on her heel and marched off.

“No you’re performative,” she replies pic.twitter.com/DmVDzR7XfD

.@MTG and @RepDebDingell just got into screaming match on steps of Capitol after MTG heckled Democrats holding a press conf after passing legislation responding to Texas abortion law pic.twitter.com/Kq11xko04r