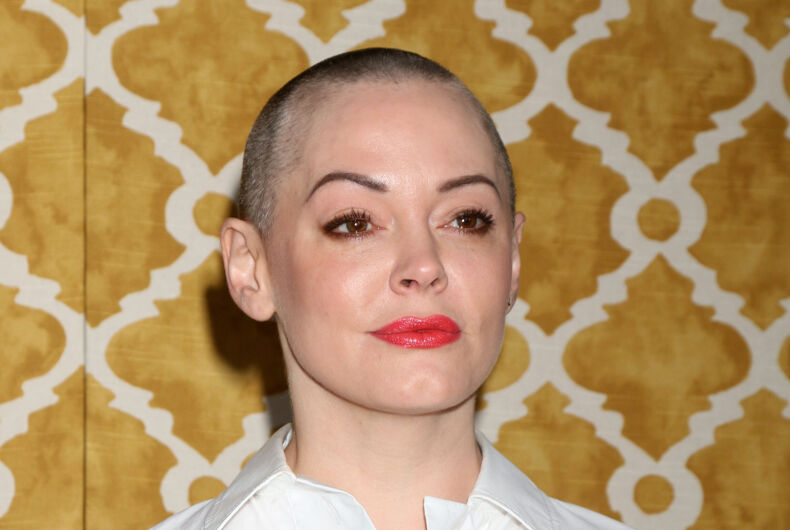 McGowan made her comments while endorsing Larry Elder, an anti-LGBTQ Republican California gubernatorial recall candidate, during a Sunday press conference in Los Angeles. Elder is one of several Republicans – along with Caitlyn Jenner – trying to unseat Gov. Newsom in tomorrow’s recall election.

Related: Republicans are poising themselves to win regardless of the outcome in California’ recall

In 2017, McGowan, an actor and activist in the #MeToo movement, said that Weinstein sexually assaulted her in 1997. At the Sunday press conference, she accused Newsom’s wife, Jennifer Siebel Newsom, of trying to bribe her in order to keep her from accusing Weinstein of sexual assault.

McGowan then said that the Newsoms, the Obamas, and other Hollywood Democrats are “all in on it” — “it” presumably being a campaign to protect Weinstein.

As “proof” of the Obamas’ involvement, she brought up the fact that Malia Obama, Michelle and Barack Obama’s daughter, had an internship at the Weinstein Company immediately after her father left the presidency. Her internship began months before Weinstein was publicly accused of three decades’ worth of numerous sexual assaults by roughly 87 women.

Weinstein was a major donor to Democratic candidates, including Obama.

In January 2020, McGowan came out as a Republican via Twitter, though she initially backtracked, claiming she had only written the tweets because she had “freaked out.” In April, McGowan went on the right-wing cable network Fox News to call Democrats a “deep” cult “against changing the world for the better.”

When a trans woman publicly called her out for her comments at a 2018 book reading event, McGowan accused her of being a “paid plant,” possibly paid by Harvey Weinstein. McGowan then cancelled the rest of the stops in her book tour.

In 2014, she said that gay men are more misogynistic than straight men and gay men spent the last century fighting “for the right to stand on top of a float wearing an orange Speedo and take molly.”

Despite her anti-LGBTQ comments, she has actively campaigned for same-sex marriage.