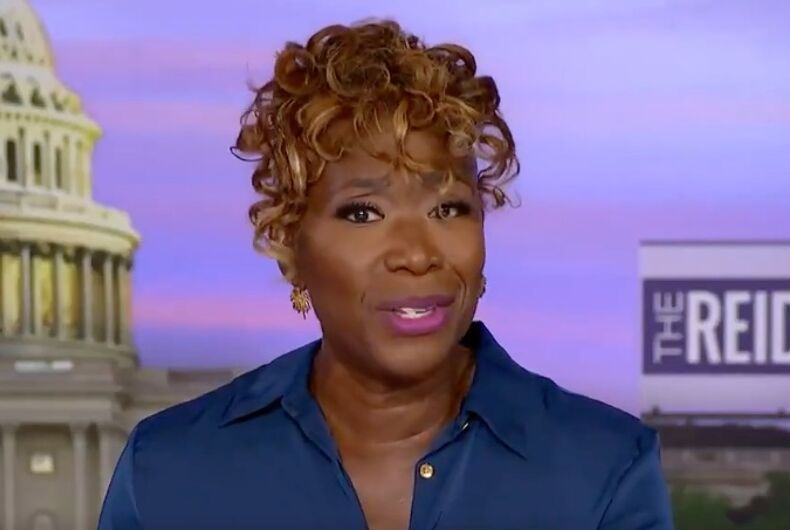 MSNBC host Joy Reid isn’t here for Nicki Minaj’s blatant lies and misinformation about the COVID vaccine. Neither are Trinidad and Tobago’s Health Minister, the British Prime Minister, nor the Biden White House.

But Fox host and white nationalist Tucker Carlson, Trump followers, and the typical MAGA crowd are cheering her on in an abrupt reversal from the slurs they use to talk about Black women.

In a widely mocked tweet, Minaj claimed that her cousin told her about their friend who got “swollen” testicles from a COVID-19 vaccine.

“My cousin in Trinidad won’t get the vaccine cuz his friend got it & became impotent. His testicles became swollen. His friend was weeks away from getting married, now the girl called off the wedding. So just pray on it & make sure you’re comfortable with ur decision, not bullied,” Minaj tweeted after announcing she would not attend the Met Gala because being vaccinated was mandatory for admittance.

As the story grew, Carlson rushed to jump on Minaj’s bandwagon, going so far as to beg the mystery man to appear on his television show to prove her obviously fake claim. He has brought the subject up every night since she tweeted.

Trinidad and Tobago’s Health Minister Terrence Deyalsingh also spoke out, saying that no one had presented themselves to a doctor claiming they had swollen balls after getting the vaccine and that the singer was wasting everyone’s time with her ludicrous tall tale.

“One of the reasons why we could not respond yesterday in real-time to Miss Minaj is that we had to check and make sure that what she was claiming was either true or false. Unfortunately, we wasted so much time yesterday running down this false claim,” Deyalsingh said.

Multiple doctors also pointed out that the idea that men would not report swollen testicles – and this side effect would only get attention now, over a year after clinical trials for the vaccines began – is itself beyond belief.

“As a military urologist if scrotal swelling was a vaccine side effect I would be the first to know. No one is more attentive to their testicles than men in the military,” Dr. John McCauley tweeted.

“As a veterinarian, some men are more attached to their dog’s balls than they are to their own health,” Jessica Kania, DVM, added. “The amount of time your average man spends thinking about testicles, both theirs and others’ is… surprising. The thought scrotal swelling would go unreported is laughable.”

As a veterinarian, some men are more attached to their dog's balls than they are to their own health. The amount of time your average man spends thinking about testicles, both theirs and others' is… surprising. The thought scrotal swelling would go unreported is laughable.

But Joy Reid has spawned outrage among the MAGA crowd for calling Minaj’s statements exactly what they are: deadly.

Reid called out Minaj as an influential Black artist with over 22 million followers on Twitter alone. People believe her and trust her.

Reid sharply pointed out that Minaj was breaking that trust and dooming an untold number of people to an agonizing death if they remain unvaccinated and catch the virus.

“For you to use your platform to encourage our community to not protect themselves to save their lives, my God, sister. You can do better than that,” Reid said. “You got that platform. It’s a blessing. It’s a blessing that you got that. People listen to you.”

“For you to use your platform to put people in the position of dying from a disease they don’t have to die from, oh my God, as a fan, as a hip hop fan, as someone who has been your fan, I am so sad that you did that.”

Joy Reid was 100 percent right. From the very beginning, Black people have been disproportionately impacted by the Covid pandemic. The last thing we need is influential Black artists discouraging Black people from protecting themselves from a deadly virus. https://t.co/qGhCLF7wcg

The black woman lied on me & made ppl attack me. But I can’t quote this man who did the opposite. Okay. FUCK HIM. YASSSSSSSWOOHOOOOOOOOOO happy now? Brain dead https://t.co/kgZuuR19Y9

Minaj also claimed that she had been locked out of her Twitter account due to the controversy. The social media service denied that her account had been yanked. She later continued tweeting more anti-vax commentary and doubling down on her story.

Fought with Joy Reid on COVID.
Gained situational support from white supremacists.
Got a call from the White House to learn something.
Got muted on Twitter.
Had her cousin’s friends story debunked by her country’s health minister.#ThursdayThoughts https://t.co/pcx2KEkf6S

Joy Reid is trending because conservatives, Republicans, progressives and leftists are pissed she said Nicki Minaj is being irresponsible for spewing so much vaccine disinformation Trinidad’s health minister had to debunk it.

When we tell you the horseshoe is real believe us.