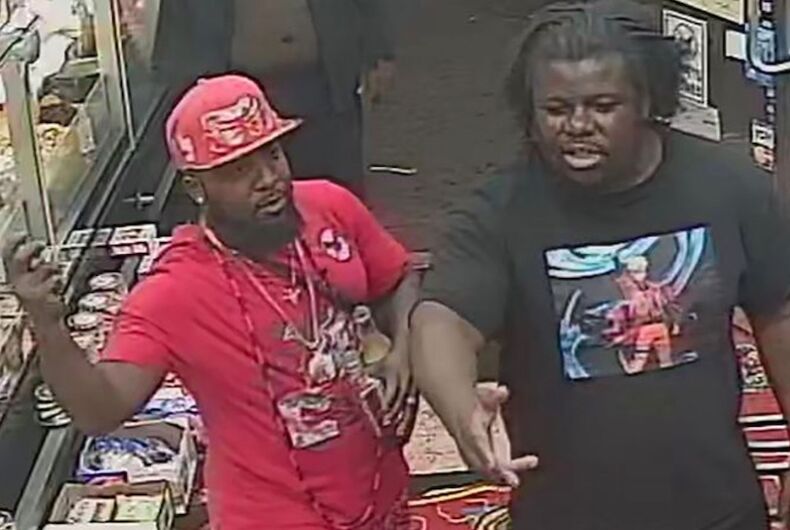 Possible suspects in the attack caught on security camera footagePhoto: via NYPD

Protestors in Brooklyn took to the street as police look for two suspects in an alleged anti-gay hate crime.

Abimbola Adelaja, 36, and a 28-year-old friend went to a bodega on September 4 late at night. According to authorities, three men approached them and started making homophobic comments, calling Adelaja a “faggot” and telling the men “It’s Adam and Eve, not Adam and Steve.”

The alleged assailants then pulled out a glass bottle and a screwdriver and threatened the victims, demanding valuables. They stabbed Adelaja in the chin with the screwdriver and slashed his lip with the bottle, before making off with their phones, wallets, keys, and cash.

Adelaja, who is gay, said that he and his friend were afraid for their lives.

“I’m still physically and mentally trying to get better,” he said yesterday. He said that after the attack he ran into a storeroom and hid while the workers at the bodega kicked everyone out. He said that he left the storage room and asked to use a worker’s phone to call 911, but they just told him to leave.

He ran home but he couldn’t open the door because the alleged assailants took his keys, so he had to flag down an ambulance in the street.

Adelaja suffered from puncture wounds to his chin and chest and a cut on his lips. He said he had a collapsed lung, but left the medical center early since he was afraid of getting COVID-19.

The other victim, who does not want to be publicly identified, had slashes on his right shoulder and right hand and was taken to a different hospital after he was stabbed seven times. He is still in the hospital.

“If someone is in need, you help,” Adelaja said, referring to how the bodega workers wouldn’t help him at all. “I wasn’t expecting them to get involved or jump in, but certainly, you know, getting the phone or calling the cops for me or making sure I was OK are all things that could have been done.”

The NYPD’s Hate Crimes Task Force is investigating the incident and has released security camera images of possible suspects to get help identifying them.

Adelaja organized a protest of the bodega yesterday to hold the business accountable.

“We won’t let something like this make us scared. We won’t live in fear,” he told NBC News. “We’re here, we’re proud people, so we want to hold space to let the community know we’re here, and we’re going to stand up for ourselves.”

What can Paul Simon teach us about Critical Race Theory?