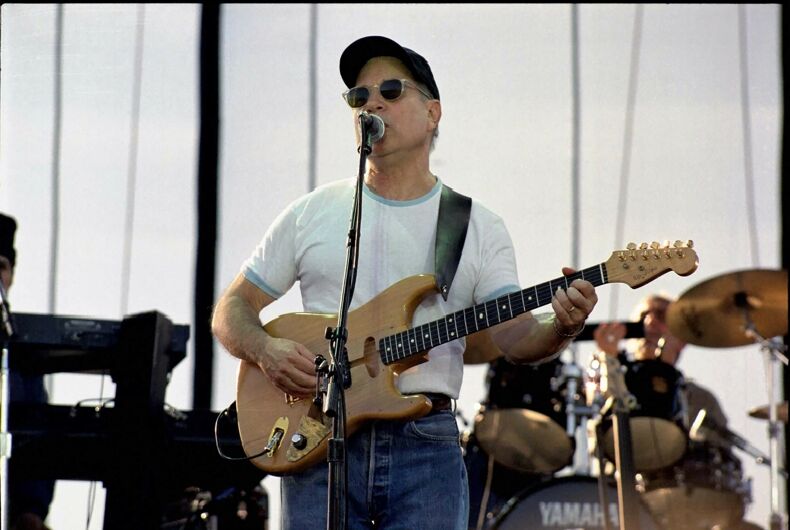 Paul Simon laments in his song “Kodachrome” about the neutralizing, the meaningless, the virtual whitewashing of educational value to the least common denominator in his schooling, about how “everything looks worse in black and white.”

Metaphorically, most schools teach only in black and white, whereas most students want what Paul Simon wanted to be given with “those nice bright colors: the greens of summers, makes you think all the world’s a sunny day, oh yeah.”

Related: Want to know how to raise thriving kids? Follow the stories of these amazing LGBTQ parents.

Unfortunately, Simon’s educational system took his Kodachrome away: the film that exposed the full spectrum of the rainbow from the brightest reds, oranges, and yellows, to the darkest blues and browns, and deepest purples.

We live in a culture that weans and raises up on a white and black pablum supersaturated with hollow calories of the United States as an “exceptional” nation above all nations of the world at all times. Our glorious land was fated by divine destiny to separate from colonial England, subdue the “heathen savages” who preceded us, extend inexorably from “sea to shining sea” and then some, and create the magnificent Constitution devised by our brilliant and essentially flawless “founding fathers.”

We have been taught that ours is a meritocratic national experiment, where anyone of all backgrounds and identities can attain the highest of their goals if they possess the requisite ambition, motivation, work ethic, talents, intelligence, and skills. Anyone who fails, therefore, has only themselves to blame, for success and failure depend on taking personal responsibility.

Anyone who challenges this narrative of the country’s exceptionalism, its meritocratic driving forces, and asserts, instead, another or additional creation story, one founded on a patriarchal Christian white supremacist foundation, for example, others accuse as breaking a sort of sacred taboo, a traitorous libelous heretical breach of trust and confidence, and accuse them of lying.

Surrounding forces – religion, parenting, schooling, and other sources of socialization – inhibit the maintaining of critical thinking facilities in young and old alike. Let us take, for example, Biblical warning in Genesis, 2: 16-17, related to the story of the Tree of Knowledge of Good and Evil in the Garden of Eden:

“And the Lord God commanded the man, saying, ‘Of every tree of the garden thou mayest freely eat: But of the tree of the knowledge of good and evil, thou shalt not eat of it: for in the day that thou eatest thereof thou shalt surely die’.”

The apples on that tree represent knowledge. When picked and eaten, the nutrients from this “forbidden fruit” unlock levels of knowing that can more than overturn the apple cart, but more importantly, can give the knower a full-color spectrum of the workings of the world and of the human character. We must, nonetheless, think only in white and black.

Figures like the biblical Eve and Greek Pandora, women, are blamed for the downfall of “man.” In fact, however, they were strong women who refused to fall under the symbolic and literal thumbs of males.

Additionally, the ancient Greek legend of Prometheus casts a cautionary tale on the gifting of knowledge when the chief of the gods, Zeus, punished him for offering mortals the best of the sections (nutrients) from a slaughtered cow while giving the gods the remaining fat and bones. After an infuriated Zeus takes back fire from humanity, Prometheus stole and returned it to mortals, thus turning the darkness from the spectrum of black and white to technicolor once again.

For Prometheus’ crime of returning light and knowledge to humankind, Zeus had Prometheus chained on the Caucasus mountains and sent an eagle to eat his immortal liver every day, which grew back every night.

Literature and cinema likewise warn of the horrific and often fatal risks of challenging the limitations placed by the powerful on the accumulation of knowledge beyond what is deemed appropriate and permissible.

I interpret the first film in the “Planet of the Apes” franchise, released in 1968, as a recreation of the legend of Prometheus. A U.S.-based crew crash land their space vehicle on a strange planet in the distant future equaling nearly 2000 years of advancement on Earth as they traveled at the speed of light.

The crew led by Taylor (Charlton Heston) – the Prometheus character – discover that the planet is ruled by a species of apes who possess what to the Earthlings appear as human-like qualities, including speech, high reasoning, and cultural artifacts such as museums, medicine, constructed homes, a judicial system, and written religious and governing scrolls.

A community of humans on this planet, on the other hand, lack the facility of speech and operates on a pre-human Earth-equivalent intellectual level. The apes hunt, enslave, and murder humans to keep them from invading their gardens and stealing food and to use them in medical and psychological experiments.

Taylor rebels by protesting his treatment and challenging the hierarchical ranking of apes over humans. Two apes listen to and befriend him, Zira and Cornelius, and they eventually come to believe that what they have been socialized to take as factual, was somehow manipulated and falsified.

Blond furred Dr. Zaius (Zeus), Minister of Science and Chief Defender of the Faith, knows the truth regarding the origins of his species and the rise and fall of humans through industrialization and the power of the atom, which terminated life as it had been once known. His primary objective has been to keep the fire of “knowledge” from his ape community and from humans.

He attempts to destroy any artifacts and other remnants of pre-nuclear holocaust human society to keep alive the myth of perennial simian superiority, and human inferiority and enslavement. Knowledge, therefore, represents overturning the proverbial apple cart undermining origin myths and challenging hierarchal positionings.

These genesis or origin stories and their perpetuation are examples of what we refer to as the concept of hegemony coined by social theorist Antonio Gramsci to describe the ways in which the dominant group successfully disseminate dominant social realities and social visions in a manner accepted as common sense, as “normal,” as universal, and as representing part of the natural order.

This dominant group-controlled production of “knowledge” maintains the marginality of other groups, and it denies options in understanding multiple perspectives from which to construct meaning.

This institutionalization of a hegemonic norm or standard functions to legitimize what can be said, who has the authority to speak and be heard, and what is authorized as true or as the truth, which thereby continues the privileging of socially dominant individuals and groups.

Though Critical Race Theory has been taught primarily in higher education, and specifically in graduate courses in legal studies, charges of imposing CRT on young unsuspecting children so white students will hate themselves for being white have been leveled by conservative legislators and parents alike. This is a ruse, a justification for limiting all school-based discussions and historical investigations on issues of race.

Much like scientific testing for medical treatments and therapies, which must demonstrate that they treat or cure what they are developed to treat and continue to show effectiveness in large samples of patients, so too must social research.

What could be more patriotic and pro-American than for people to confront our nation’s racist past, the foundation on which this nation arose and whose legacy continues to oppress, divide, and divert us finally and completely from our founding concept of “liberty and justice for all?”

A fuller and deeper age-appropriate commitment to teaching the truth from multiple perspectives is far more than exposing historical facts. It relates on an existential level to issues of personal and collective identity. It connects to our ability as a nation to become aware of and acknowledge our past so we can ultimately take constructive actions to work toward a better, more just, and equitable future.

Will a fuller and richer examination of our history upset the apple cart? Will it contradict the sacred scrolls of acceptable knowledge? And if so, is this necessarily bad?