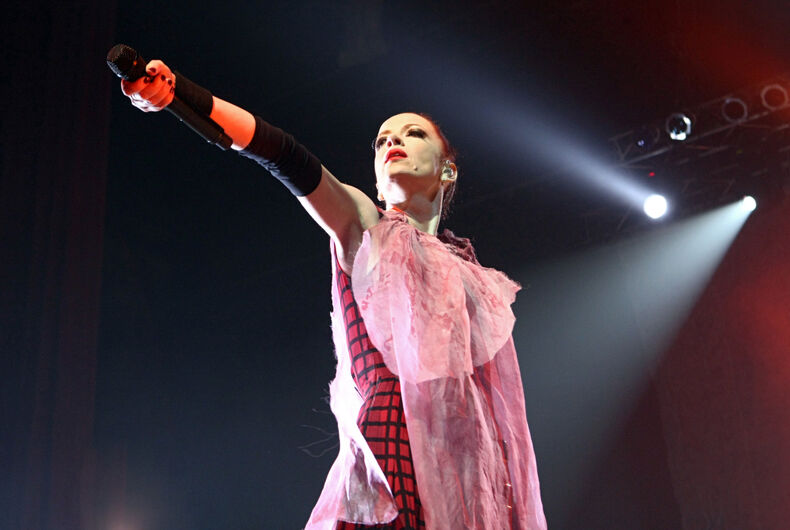 Shirley Manson – the Scottish lead singer of the rock band Garbage – said in an interview that she identifies with the concept of non-binary gender.

“Being a woman who has got a lot of male traits, I’ve always really identified with this idea of non-binary,” she told The Scotsman in an interview to promote the 20-year anniversary of the band’s album Beautiful Garbage.

The band from Wisconsin rose to fame in the mid-90s with their eponymous album that included tracks like “Queer.”

Their third studio album – Beautiful Garbage – was released just weeks after the September 11 attacks on the World Trade Center in New York.

As she put it, the band was experiencing a “fantastic trajectory” until the year 2000, when “that all came to a stunning end with the release of the first single of Beautiful Garbage, which was ‘Androgyny.'”

Manson said the band had a crisis meeting with their label where they were told Radio 1 in the U.K. – a country important to their success up to that point – wouldn’t play “Androgyny.”

In “Androgyny,” Manson sings about now “nothing in life is set in stone” and asks “Why can’t we all just get along?” before the chorus makes the message clear: “Boys in the girls’ room, girls in the men’s room, you free your mind in your androgyny.”

She said that song meant a lot to her because of her own gender.

“As I’ve often quipped over the years, I’ve definitely got bigger balls than my band,” she said, referring to the three other members of Garbage, who are all cis men.

“So the idea of identifying within the spectrum of gender has always made sense to me.”

Manson also spoke out about sexism in the music industry, saying that she faced scrutiny in the 90s that male performers didn’t face. She said she was “one of a few women in music that was very outspoken,” but today women in music are “unafraid to use their voice and their platform.”

“This is not a female problem,” she said when asked about #MeToo. “This is a male problem.”

“As I keep saying, a Me Too movement is not a female movement. It’s a male movement, in many ways, in that women have said their piece,” she continued. “Until we galvanize support from all genders, but specifically men, because it seems to be men who are wreaking the violence upon other human beings for the most part… Only then will we facilitate change.”

Manson has been an outspoken supporter of transgender rights. At a concert in Toronto in 2017, she called out Donald Trump’s transgender military ban: “This goes out to everyone in the military who is transgender, who put their lives on the line for all us.”

“I felt passion overtake me and I suddenly realized that this is a song that we wrote a long, long time ago, long before gender fluidity and transgender, any of it was on all of our lips,” she told the crowd. “And I’m all riled up because it breaks my heart that in this day and age, things have gotten so mad that people who want to put their lives on the line for the American public are being treated with such disrespect.”