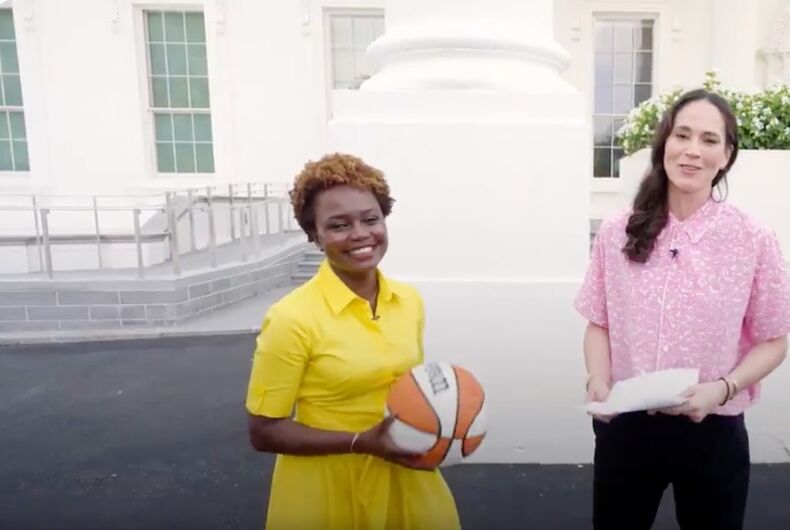 It wasn’t that long ago that the White House Twitter feed was filled with the former president’s many petty grievances and threats against American citizens. With President Joe Biden in office, the tone of the administration has changed dramatically.

Instead of racist invective, the feed even includes celebrity appearances and comedy skits. This time, the focus is on out Principal Deputy Press Secretary Karine Jean-Pierre and Seattle Storm player Sue Bird, who is engaged to soccer icon Megan Rapinoe, as the two out women face off at the White House.

The duo played “role reversal” with Jean-Pierre showing off her moves and Bird fielding questions about Biden’s “Build Back Better” infrastructure plan.

Sen. Kyrsten Sinema (D-AZ) is the only out bisexual member of Congress, but she might as well be serving as the referee for the Biden administration. Sinema has refused to work with the administration on multiple issues, abandoning her professed priorities and angering progressive constituents, activists, and her fellow lawmakers.

A large portion of Sinema’s campaign cash comes from the pharmaceutical industry and she has vociferously opposed portions of the spending that would benefit consumers over drug companies.

Sinema’s recalcitrance has also doomed the Equality Act, landmark legislation that would protect the LGBTQ community from discrimination. All three women would gain instant protection and benefit dramatically if Sinema got on board with her constituents and community.

The Arizona Democratic Party (ADP) voted to adopt a resolution pledging to issue a vote of “no confidence” in Sinema if she does not support filibuster reform or President Joe Biden’s agenda when it is bought before Congress in the coming weeks.

In the motion, passed by over 80 percent of the party, the ADP also floats the possibility of censuring Sinema and withdrawing their support for her if and when she runs for her seat again in 2024.

Karine Jean-Pierre has been nominated in LGBTQ Nation‘s Heroes awards program in the “Hero Rebuilding Democracy” category. Winner will be chosen by popular vote; voting ends on Sept 30.

Drag has gone mainstream. Here’s how it continues to change the world for the better.