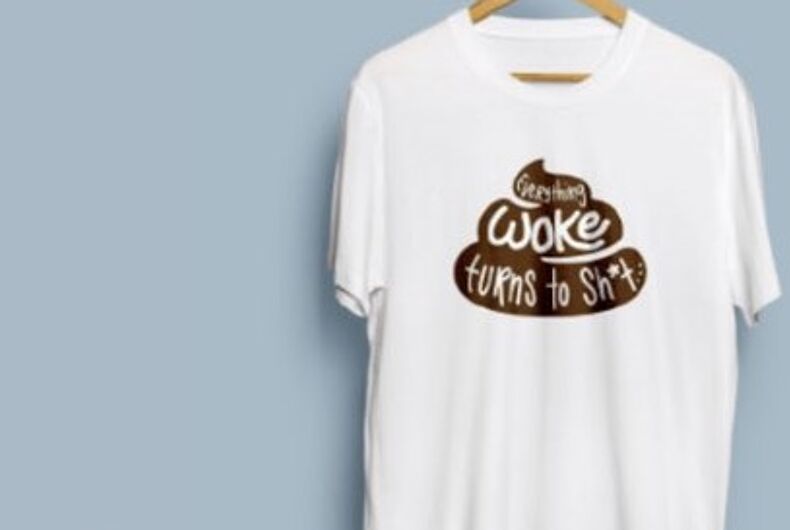 Trump's newest merch is a t-shirt that says "Everything woke turns to shit"Photo: Product detail

Former President Donald Trump has never been known for his class.

But the de facto head of the GOP may have sunk to a new low, selling “Everything woke turns to sh*t” t-shirts a few months after marketing “WOKE” shirts to Black voters.

Related: Out Senator Kyrsten Sinema says she’s willing to tank everything the LGBTQ community cares about

Speaking at a rally in Alabama where the former President decried liberals and Biden’s plans to rebuild the American economy and infrastructure, Trump told the crowd, being woke is a “shortcut to losing everything we have.”

The term originated in Black culture to refer to being alert to injustices, particularly racism. Conservatives have co-opted the word to mean all progressive issues, but it is particularly used by the right to denigrate anti-racism policies and “critical race theory,” a school of thought developed by Black law professors that many on the right believe is being taught in grade school.

“You know what woke means? It means you’re a loser. Everything woke turns to shit. Okay, it’s true. It’s true. Look at what’s happening,” Trump said as the crowd erupted in chants of “USA! USA!”

The internet was quick to point out that Trump’s campaign had previously touted being “woke” when they tried to woo Black voters. The campaign store sold shirts that say “WOKE” and “Black Voices for Trump.”

Former Republican Congressman Joe Walsh, a fierce critic of Trump’s who left the party during the former president’s administration, responded back to the statement on Twitter as well.

“I don’t think ‘everything woke turns to shit.’ I think ‘wokeness,’ like everything else, can be overdone and even weaponized,” he sent. “But generally, ‘being woke’ means being aware. It means opening your eyes and opening your mind to issues of injustice and racism.”

"Everything woke turns to shit!" pic.twitter.com/w5vVoW7syE

“It's really important that we take this next step and really bring those voters into the party." – @KatrinaPierson

It's time to get #woke.https://t.co/ARIobWtiXG

I don’t think “everything woke turns to shit.” I think “wokeness,” like everything else, can be overdone and even weaponized. But generally, “being woke” means being aware. It means opening your eyes & opening your mind to issues of injustice & racism.