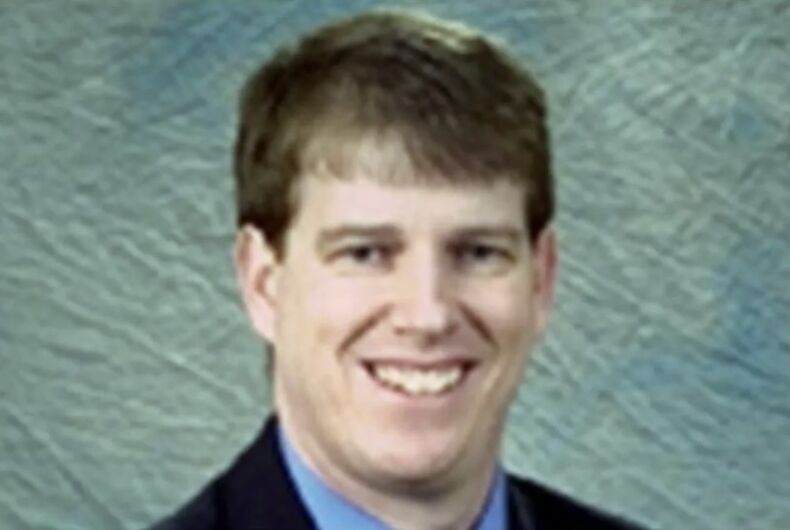 A tennis instructor lost his job after he stood up at a school board meeting and did the Nazi salute while shouting “Heil Hitler.”

Paul Marcum worked at the Sports Club of West Bloomfield near Detroit and he attended a chaotic meeting of the Birmingham Board of Education last Wednesday.

Related: One of the most anti-LGBTQ Congressmen gets COVID after refusing to wear mask

People at the meeting were discussing a mask mandate for the school district, and a Jewish woman and a Black woman spoke in favor of the mandate. That’s when witnesses say Marcum stood up and held his arm out and repeated “Heil Hitler.” It is not clear if he meant to support Nazism or liken the mask mandate to Nazism.

“Birmingham Public Schools emphatically denounces and will not tolerate any act of racism, disrespect, violence, and/or inequitable treatment of any person, including actions and statements made at Board of Education meetings,” Superintendent Embekka Roberson said in a letter to parents. “Last night’s meeting did not consistently display the behaviors that we expect from our students and community.”

Marcum, described by Deadline Detroit as white and middle-aged, made the gesture towards Suzanne Busdieker, who is Jewish, and an unnamed Black woman.

“It’s a hate crime and it happened on school property,” she said. “I’m not taking it lightly.”

Police said that they interviewed Marcum at the meeting and have talked to witnesses. They have not said whether they believe he committed a crime yet.

Buisdieker, who has a child in the school district, said she doesn’t think enough has been done about Marcum. Police told him to leave, but she said that he stuck around and made another fascist gesture.

“There’s no consequences to him whatsoever and I feel like if you don’t nip this in the bud it allows for these kind of things to take place,” she said. “Something needs to be done.”

The owner of the sports club where Marcum worked as a tennis instructor said that he will not be returning to teach this year.

Anti-mask activists at the meeting booed and shouted during the meeting to discuss the mask mandate, before Marcum stood up. According to the Metro Times, they said that masks are dangerous and that children can’t catch or spread the virus. Both of those statements are false.

One mother, Nicole Humphrey, told the meeting that she is pulling her daughter out of school because masks make her uncomfortable.

“Hearing that the only way she can attend in-person learning is by wearing a mask is unconscionable,” Humphrey said. “It is not going to happen. It is like asking us to knowingly send her to a place that is abusing her and being like, ‘Oh well.’ … It’s not Ok.”

Another person at the meeting cited religion.

“Our children will never see the freedoms we enjoyed growing up,” she said. “They are not even free to breathe fresh air. If God wanted us to cover our mouth and nose, he would have made us that way.”

The woman was wearing glasses.

Others spoke in favor of the mask mandate.

“We are doing this for the safety of our children,” said board president Lori Ajlouny. “I’m not fond of wearing masks, but I’m going to do what’s best for the children.”

Republicans in the Michigan legislature have introduced a bill that would ban school districts from requiring masks, a measure several other conservative states have taken. The bill has not yet passed.