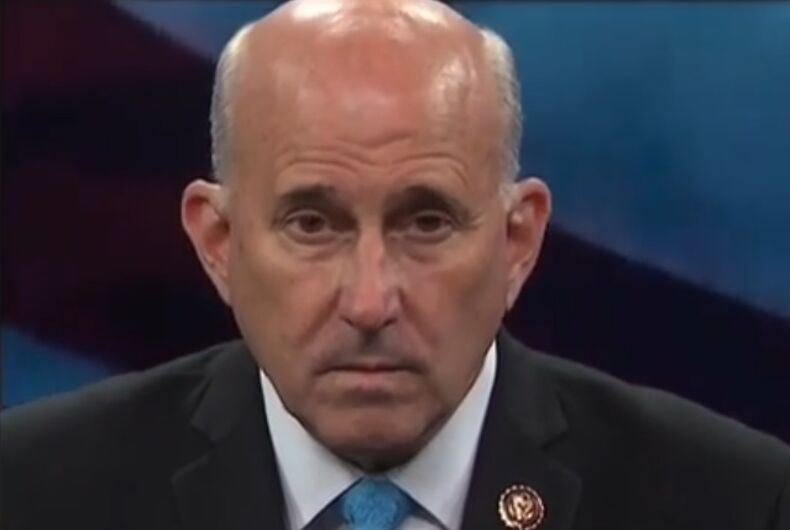 Rep. Louie Gohmert (R-TX) – who is well-known for his extremist and anti-LGBTQ views – has just tested positive for COVID-19.

Gohmert told CNN last month that he refuses to wear a mask because he gets tested regularly.

Related: Congressman Louie Gohmert says if El Paso shooter is charged with a hate crime, pastors will be next

“[I]f I get it, you’ll never see me without a mask,” he said at the time. He has since been spotted regularly walking around the Capitol without a mask and interacting with others.

Gohmert was scheduled to fly to Texas with Donald Trump this morning and he was screened for the virus to get clearance to fly when he tested positive, according to sources that spoke with Politico. He has also reportedly told his staff that he tested positive.

Yesterday, though, he was seen at a House Judiciary Committee without a mask.

Chair Jerry Nadler (D-NY) even stopped the meeting to chastise Republicans who were refusing to wear masks. Nadler told them “to stop violating the safety of the members of the committee. To stop holding themselves out as not caring by refusing to wear their masks.”

Gohmert can be seen with his mask down even though he likely had the virus at that point.

Fox tries to zoom in on Louie Gohmert because his mask is down.

Fox is a mask Nazi. pic.twitter.com/bIJRI27ll9

Gohmert isn’t just a run-of-the-mill Republican when it comes to LGBTQ issues – he’s one of the GOP’s stand-out opponents of LGBTQ equality.

In 2013, Gohmert was speaking with Tony Perkins of the anti-LGBTQ hate group Family Research Council and he said that allowing gay people in the Boy Scouts would lead to child molestation.

“You’re going to allow a situation where a seventeen-year-old guy that’s sexually attracted to other guys gets in a little tent with an eleven-year-old new rookie Boy Scout and they spend the night together, night after night at camp? I mean, come on,” he said at the time.

That same year, he compared homosexuality to bestiality and polygamy.

“And the problem is once you draw that limit; it’s kind of like marriage when you say it’s not a man and a woman any more, then why not have three men and one woman, or four women and one man, or why not somebody has a love for an animal?”

In 2014, he compared LGBTQ activists to Nazis on the House floor: “People like me are considered haters, hate mongers, evil, which really is exactly what we’ve seen throughout our history as going back to the days of the Nazi takeover in Europe.”

“First, they would call people “haters” and “evil” and build up disdain for those people who held those opinions or religious views or religious heritage,” he said in a House speech. “And then the next came, well, those people are so evil and hateful, let’s bring every book that they’ve written or has to do with them and let’s start burning the books, because we can’t tolerate their intolerance.”

Gohmert later appeared in a ridiculous documentary about how LGBTQ people may say they’re pushing for equality, but they really want “the criminalization Of Christianity.”

In 2016, he said that the Supreme Court decision that legalized marriage equality in the U.S. was equivalent to the Justices telling Americans to “forget what God said.”

“Basically, to my mind, they were ruling, ‘The five of us, we five Supremes, are now your God,’” he said.

Even in this Congress, he has continued his campaign against LGBTQ rights. In a hearing last year on the Equal Rights Amendment, which would ban discrimination on the basis of sex, Gohmert went on a rant about transgender women in public restrooms.

Last year, in a House floor speech about the Equality Act – which would add sexual orientation and gender identity to existing federal civil rights legislation – Gohmert accused Democrats of acting like they had “much more wisdom than” Moses.

Suddenly concerned with women’s equality, he said that the Equality Act would hurt cisgender women in order to “help the feelings of people who are gender confused, who are suffering gender dysphoria, the opposite of euphoria, we don’t want to hurt their feelings.”

"This is born out of good intentions; but, it is going to be destructive … if we are going to preserve the gains made by women under Title 9, The 'Equality Act' (H.R. 5) needs to fail and not become the law." — Rep. Louie Gohmert (TX-01)

Gohmert has gotten a score of “0” on HRC’s Congressional Scorecard for the last two Congresses, meaning that he opposed all LGBTQ legislation supported by the organization.

In 2012, Gohmert was one of five member of Congress – along with Rep. Michele Bachmann (R-MN) – to officially demand an investigation into the Barack Obama administration’s ties to the Muslim Brotherhood. They were even mocked by other Republicans.