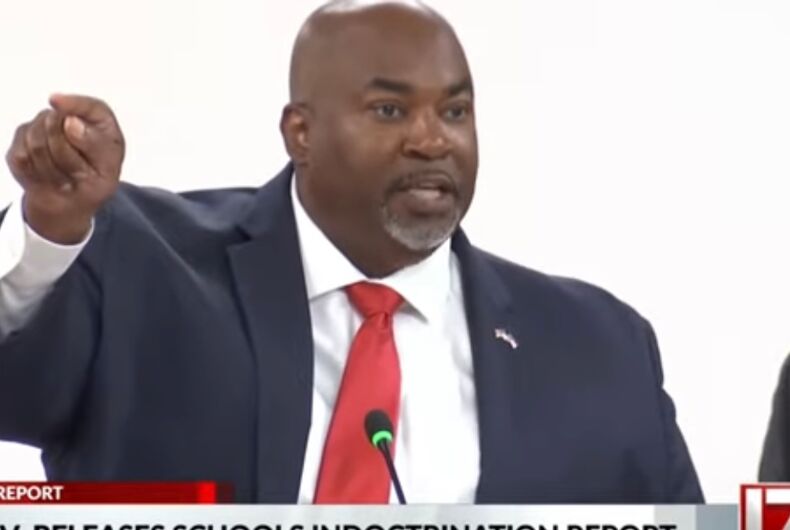 North Carolina Lt. Gov. Mark Robinson (R) released final reports from a task force he formed to investigate the “indoctrination” of children in state public schools. The problem is, many of the issues Robinson claims he’s heard about endlessly weren’t in the report.

Robinson specifically used a trans-inclusive book as an example in his report that teachers have been supposedly “abusing” children with. When a Democrat state representative questioned him about the report and said it seemed to be “Fox News-driven,” Robinson got so offended that he walked out the room.

Robinson is known for his anti-LGBTQ posts on Facebook. He has previously proclaimed that being gay is a step before pedophilia, that Michelle Obama is secretly a trans woman, and referred to trans-affirming people as “devil worshipping child molesters.” He also condemned gay people as an “abominable sin” in response to the 2016 Pulse massacre.

Robinson’s task force, the “Indoctrination in North Carolina Public Education Report,” took information reported by concerned parents and concluded that 13 specific concepts should not be “promoted” in schools. Robinson joined state Republicans as they held a Senate Education Committee meeting with public comment and media present to unveil the report.

They proclaimed that the report supports the need for House Bill 324, introduced by State Senate President pro tempore Phil Berger (R), written for “ensuring dignity and nondiscrimination” within schools by “prohibit[ing]… certain concepts.”

Except the report that was released didn’t include much of what Robinson or what state Republicans have claimed they constantly hear parents complain about. Instead, much of the reports the task force received complained about LGBTQ inclusion, if people didn’t complain that the task force existed at all.

One example Robinson gave of supposed “indoctrination” was the book George by Alex Gino which Robinson described in his report to be about a “biological boy” who “talks about cutting off male genitalia and hormone therapy.”

The book, released as an approved title for fourth graders by Scholastic and since retitled Melissa’s Story, is actually about a transgender girl named Melissa coming out to her family and her school peers, with the help of her best friend. It is on the American Library Association’s list of the 10 Most Challenged Books.

“This is an exact example of what we’re talking about,” he claimed.

Robinson said the task force “is an attempt to stop the abuse of the teaching profession by a few who are using that profession to put undue pressure on young minds. Those are the folks that are abusing that privilege,” he believes.

Others don’t agree with their framing. Many critics of the report note that teachers’ names, employers and information was released unredacted by the report, yet many of the complaints weren’t verified or even authenticated.

This press conference and HB324 are absolute distractions from the failure of the General Assembly to fund our public schools & the critical needs of our students. Don’t be fooled and don’t look away from the REAL crisis- the failure to comply with our constitutional duty. #nced https://t.co/pgyGvnPk0k

-1: Educators are named specifically and individuals who submitted info were redacted which is unfair.

2: Some of these "submissions" don't currently have students in the public school system. #nced https://t.co/aUqu8rD8hI

Reporters and legislators that went through the report and publicly available submissions challenged Robinson and his GOP colleagues’ conclusions.

WNCN reported that “more than 500 submissions” were published by the task force, among them people claiming that using CNN or the New York Times articles was supposed indoctrination, and some “questioned how sexuality was being taught in schools.”

Asked how the findings support what they’ve been claiming, Berger simply said the goal of the task force was to “make sure that information is made available to students but not to promote specific concepts,” which is how education usually works.

“This week marks the first week of our kids going back to school. I feel that we should be spending time this week honoring our children,” Chaudhuri remarked at the conference. “Instead, we’re spending time debating a Fox News-driven issue that’s more about fear-mongering and has turned into a fishing expedition.”

Robinson, yelling, told Chaudhuri in front of cameras, “The parents, teachers and students of North Carolina demanded it! To sit here and call it a Fox News-driven issue, when I have stood with teachers who cried because they feel like their jobs and livelihoods and professions have been threatened, for you to call it that is an insult. An absolute insult!”

He continued to try and chastise Chaudhuri, screaming, “You know where my office is, and you [knew] that this task force is going on. All of this is driving me nuts.”

He then left before the meeting was opened to public comment.

“This bill is in search of a problem that does not exist in our classrooms,” Chaudhuri concluded after.

He condemned his colleagues for “trafficking in fear-mongering,” because their agenda is “not based on facts. There are many avenues for parents to pursue if they feel like their children are being indoctrinated.”

Democrats reportedly remain confident that regardless, Gov. Cooper will veto any bill unduly restricting education. While Republicans have the majority in the state legislature, they don’t have a veto-proof vote in either chamber.