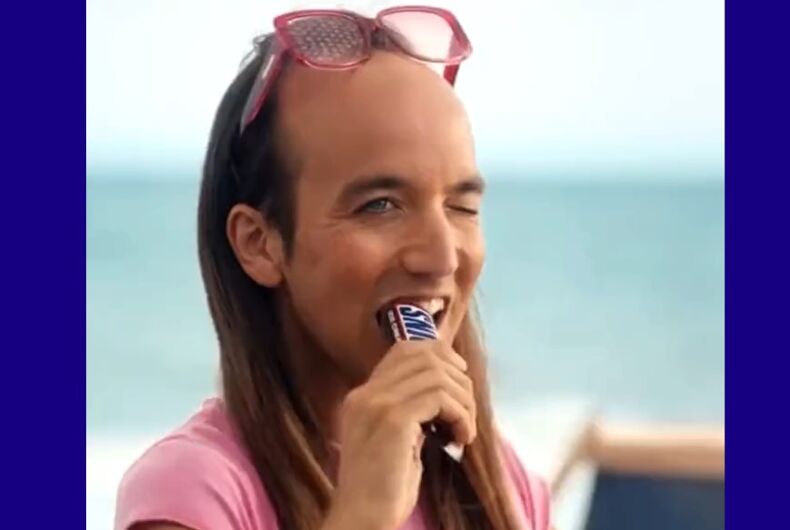 Snickers is about to conversion therapy this unsuspecting man.Photo: Screenshot

Snickers is apologizing for what was they say was supposed to be a humorous ad where a Snickers bar turned a flamboyant gay man into a bearded, butch man.

The Spanish ad features influencer Aless Gibaja and another man ordering at a restaurant. Gibaja asks the waiter for a “sexy orange juice… with vitamins A, B, and C” and sent the waiter kisses and hugs while the other customer and the waiter exchange horrified glances.

Related: A sketch show made a hilarious parody of a homophobic TV ad

The waiter instead gives Gibaja an ice cream Snickers. Gibaja takes a bite and is transformed into a bearded man who appears stereotypically straight.

“Better?” the other customer asks him.

“Better,” he responds in a deep voice.

Text on the video says “You’re not yourself when you’re hungry.”

The ad came out last month but started getting criticized on Spanish Twitter for homophobia this past week.

“How do you keep making campaigns like this?” tweeted Mario Montes.

Congress of Deputies Member Íñigo Errejón called out Snickers for mocking feminine men and said it was inappropriate in “a summer in which attacks on LGBTI people multiplied.” He was referring to, among other attacks, 24-year-old Samuel Luiz who was beaten to death in the street by a mob shouting “fag” and accusing him of looking at them.

Another person called the ad “femme-phobic” and “repugnant.”

“If you need some training for your next try, we’re here,” the organization tweeted.

Even Spain’s Minister for Equality, Irene Montero, said that the ad used “homophobia as a business strategy.”

By Thursday, Snickers Spain had apologized for “any misunderstanding” and said that they understood that the “message could be misinterpreted, we will immediately end the campaign.”

“In this campaign, we wanted to convey in a nice and humorous way that hunger can change your character,” Snickers Spain said in a statement. “It was not intended to stigmatize or offend any person or community.”