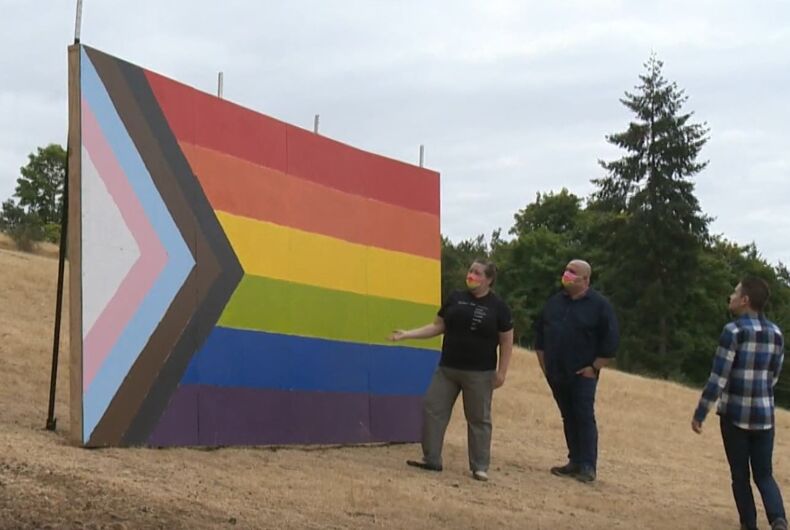 Residents of an Oregon town banded together to make a giant Pride flag after their school board voted to ban it and other “divisive symbols.”

“I wish it could be 10 times bigger,” Erin McCarthy said. She and her husband Jaybill own land on a hill about a mile and a half from Newberg High School where the giant flag was installed so that students could see it.

Related: Hundreds of this gay student’s classmates rallied outside school to show he wasn’t alone

Last week, the Newberg School Board voted to ban any “political” speech from their schools, pointing to Pride flags and Black Lives Matter signs as examples of “divisive” messages that, they claimed, make white and straight students feel excluded.

“It has to be for all kids,” said school board chair Dave Brown.

But the McCarthys didn’t like the sound of that.

“‘We’re going to erase a bunch of people,’ is what it felt like to me,” Jaybill told KGW8.

The couple shared their plan to build a giant flag visible from the high school on social media and they got responses from hundreds of people. Some donated money for materials and over the weekend a group got together to build the flag.

Using the Daniel Quasar Progress Pride flag design, they painted it in pieces on wood and then mounted them together.

“We wanted maximum visibility,” Erin said. “The result is pretty amazing, we love it.”

“It’s not expressing a Democratic idea or Republican idea or conservative or liberal,” she continued. “It’s human beings.”

The word “LOVE” is also painted in rainbow colors on their barn.

While the school board voted in favor of the policy to make white and straight students feel better at school, a Black mother explained that her son faces discrimination in school.

Tai Harden-Moore said that her son doesn’t feel safe “because my son was called a [n-word] in school.”

Other parents supported the ban on symbols of inclusion, with some saying that the Pride flag is for “deviants.”

Erin said that her message with the flag is: “You are not alone. Even though this is difficult, there are people who are there for you.”

LGBTQ youth are scared to go back to school. Here’s what schools can do.